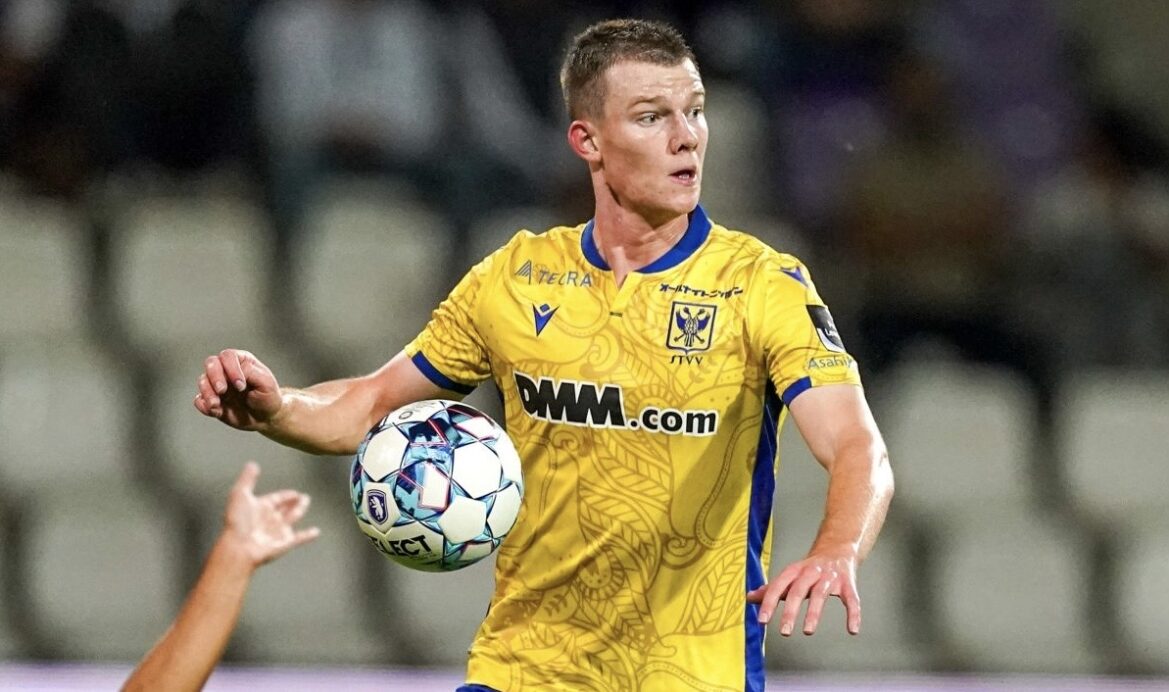 The 2019 U.S. Under-20 World Cup team that reached the quarterfinals of that tournament was one of the more stacked U.S. youth teams in recent memories, with nearly half of the 21 players on the roster having already made their debuts with the U.S. men’s national team in the two and a half years since despite none of the players being older than 22 yet.

One of the 21 players who has yet to earn that first senior cap is Chris Durkin, a starter on Tab Ramos’ team in 2019, and now a consistent starter in the Belgian Jupiler League with St. Truiden since completing a $1.1 million transfer from D.C. United.

The 21-year-old midfielder is not currently in Gregg Berhalter’s USMNT plans, but that isn’t stopping Durkin from thinking about the future and about the possibility of joining his former U-20 teammates such as Sergiño Dest, Tim Weah and Chris Richards on the senior team, if not in 2022 then in the years to come, potentially in 2026 when the FIFA World Cup will be played in the United States.

“I think if you’re a young American player, everybody’s radar is on the 2026 World Cup,” Durkin told SBI. “That’s a dream to play a World Cup in your home country, and that’s definitely a big motivator for me. I would say more than a lot of a lot of other things.

“Being able to represent your country, I’ve had the the honor to do that at the U-17 and U-20 World Cup. I definitely missed that feeling of representing your country and giving everything for that badge,” Durkin said. “I can definitely say, if I was given that chance again it for sure would not be taken lightly. That’s definitely a big motivation for me, and definitely continuing to find the best place for me to, to hopefully put myself in that situation.”

Durkin has flown under the radar the past two years plying his trade in Belgium, since leaving D.C. United for St. Truiden in 2019 on what was initially a loan before a successful first season led the Belgian club to complete a full transfer. He is in his third season with the club and has amassed 60 appearances, playing a variety of positions, though more recently having settled back into a midfield role.

“I’ve bounced around in different places, such as centerback, I played at right wingback actually a couple of games here in Belgium. At the eight, at the six and I’ve been predominantly a six my whole life and still would kind of view myself more as, but I’ve been playing a lot more as the eight, and that’s definitely more of the box-to-box, trying to influence the game more on the ball, in the the attacking side and creating chances and finding those pockets in the middle to get on the half turn. The really difficult areas where it’s tight space.

“All that has really helped helped me in my understanding of just the midfield role and all of those positions, and just having that understanding and that knowledge just helps gain more and more experience,” Durkin said. “And that’s what all these minutes have been about. It’s just experience and I’m a much more experienced player and that’s all you want from developing at a young age and progressing on in your career.

It was Durkin’s 2020/2021 season which helped put him back on the radar of European scouts, with clubs from Germany to Italy expressing interest in his services. A move didn’t materialize last summer, but

“Eventually I do want to make the jump to whatever I view as the best next step for me, and my development, because I’m still only 21,” Durkin said. “I’m still just always looking for the right fit and so far St. Truiden has been the right fit for me.”

The Belgian League has become a popular destination for American players in recent years, with Kyle Duncan the most recent to join the influx from the United States, including Sam Vines at Royal Antwerp and Mark McKenzie at Genk.

“I think it’s a great move for anybody coming to to Belgium,” Durkin said. “It’s a good tier to making the next jump to an even higher level, like the Bundesliga or something like that. It’s a great stepping stone for development for young players. You know, you see on teams and every team in Belgium, there’s young players playing, and getting that experience.

“The league can definitely not be underestimated,” Durkin said. “It’s a very difficult league, in my opinion. Very physical, a lot of really technical and talented players, so I think it’s a great stepping stone and it’s been perfect for what I wanted it to be, and I know it will be for all these other guys like Mark and Sam and these guys.”

With one more year remaining on his contract after the current season, Durkin could find himself on the move in the transfer market for a St. Truiden team fighting to avoid relegation. Interest from Europe as well as from MLS could lead to a move for the 21-year-old, who has been in and out of the lineup over the past month of the season.

A return to MLS would be a full-circle moment for the former D.C. United academy product, who signed with the D.C. United first team in 2001 at the age of 16, just a year after signing a pro deal with the USL’s Richmond Kickers when Durkin was 15.

Part of Durkin’s motivation for leaving MLS was to seek consistent playing time after struggling to find minutes as a teenager with D.C. United. Three years later, Durkin is now a seasoned veteran, and a player who multiple MLS teams have expressed interest in adding before the 2022 season.

Whether he returns to MLS, or makes a move to a new European destination, is confident he is well-equipped to succeed as he looks to climb the next run in his ladder of development, knowing how far he has already climbed.

“I’m just really proud of the steps I’ve taken so far and the way my path has gone, it definitely hasn’t been the easy path so far,” Durkin said. “There’s been a lot of ups and downs, definitely, but that’s made me into the person person that I am now. And I wouldn’t change that for anything.

“It hasn’t been easy, but it’s definitely created layers on my skin, and it’s going to be pretty hard to take me down. So, I’m just really proud of the career I’ve had so far, and I’m really looking forward to what’s to come.”