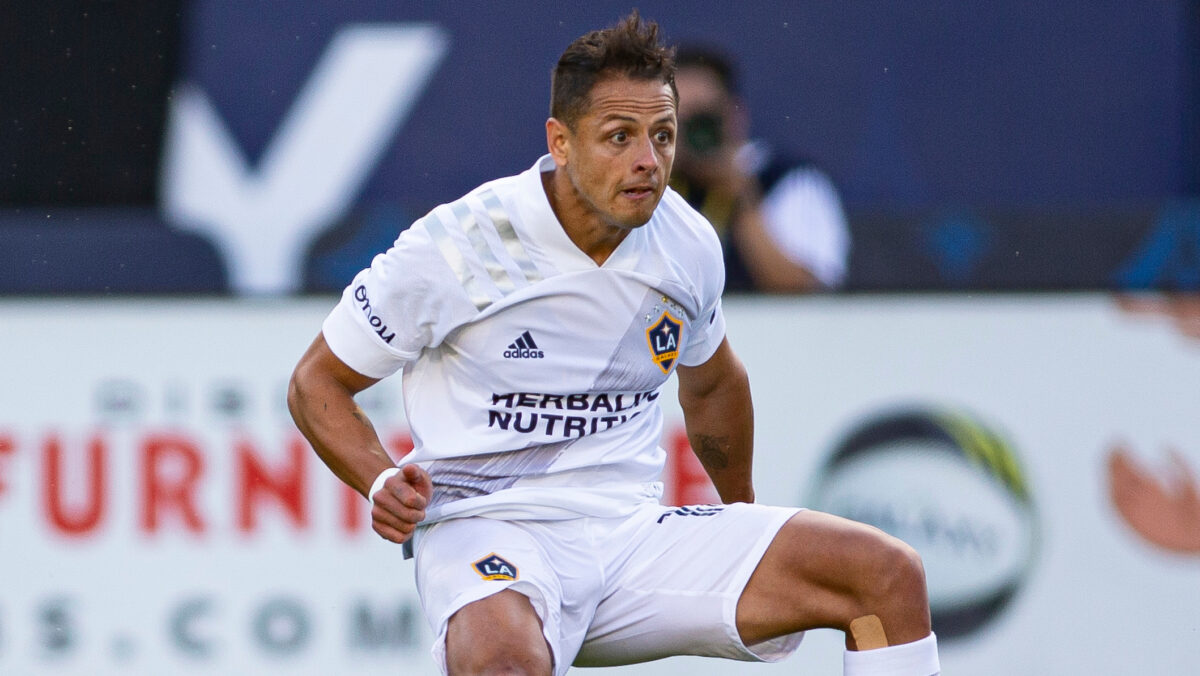 At one point during the 2021 MLS season, the LA Galaxy were a top-three team in the Western Conference led by a Golden Boot candidate in Javier Hernandez and it seemed like Greg Vanney was pushing all the right buttons in his first season as manager.

Fast forward to the end of the season and the Galaxy failed to clinch a playoff spot on the final day of the regular season, winning one of their last 17 matches and finishing the year in 8th place out West.

“I’ll speak for myself and for the guys that I’ve spoken with and say we were embarrassed about how the season ended,” said Vanney. “We only have ourselves to blame and we had too many opportunities that we let slide and I think we as a group have to mature from that.”

Even with the hot start for the Galaxy, their demise at the end of the season was somewhat predictable.

After inheriting one of the worst rosters in the league when hired, Vanney overhauled every positional group, adding 10 new players and relying heavily on players from outside of Major League Soccer made it challenging to build a cohesive unit.

“The understanding of what we want to do on the field is just in a whole different starting spot than we’re where we were last year at this time,” said Vanney. “We have to take another step forward now that the guys have played together and know each other’s strengths and weaknesses.”

Signing goalkeeper Jonathan Bond on a free transfer from West Bromwich Albion was a smashing success with the 29-year old locking down a starting role between the posts and becoming one of the best shot-stoppers in the league during his first season.

On the contrary, the quartet of players signed from France was a mixed bag at best with Rayan Raveloson showing the most promise and establishing himself as a starter in the midfield after joining the Galaxy from Troyes midseason.

Heading into the 2022 season, Raveloson is a likely starter in the midfield, but Kevin Cabral and Samuel Grandsir struggled to adapt to Major League Soccer while defender Sega Coulibaly looked good in spurts, but struggled with injuries.

“They both have the tools to be very successful, and we need to refine a few things as we work through this preseason,” said Vanney on the two French wingers.

“Last year we didn’t get to really work with them in the preseason. So this is a good opportunity for us to start to attack those things right away.”

As for Cabral, the Galaxy are still expecting big things from the Young Designated Player who was signed for a fee of more than $5 million Valenciennes FC last season.

“Kevin’s gotten a lot stronger,” said Vanney. “A year ago when he came in he was like a wet noodle, he hadn’t touched the weight room and you could tell he needed to get more explosive.”

Though it is just preseason, Cabral is trending up ahead of his sophomore season in MLS, scoring a brace in the Galaxy’s 4-0 win over the New England Revolution in early February.

At striker, the Galaxy are still led by Javier “Chicharito” Hernandez, with the Mexican superstar coming off a 17 goal season and proving when healthy, he is an elite goal scorer in the league.

The Galaxy have also added Douglas Costa as their third Designated Player and the Galaxy are hopeful that Costa can provide another dimension to an attack that was very reliant on Hernandez last season.

“There are levels of good [players] and he is at the top level,” said Vanney in Costa’s introductory press conference. “We’re super optimistic that he’s going to help tilt the bar to us to help us become a championship-caliber team this year.”

Defense still remains a question mark for the Galaxy, but the five-time MLS Cup Champions are a good bet to improve in year two under Vanney. There is a clear core in place and with a trio of Designated Players leading the attack, making noise in the playoffs is the goal.

It is no secret that the LA Galaxy like to sign big-name players — enter former Bayern Munich, Juventus, and Brazillian national team winger Douglas Costa.

On name alone, Costa fits the bill for a Designated Player, but he brings plenty of potential injury risk and comes to Los Angeles after enduring a difficult loan spell with Gremio in Brazil, providing just three goals and two assists in 26 appearances.

When on his game, Costa is an elite playmaker with flashy dribbling skills that can propel the Galaxy to another level alongside Javier Hernandez and Kevin Cabral.

Pressure is on: Kevin Cabral

The aforementioned Cabral failed to live up to his price tag and Young Designated Player status in his first season with the Galaxy.

In 28 matches last season, Cabral chipped in a modest five goals and flashed a considerable skillset but too many times he was not clinical enough in front of goal.

“For this year, it is all about final products,” said Vanney on Cabral.

“If he would have put away his chances, he probably has 10 plus goals last year and we believe he can do that this year with the right work the right preparation.”

Cabral has put on muscle in the offseason and looks like a new player in preseason matches, but the pressure is on the Frenchman to realize his potential and become a key player for the Galaxy.

The first season under Greg Vanney was all about bringing in new faces and establishing a culture, in year two consistency and team chemistry is the name of the game.

Aside from the addition of Douglas Costa and trading for Mark Delgado, Vanney’s first full offseason with Galaxy has been quiet on the acquisition front, with the subtractions from last season’s roster being more notable.

Former Designated Player Jonathan Dos Santos has joined Club America on a free transfer and Sebastian Lletget was traded to the New England Revolution for $500,000 in General Allocation Money upfront that could hit $800,000 with incentives.

The addition of Delgado is a familiar face from Vanney’s time with Toronto FC and brings the Glendora native back to where he began his professional career as a homegrown player with Chivas USA.

“Last year overall I think this was a good team that at times lacked being much of a threat going forward,” Delgado told SBI.

“I feel like my role is to connect things, whether that means rotating back so, we don’t get quickly countered, or if we need someone to stretch out their backline, I’m confident in what I bring to the table.”

In terms of the midfield alignment, the Galaxy will likely deploy a 4-3-3 formation with Rayan Raveloson flanking Delgado as dual number 8’s.

“Greg right away brought us in together and at first it was a bit of a struggle, but as we’ve played more together things are really starting to open up for us,” said Delgado.

Who starts ahead of Delgado and Raveloson in the center attacking midfield position remains to be seen. Victor Vazques received the lion share of minutes as the primary playmaker last season, but he dealt with his fair share of injuries and turned 35 in January.

Vanney singled out 19-year-old Efrain Alvarez as a player who he is hoping will be able to play meaningful minutes as a central playmaker.

“I played with his brother Carlos, so Efrain has been someone I’ve always been curious about,” said Delgado.

“He’s a quality player,” “He’s shifty and a great guy off the field so I’ve been really impressed with him and he’s had the right attitude going into everything.”

If the midfield and the attack are to be considered the Galaxy’s strengths going into the season, the defense is the biggest question mark after conceding 54 goals last season.

The addition of Delgado to the midfield is a boost to the overall defensive identity of the Galaxy, giving them a more traditional destroyer that can provide cover to the center-backs.

‘I think the guys feel more confident,” “We’ve got each other backs and we want to just take the life out of the other team, and not let them out of our pressure,” said Delgado.

As for the center-back pairing, Derrick Williams and Sega Coulibaly are expected to be the preferred pairing with Nick DePuy as the third-choice option.

Long-time member of the Galaxy backline, Daniel Steres was traded to Houston Dynamo FC in the offseason, opening up minutes for U.S. U-20 international center-back Jalen Neal to stake his claim as an important part of the future.

“Jalen is someone I have huge, huge hopes for,” said Vanney. “I think he could be an outstanding center-back not only in this league, but he can also go play at a high level, he just has such a unique mentality for a centerback.”

At fullback, Julian Araujo is the incumbent starter on the right side and is a full-fledged Mexican international in contention for a World Cup roster spot assuming Mexico qualifies.

Behind him, the Galaxy added Kelvin Leerdam as a depth piece who brings playoff experience from his time with the Seattle Sounders and is a direct replacement for Oneil Fisher.

On the left side, Jorge Villafana started the season as the preferred choice for Vanney, but his minutes dwindled down the stretch and Raheem Edwards was signed as another option at left-back.

Last season for LAFC, Edwards played across the field for the Black and Gold, but like Delgado, he spent time in Toronto with Vanney and knows what is expected of outside backs in Vanney’s system.

Overall, the Galaxy have added depth in key areas and are optimistic that year two of the Greg Vanney era will see them as a contender come playoff time.

“It’s step by step, but we will get there,” “The ultimate goal is to win championships and that’s what everyone’s mentality is,” said Delgado.