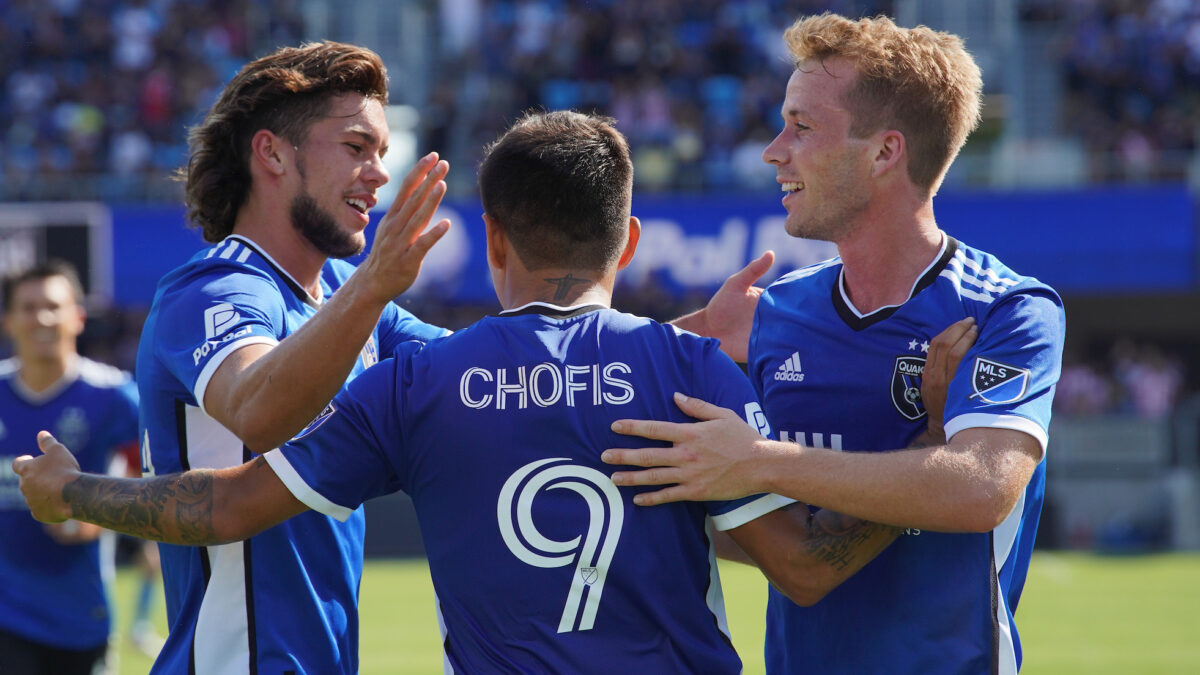 The San Jose Earthquakes ended their season with a bittersweet farewell speech from MLS all-time leading scorer and club legend Chris Wondolowski, who fittingly scored in a 1-1 tie against FC Dallas.

It was one of the few positive highlights from an otherwise disappointing Earthquakes season that culminated in a 10th-place finish in the Western Conference.

After making the playoffs in the 2020 season, their struggles last year have led to lingering questions about the future of head coach Matias Almeyda as he enters the final year of his contract.

As a result, players like Oswaldo Alanis, Andy Rios, and Carlos Fierro (acquisitions influenced by Almeyda) have departed from the team. Although Javier “Chofis” Lopez (another player of Almeyda’s era) is on his last 6 months on loan from Chivas, leaving many to wonder about his future with the club.

Lopez had 12 goals and 4 assists last season, but keep in mind that six of those goals were from a 3-game stretch in September. Chofis only registered 1 goal and 1 assist after that month.

As a response, general manager Chris Leitch has brought in Jamiro Monteiro and Jan Gregus to have as additional creative options in the midfield. Monteiro (brought in as a designated player) was acquired from the Philadelphia Union for up to $450k GAM and an international roster spot. While Gregus, a former DP, was signed in the 2021 MLS Re-Entry Draft with an option for 2023.

Their quality will help alleviate pressure from the Chofis situation and does not interfere in opportunities for the up-and-coming wingers. Monteiro played on the wing for the Union a few games in 2021, but preferably plays in the middle as a central attacking midfielder or a little withdrawn as a central midfielder.

Gregus can play further in the back of central midfield next to a defensive midfielder and spray passes forward. This could lead to players like Cade Cowell and Jeremy Ebobisse to have a more productive year in the attack, especially in dead-ball situations.

Costa Rican international Francisco Calvo is another reinforcment from the free agent pool after a few years with Chicago Fire FC, with an option for 2023. He is a durable option that can compete for a starting role.

The three new signings bring more options for Almeyda to use in the starting lineup or bring off the bench. Their MLS experience will also be valuable for a side with an average age of 24.

“We thought hard about it,” said Almeyda. “What space we needed to occupy, and those were three spots that I thought we had to reinforce and hopefully the guys that arrived are able to adapt quickly with our our work and can enjoy it along with everyone else, including the fans.”

On paper, the Earthquakes have a roster that can make things interesting for the season. There is potential, but there are also plenty of questions in the roster for San Jose fans to wonder and see how it all plays out in the short run.

Here is a closer look at the 2022 San Jose Earthquakes:

The Cape Verde international is looking for a fresh start in San Jose after being pushed out of the depth chart in Philadelphia. He received a 2023 guaranteed contract with a team option for 2024. A deal that his previous club was reluctant to offer.

Now with a new setting, he looks to make strong contributions as a No. 10. His creativity will give players like “Chofis” Lopez and Cristian Espinoza more freedom to aggressively attack from the wings. It does give dynamic options for Almeyda on how to setup his offense.

He did play the entire 2nd half of the last preseason match against Sacramento Republic FC just days after the acquisition took place. His positive participation in January at the AFCON tournament has made him more than ready to start when they host the New York Red Bulls at PayPal Park on February 26th.

Pressure is On: Cade Cowell

The 18-year-old looks poised for a more consistent year after recently signing a 4-year contract extension with a team option for 2026. This capped a year where he became an All-Star and received his first call-up to the USMNT.

His last season was a tale of two halves, as he only started once after August. However, Cowell performed well this preseason with 2 goals and 3 assists with all signs pointing to him gelling well with Ebobisse up top.

The club would need their young star to really step it up in his output if they are to make the playoffs. Hopefully he will get consistent playing time to provide a career break-out year. The pieces that surround him in the attack makes it a strong possibility.

San Jose still needs more improvement to compete in the strong Western Conference and advance in the playoffs. The uncertainties surrounding Almeyda’s future could be a big part as to why the roster is how it is now, before Leitch makes more decisions.

For now at least Leitch has secured the futures of key youth players such as Tanner Beason and JT Marcinkowski. Both received well-earned contract extensions through 2024 with an option for 2025.

However, they will still need more help because of the lack of depth. Especially in the flanks where Cowell had to cover in several occasions last season. Yueill was also used outside his usual midfield position, as he played as a central defender at times and has played there the entire preseason.

This could lead to Almeyda using a 3-4-3 formation to help cover the weaknesses in the backline. The 3-man line has been made up of Tanner Beason, Jackson Yueill and Francisco Calvo for every preseason match.

“We’ve been working with a few different systems and that’s definitely one of them,” said Yueill. “But the challenge will be getting everyone on the field at the same time and try to do it really well with the players that we have.”

This includes formations where Yueill has switched at times with Judson between positions. In other words, they are trying to prevent blowouts like the ones from last year, where they didn’t have an answer for their opponents’ counterattacks.

Up top, Ebobisse has been very active in preparing for a strong 2022. He changed the offensive outlook of the squad instantly after he was acquired mid-season before the concussion happened. Now the offseason has given him time to thoroughly have chemistry with his teammates.

The rest of the team layout is straight forward with the usual tinkering from central midfield to the wings, but don’t be surprised if Almeyda ever goes back to his traditional 4-2-3-1 if things don’t work out with his new formations. Whether it will revert to man-to-man or continue with zonal coverage is anyone’s guess.