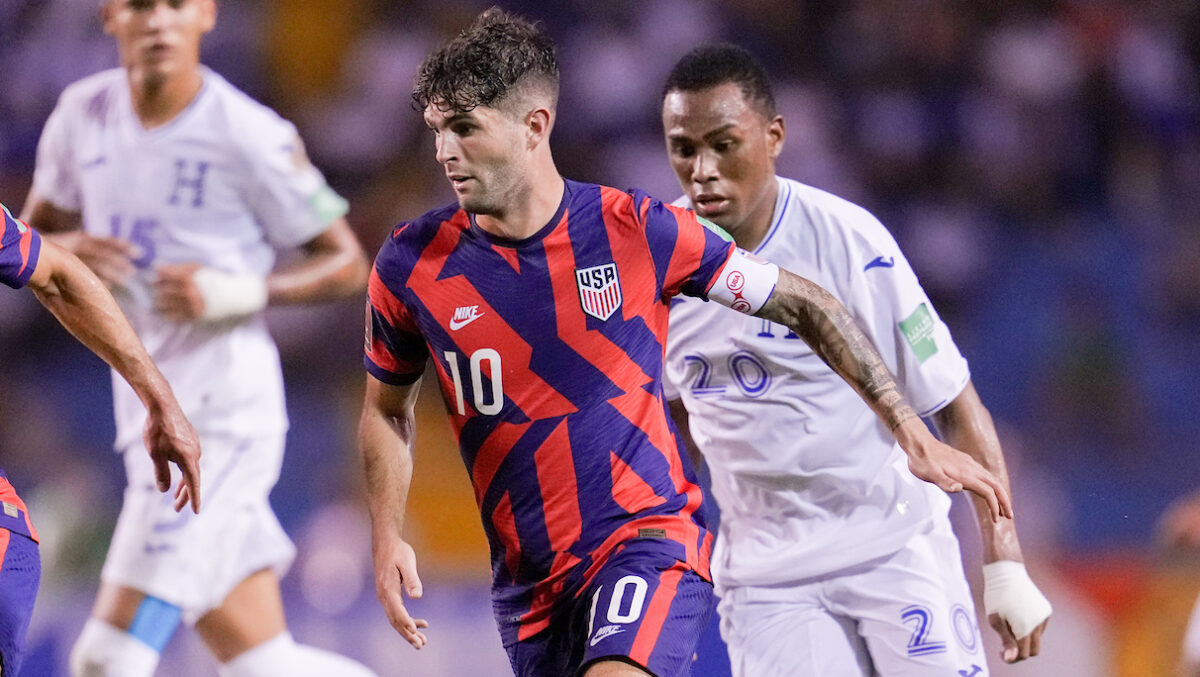 The U.S. men’s national team remains very much alive for a qualification spot in the 2022 FIFA World Cup, but Wednesday’s home showdown with already-eliminated Honduras (7:30 p.m. ET, Fox Sports 1) just became that much more important as the Americans try to deliver a bounce-back performance.

Following Sunday’s 2-0 road loss to Canada, Gregg Berhalter’s side sits four points back of the top spot in the octagonal round standings, and remains closely followed by Mexico and Panama in the race for the top three. Honduras visits Allianz Field already eliminated from World Cup qualifying contention and low on confidence, with only five goals scored and a -14 goal differential through 10 matches played.

Regardless of Honduras’ situation, the USMNT is prepared for anything the visitors throw at them on Wednesday night.

“The pressure is there automatically, but I think we’re at our best when we have fun with the game,” midfielder Weston McKennie said in a conference call Tuesday. “We have one mindset and that is to earn three points in every game. We have to be prepared for anything from Honduras and just focus on trying to play our game.”

“I think we go out, play hard, and try to win the game,” Berhalter said. “It’s not time to panic yet. We still are in a very good position to qualify and we can take another step towards that with three points tomorrow. We can’t really focus on what Honduras is going through, we have to focus on ourselves and our goals.”

Honduras comes into Wednesday’s match riding a six-match losing streak in qualifying matches, being outscored 14-3 in that span. Hernan Dario Gomez’s squad has had little success during the octagonal round and will be playing for pride in their second meeting with the USMNT in six months.

Alberth Elis, Romell Quioto, and Anthony Lozano remain a deadly trio of attackers for the Catrachos and will be well rested after not starting Sunday’s 2-0 loss to El Salvador. The USMNT will need to be wary of all three players, knowing Honduras can afford to take risks now that qualification is out of the picture.

“You can say they can play more open now and more freely, so it’s a dangerous opponent,” Berhalter said. “In World Cup Qualifiying every opponent is difficult. I don’t think they’ve been as bad as their results have shown, their expected goals per game is very high and should be scoring more than they have been.

“Alberth Elis is dangerous in the final third, strong and dominant in the 18-yard box, good on crosses,” Berhalter added. “They also have [Romell] Quioto and [Anthony] Lozano who are good players and tricky in possession, so for us it’s going to be about how to keep the tempo high and how to wear them down so we can score goals and win the game.”

The USMNT will be without midfielder Tyler Adams and centerback Chris Richards due to respective injuries, forcing several players to step into the starting lineup on Wednesday night. Both players started against El Salvador and Canada earlier in the window, but were unable to play the full 90 minutes in Hamilton on Sunday.

Walker Zimmerman is the likely replacement for Richards in the backline while Kellyn Acosta is the logical option to replace Adams in midfield. Berhalter will have several decisions to make involving his lineup, but still has plenty of available talent in his squad overall.

“Defensively he’s an absolute all-star, the plays he makes are unbelievable,” Berhalter said about Adams. “He’s going to be a huge miss for us, but we feel we have plenty of guys who can cover ground and fill that role in the starting lineup. We are confident in the guys we have.

“We will have to figure out the best way to hurt Honduras because when you look at them, they are strong in offensive transition,” Berhalter added. “We want to be balanced, but we also want to create scoring chances, so maybe we move Christian to the No. 10 spot like in the final minutes of the Canada game. There’s still a lot to consider.”

Offensively, the USMNT will look to be better in the final third after only scoring one goal in the past 180 minutes. Star winger Christian Pulisic has been quiet over the past two matches while Brenden Aaronson and Yunus Musah have also failed to create much of an impact in the final third.

The USMNT struggled to break down Canada’s stingy defense on Sunday, ultimately walking away with zero goals and zero points in the defeat. With the home-field advantage being on their side, the Americans will hope to get after Honduras and take advantage of an opponent low on confidence and form.

“We’re a young team,” McKennie said. “We’re a team that can run. We’re a team that loves to press. We’re a team that is most effective and create a lot of our chances from winning balls and pressuring and going straight to goal. I think we kind of held back on that these past two games and didn’t use it to its full ability, I guess. Being effective in the final third and scoring the goals and the opportunities that we get, if it is one or two times a game, I think it’s very important to be effective.”