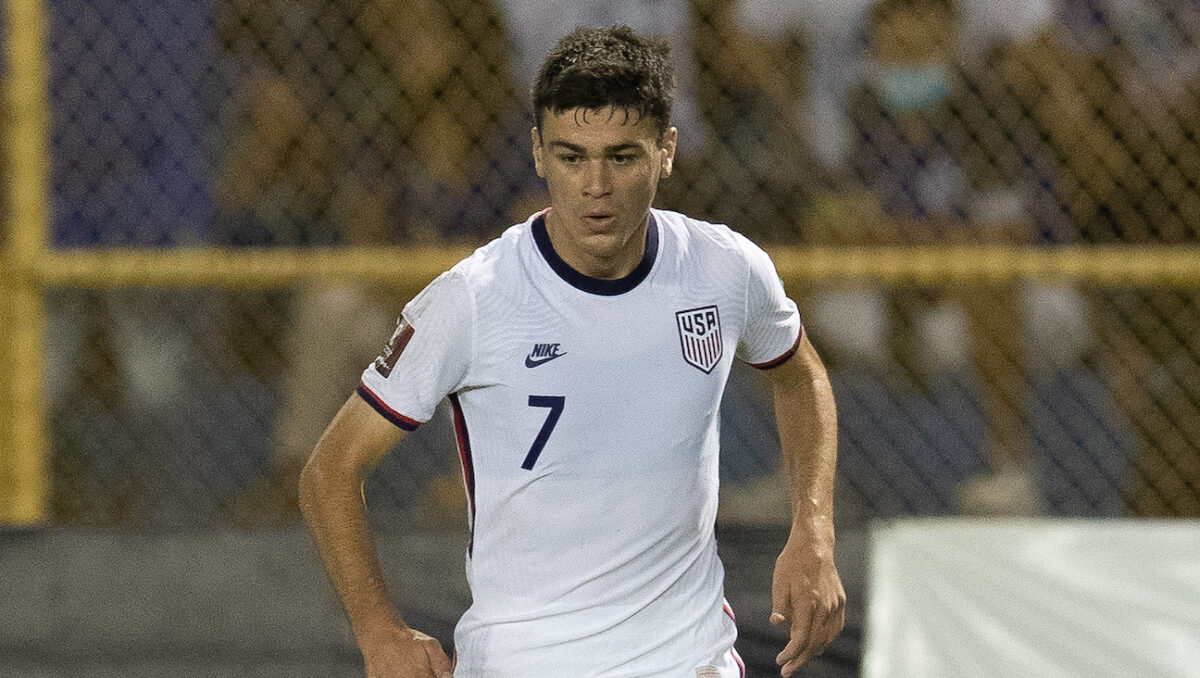 Gio Reyna is back with the U.S. men’s national team after a six-month hiatus due to injury and although the American playmaker didn’t have plenty of minutes under his belt in 2022, he is ready to get back to his best.

Reyna is on the verge of making his first international appearance since September after a grueling spell on the sidelines over the past six months. After suffering a hamstring injury against El Salvador last September, Reyna has made his way back into the USMNT picture after putting together a string of appearances for Borussia Dortmund.

The 19-year-old logged his first full 90-minute appearance in more than five months against Cologne and also registered his first assist in a 1-0 victory over Mainz on March 16. Reyna’s role with the USMNT remains undetermined for matches against Mexico, Panama, and Costa Rica in this window, but having him back fit is a major plus for the make-or-break period.

“I just want to help the group,” Reyna said in a conference call Tuesday. “I know I can help the group, just with my playing and just being here. Obviously, I’ve been in the group in the past many times. We have really important games and our main goal is to go the World Cup and that’s what I’m here to help us do.

“I’ve built up a lot of strength over the last the last two months or three months, so I’m pretty confident in my body at the moment,” Reyna added. “It was great to get 90 minutes before coming into camp. It gave me a huge boost of confidence, knowing that I can do it now.”

Reyna’s return to the USMNT comes at a welcomed time for Gregg Berhalter and his staff, not only due to the importance of these final three qualifiers, but also due to the absence of several other starters. Weston McKennie, Sergino Dest, and Brenden Aaronson are three key players who will not be available for the upcoming window due to respective injuries, forcing Berhalter to make plenty of key decisions regarding his squad.

Reyna has been used in a number of different roles for Borussia Dortmund and the USMNT, featuring as a winger, forward, and attacking midfielder. His versatility will be important for the USMNT over the next week and Reyna remains open to wherever Berhalter decides to use him on the field.

“I’d feel perfectly comfortable playing there [in the middle],” Reyna said. “Obviously Weston [McKennie] does a lot for the team, but I can try to fill his shoes if I need to, if I’m asked. And I’m sure there’s other guys that are capable of doing it too.”

Reyna’s international schedule might come to a close for the time being after this window, but his club schedule will pick back up in April as Borussia Dortmund remains in the fight for the Bundesliga title. Marco Rose’s side sits six points behind Bayern Munich with seven league matches left to play this spring, including a Der Klassiker showdown at the Allianz Arena on April 23.

The goal for Reyna will be to play a hand in the final seven matches of his club season and not only help Dortmund qualify for next season’s UEFA Champions League, but also possibly edge Bayern Munich to the league title. Reyna’s immediate focus remains on the USMNT for the next week, but returning to Dortmund injury-free is also at the top of his wishlist.

“I’m definitely going to be managed in some sort of way, but we’ll see,” Reyna said. “We’re figuring it out now. The main goal is obviously to qualify and then obviously to leave the camp healthy. So yeah, we’re going to be smart with it.”

“It’s going to take some time,” Reyna added. “I was off for a long time so I understand that. I’ve got to take it one day at a time and just try to try to improve.”