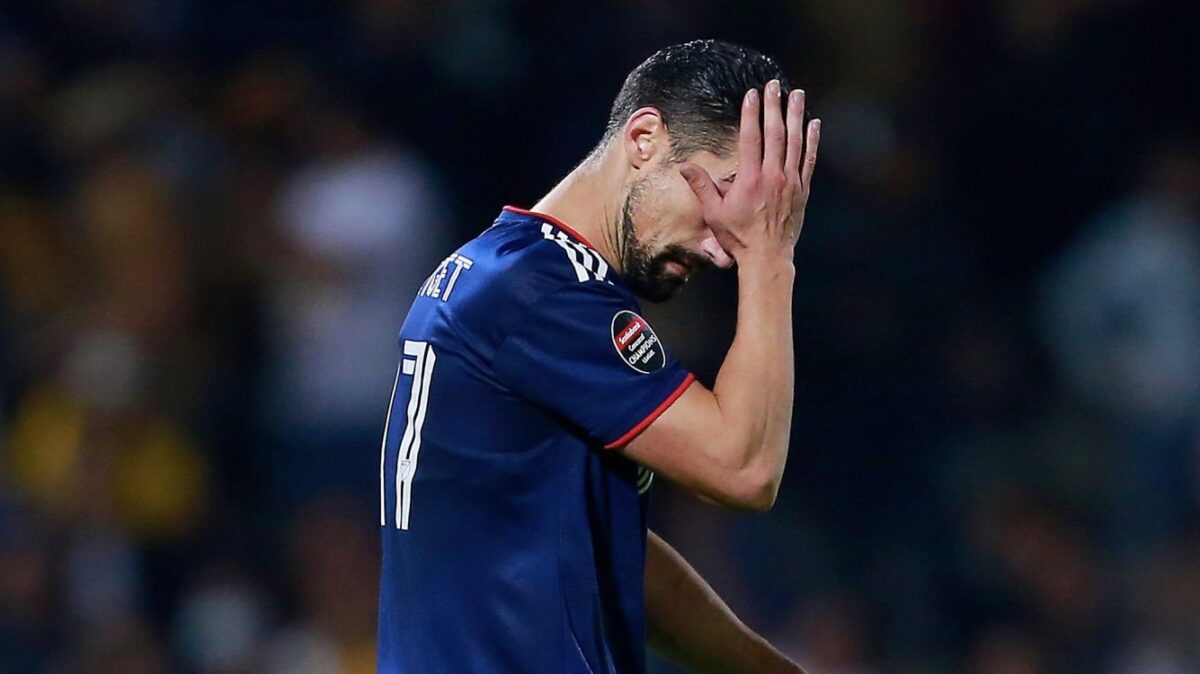 The New England Revolution went to Mexico with a 3-1 lead and a comfortable cushion in their Concacaf Champions League quarterfinal against UNAM Pumas, but that two-goal margin disappeared as Bruce Arena’s side became the latest in the long history of MLS teams to suffer a brutal CCL disappointment.

The New England Revolution suffered a second-leg defeat in Mexico on Wednesday, losing to Liga MX side Pumas UNAM in a penalty shootout, 7-6, after the clubs finished level at 3-3 after 180 combined minutes. Sebastian Lletget and Tommy McNamara both missed their spot kicks, before Juan Dinenno scored the clinching goal from the penalty spot.

Dinenno was Man of the Match for Pumas, scoring two goals in a 16-minute span between each half. The Argentina striker opened the scoring in the 33rd minute before adding to his tally in the 49th minute and putting added pressure on the Revolution.

Former Real Salt Lake winger Sebastian Saucedo drew Pumas level on aggregate after scoring his first goal of the competition. The veteran forward hit a right-footed shot into the center of Earl Edwards Jr’s goal, giving the home fans plenty to cheer about.

Omar Gonzalez and Dinenno each had last-gasp headers saved which forced the teams to head into a penalty shootout.

With the score tied at 2-2 in the shootout, Tommy McNamara’s effort was denied by Alfredo Talavera in the bottom-left corner. Edwards kept the Revolution alive with a save on Efrain Calvillo, but Lletget’s blasted his attempt over the bar and put Pumas in great position to advance.

Nicolas Freire and Dinenno each scored their spot kicks, propelling the Liga MX into the final four and eliminating the defending Supporters’ Shield winners from the competition.

Pumas joins NYCFC and Cruz Azul in the semifinals with one final spot up for grabs on Thursday.

CF Montreal fought to the end against Liga MX opponents Cruz Azul, but ultimately came up short in its quest for a semifinal round berth.

Carlos Antuna’s first-half goal proved to be the difference as Cruz Azul advanced on a 2-1 aggregate scoreline.

Both teams had ample opportunities to break the deadlock early in the first half, but Antuna extended Cruz Azul’s advantage just before halftime. Angel Romero’s cross was slotted home by Antuna, giving CF Montreal a steeper mountain to climb to stay in the competition.

Wilfried Nancy’s side picked up their pressure in the second half and cut the deficit to one as Rudy Camacho headed home in the 79th minute. Joaquin Torres’ cross was finished by the veteran defender, giving CF Montreal a lifeline late in the match.

Jose de Jesus Corona made a pair of big saves down the stretch on Romell Quioto to preserve the draw and ultimately advance Cruz Azul into the next round. Corona finished the match with five saves and Cruz Azul became the second of what could be three Mexican clubs in the final four.