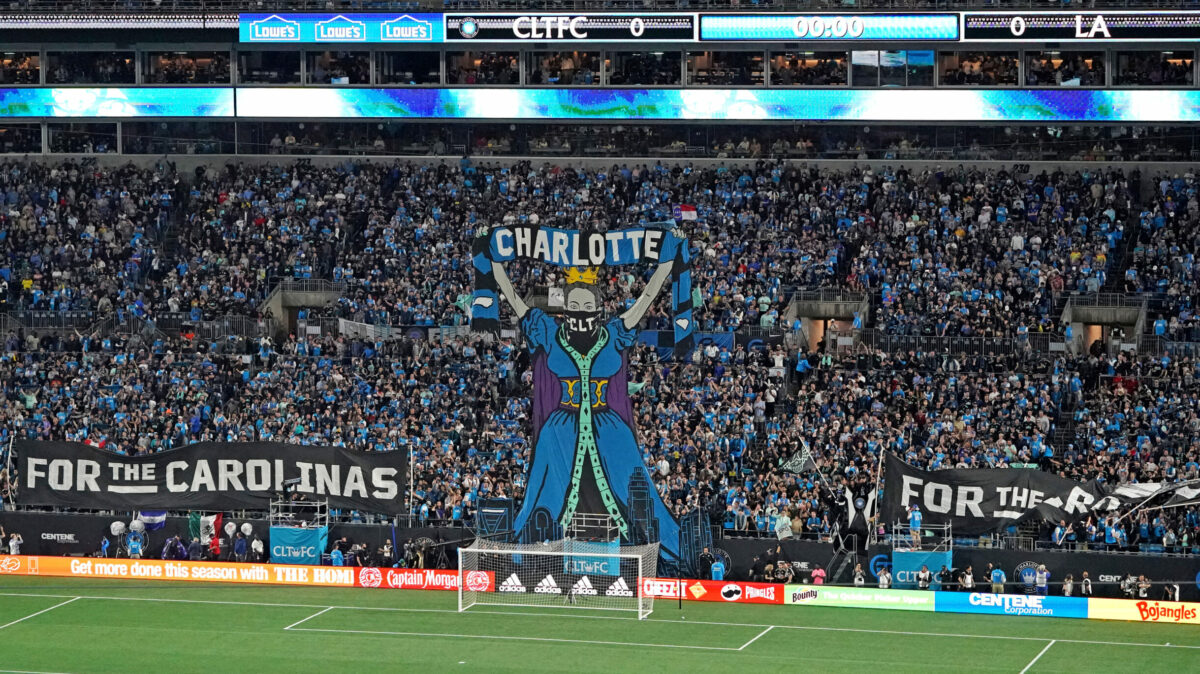 The first home game for an MLS franchise will always be a special moment, and Charlotte FC finally got to savor that feeling on Saturday night as the expansion side set a new MLS record for attendance for a single match.

Miguel Angel Ramirez’s side suffered a slim 1-0 home defeat to the LA Galaxy in front of 74,479 fans on Saturday night, which broke the MLS attendance record for a single match. Despite coming out on the losing end, Charlotte FC went toe-to-toe with the Galaxy for 70-plus minutes at Bank of America Stadium before Efrain Alvarez’s stellar finish stole all three points for the visitors.

It was just the start of what Charlotte FC hopes to achieve on a regular basis in MLS, packing its home stadium and bringing the noise against some of the league’s best.

“We play football because we want to win, but today I believe I’m the happiest coach in the world,” Ramirez said post match. “It was amazing. I cannot describe it with words, the energy. I’d like to thank everyone who joined us in this party because it really was a party. If we won, we’d continue to party. But we cannot party.”

“That was the best game I’ve been a part of my entire life,” Charlotte FC right back Jaylin Lindsey, a Charlotte native, said. “Before I walked off the pitch, I sat at midfield trying to soak it all in. Picturing myself seven to eight years ago in the nosebleeds watching [Carolina] Panthers games and countless ICC [International Champions Cup] games. Now, I’m that person on the field. It was unbelievable. It was one of the best nights of my life, to be honest with you.”

Charlotte FC certainly played with an added boost of energy Saturday night, with hopes of claiming a first-ever MLS victory. Defensively, Charlotte FC did well to keep the Galaxy in check for most of the match until Alvarez’s screamer into the top-right corner silenced the home fans. Ramirez will be proud of the work rate and energy put in by his players in what was an emotional night in Charlotte, but ultimately the offensive chances went begging for the expansion side yet again.

Daniel Rios’ stoppage time header was the best opportunity for Charlotte FC, but Jonathan Bond easily denied the former Nashville SC forward. Charlotte FC finished with three shots on goal out of five in total, being outshot 21-5 in the full 90 minutes. The arrivals of youngsters Ben Bender and Chris Hegardt provided a slight spark off the bench, but ultimately the expansion team was shutout for the second match in a row.

“You saw their performance, Bender is a 2001 and Hegardt is a 2002, they are boys still playing against men,” Ramirez said. “They are playing professional football for the first time, and you saw their performance, they have the talent. Both Ben and Chris were aggressive going forward, they fed off the energy of the crowd. Of course, they are frustrated with the loss because they want to win … They are winners.

“I feel like myself and the players are more mature with every game,” Ramirez added. “Against D.C. United we were dying physically, technically, and tactically in those last 15 minutes. Today that didn’t happen, we were able to finish the game strong, fighting until the end to score. For me, this is a big step for us.”

Charlotte FC will have more chances to move its way up the table. A trip to Atlanta United is next for Ramirez and his squad before back-to-back home matches against the New England Revolution and FC Cincinnati, respectively.

Saturday’s atmosphere at Bank of America Stadium was one that Ramirez, his players, or the fanbase will never forget and luckily for them, they have 16 more opportunities this season to build off of that energy.

“Even though we didn’t win, we will continue the party,” Ramirez said. “My request is that I would like to see all of them [the fans] back.”