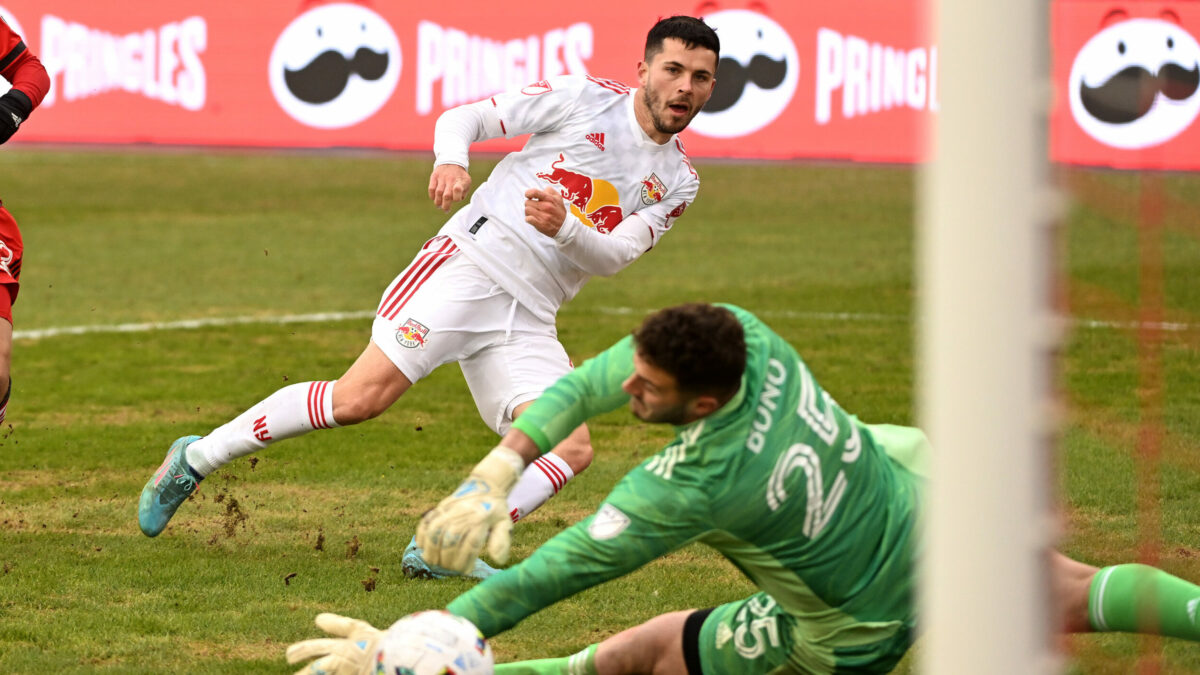 Scottish midfielder Lewis Morgan joined the New York Red Bulls this season looking to become the leading piece to a group of promising, but young players. Morgan took the first step towards that goal on Saturday by delivering a career day in a lopsided victory.

Morgan made an emphatic introduction to his new team Saturday, scoring his first MLS hat trick in a 4-1 win over Toronto FC at BMO Field. The win sends the Red Bulls atop the Eastern Conference table after two games, with six points and seven goals scored across two games.

“With Lewis Morgan, we have right now a player that has a big ability to score and we bring him today in the right spot,” Red Bulls coach Gerhard Struber said.

Struber praised Morgan’s immediate impact to the team, and called 23-year-old Polish striker Patryk Klimala “sharp like a knife.” Morgan lines up on the left side, but in Saturday’s game he often pushed inside and combined lethally with Klimala.

“Lewis sent me a big signal to play in the 10, maybe more like today,” Struber said. “I think the connection between Patryk and [Lewis], he comes always underneath. He was always ready and Patryk has…always a good eye on him and also he played him clean passes in areas that Lewis can handle this with his shooting ability in a very successful way. This makes in the end the big difference today.”

Klimala assisted all three of Morgan’s goals, which all came in the first half. The first two came with Morgan making a run into the middle of the field, with Klimala sending a well-placed pass from the right side. Morgan’s third goal showed off his speed and dribbling, as he took off past Toronto FC defenders and placed a shot into the bottom left corner.

Morgan played an important part to Inter Miami’s attack the past two years, but the club’s struggles all over the field limited his impact. The Red Bulls defeated Morgan and Inter Miami in three out of four matches, with losses of 4-0 and 4-1 sticking in Morgan’s mind.

“Red Bulls was always a hard team to play against,” Morgan said. “Obviously, they enjoyed too much success when we played them when I was at Miami. Getting the first taste of it last week in competitive action, I could see how many chances we create in transition.”

The Red Bulls have an exceptionally young squad this year, leading Struber to say in preseason that “we have to be realistic” with expectations. None of the team’s starters Saturday was 30 or older, and Struber started 19-year-old John Tolkin at left back. Teenagers Caden Clark, Daniel Edelman and Serge Ngoma stepped in as substitutes.

However, Morgan and Klimala are having little trouble leading the line early in 2022.

“The mentality has never been in question,” Morgan said. “It’s quite certain that you mentioned that when they scored, we were able to score again, that happened last week as well in San Jose, and these are away from home. So the team has great character and we are a young group. We’re all hungry to do well. In football, you have to start somewhere, experience comes from somewhere. I’m obviously one of the older heads in the team, but I know and trust every single team member I have.”

The Red Bulls next face Minnesota United in Harrison, New Jersey in Week 3.