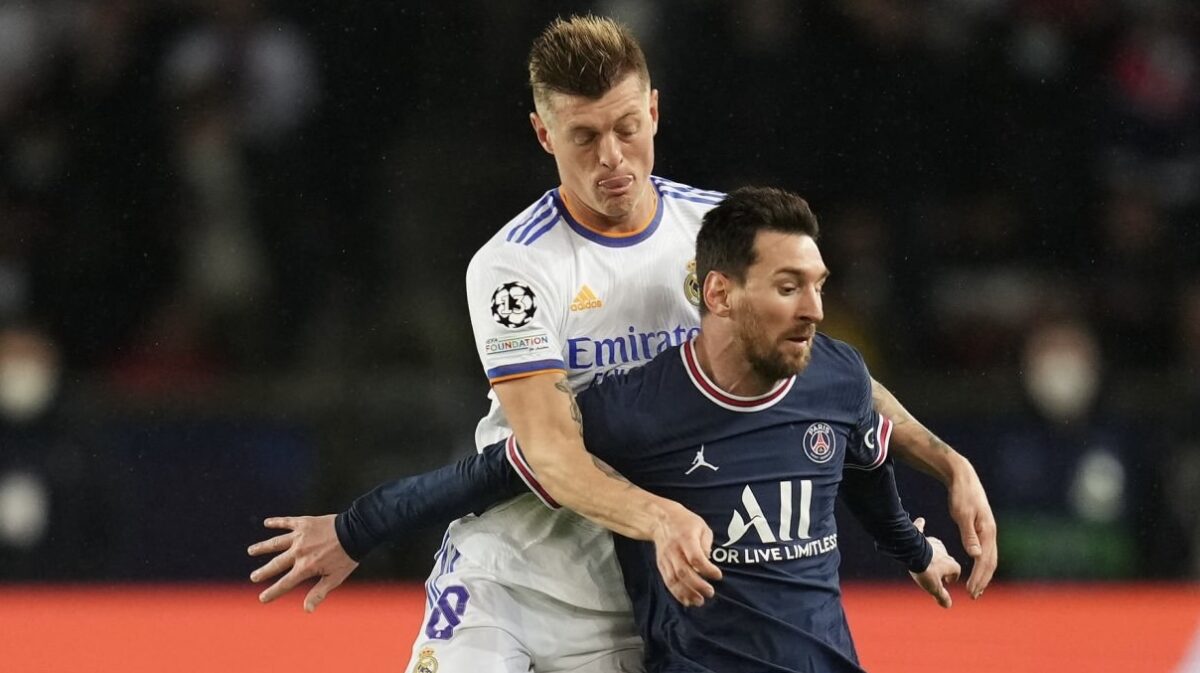 Four teams will clinch their spots into the UEFA Champions League quarterfinals this week as Round of 16 second legs begin on Tuesday.

Real Madrid welcomes Paris Saint-Germain to the Santiago Bernabeu on Wednesday looking to overturn a 1-0 first leg deficit. Los Blancos have won three matches in a row coming into the second leg while PSG has lost two of its last three matches overall. Lionel Messi and Karim Benzema will be the go-to attackers in this contest, which could be without Kylian Mbappe’s goalscoring abilities.

2020 winners Liverpool return to Anfield on Tuesday, holding a 2-0 aggregate lead over Serie A visitors Inter Milan. Jurgen Klopp’s side is clicking on all cylinders over recent weeks, winning its last 12 matches in all competitions, including the League Cup Final back on Feb. 27. Mohamed Salah has scored eight goals in the tournament and will try to add to that total this week. Inter Milan is unbeaten in three-straight matches and has the red-hot Lautaro Martinez to call on after his hat trick on Saturday.

Real Madrid is an unfamiiar situation coming into Wednesday’s second leg against Paris Saint-Germain, knowing it has to win for a chance to remain in the competition.

Los Blancos have won three matches in a row coming into this week’s second leg, recently thumping Real Sociedad 4-1 on Saturday. Karim Benzema has scored in all three of the recent victories for Real Madrid while Marco Asensio and Vinicius Junior have also gotten on the scoresheet. Pressure will be on Carlo Ancelotti’s side to advance, but in order to do so, Los Blancos will have to keep both Lionel Messi and Neymar in check.

PSG has lost two of its last three matches in all competitions, and is likely to be without star forward Kylian Mbappe through injury. Mbappe did not dress in PSG’s 1-0 loss to Nice over the weekend and would be replaced by Angel Di Maria if he is unable to play. Lionel Messi has not scored in each of his last five appearances for Mauricio Pochettino’s side, but has many fond memories of scoring against Los Blancos from his days at Barcelona.

Liverpool is flying high at the moment and although Inter Milan will give everything it can to stay in UCL play, the Reds will be favored to advance into the quarterfinals.

Jurgen Klopp’s Reds have won 12 matches in a row outscoring their opponents 28-4 over that span. A gritty 1-0 victory over West Ham United on Saturday kept Liverpool six points behind Premier League leaders Manchester City in the race for the league title, but the Champions League remains well in reach for the 2020 UCL winners. Sadio Mane and Mohamed Salah have totaled six goals between them in the last four matches for Liverpool and will be two of several thorns in Inter Milan’s side on Tuesday.

Inter Milan will come to Anfield with confidence after rolling past Salernitana 5-0 on Friday, but ultimately know Liverpool presents a tougher challenge. Lautaro Martinez scored a hat trick in the Serie A win this weekend while Edin Dzeko added two goals to continue the dominant 1-2 pair between the forwards. Both players will need to lay it all on the field on Merseyside of Inter Milan wants to pull off a major upset in England.

Red Bull Salzburg is running away with the Austrian Bundesliga title once again this season and will now look to claim the scalp of one of European’s finest clubs.

Matthias Jaissle’s side visits Bayern Munich on Tuesday, in what could be a historic night in club history. Red Bull Salzburg claimed a 1-1 first leg draw on home soil against Julian Nagelsmann’s squad and will play with no fear in Munich this week. The Austrian club is unbeaten in six-straight across all competitions, conceding only three goals in that span. U.S. men’s national team playmaker Brenden Aaronson and German international Karim Adeyemi spark the Red Bull Salzburg attack.

Bayern Munich dug deep to claim a draw in the first leg back in February, but will now be under heavy pressure to eliminate the European minnows from the competition. The Bundesliga leaders picked up victories since then against Greuther Furth and Eintracht Frankfurt respectively before tying Bayer Leverkusen 1-1 on Saturday. Robert Lewandowski has scored nine goals in the UCL this season, but could need help from Leroy Sane and Thomas Muller if Red Bull Salzburg sits back and defends heavily.

English Premier League leaders Manchester City holds a 5-0 aggregate lead coming into Wednesday’s second leg and will be eager to pile on the pressure once again this week.

Pep Guardiola’s side has won three matches in a row since a 3-2 loss to Tottenham in February, most recently thumping rivals Manchester United 4-1 on Sunday. Kevin De Bruyne and Riyad Mahrez both registered braces in the league victory, but could be rested with bigger obstacles on the horizon. Raheem Sterling and Gabriel Jesus are likely starters for the Citizens at the Etihad Stadium on Wednesday after being unused substitutes against the Red Devils on Sunday.

Sporting Lisbon has zero to lose coming into Wednesday’s second leg in Manchester knowing it needs a monumental comeback to advance. The Portuguese club has won two of its last four matches in all competitions, falling 2-1 to FC Porto in the Portuguese Cup before defeating Arouca 2-0 in league play on Saturday. Islam Slimani has scored three goals in his last three appearances for Ruben Amorim’s squad and will be pushing to start against a Man City side he is famiiar with from his time with Leicester City.