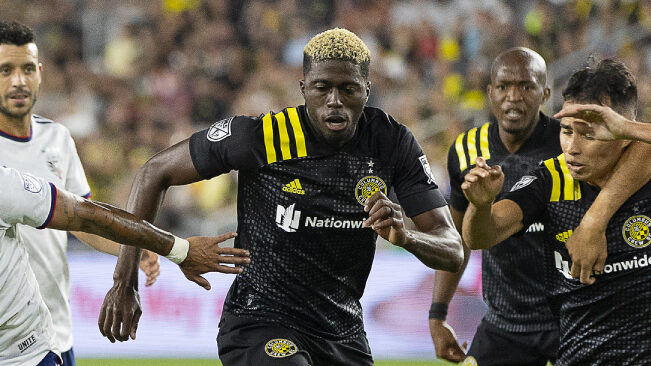 After more than four years in a Columbus Crew uniform, Gyasi Zardes’ career is set for a new chapter.

The Crew traded the 30-year-old striker to the Colorado Rapids, they announced Friday evening. Zardes had been the subject of trade talks by the Crew for weeks leading up to the move, and this move could allow Zardes to rekindle his MLS form ahead of crucial months competing for a U.S. men’s national team World Cup roster spot.

The Rapids will take on all of Zardes’ salary, and Zardes waived a no-trade clause to complete the move, ESPN reported. In exchange, the Crew will receive $300,000 in General Allocation Money, and more if incentives are met.

The Rapids now have an answer to questions about its own No. 9 spot. The Rapids have gone winless in their last four matches, and have gone four matches since a multi-goal game. However, Diego Rubio has scored four goals in his last six appearances. Robin Fraser has deployed one striker in his 3-4-2-1 formation up until now, but Zardes could either replace Rubio or start alongside him.

As for the Crew, coach Caleb Porter has chosen Miguel Berry over Zardes the past few weeks, but hasn’t seen much production from either player. Berry hasn’t scored since the opening match of the season, and Zardes had not scored for the Crew since the second match of 2022.

Zardes’ departure opens up a DP spot, which the Crew may look to fill this summer.

It turns out that Zardes scored his last goal in a Crew uniform on Tuesday, in the Crew’s 2-1 loss to Detroit City FC in the U.S. Open Cup. Zardes finishes this stint with the Crew with 122 appearances and 61 goals in all competitions. He helped Porter and the Crew capture the 2020 MLS Cup title with a 3-0 win over the Seattle Sounders. He was the Crew’s top MLS scorer each year from 2018 to 2020.

This trade comes with some interesting implications for the future of the Zardes’ USMNT career. Zardes has been a favored by USMNT and former Crew coach Gregg Berhalter over the previous World Cup Qualifying run. However, he was maligned by fans for his persistence in the team despite poor performances like the one he put forth in a 2-0 qualifying loss to Canada.

However, Zardes impressed with the USMNT’s B squad at the 2021 Gold Cup. He scored two goals and added an assist as the team won the competition.

A change of scenery sets the table for Zardes to get a fresh start and to fight for a USMNT roster spot in the 2022 World Cup. Zardes has scored 14 goals for the USMNT in 68 caps.

The No. 9 position is still wide open, with Jordan Pefok usually out of Berhalter’s plans and unable to replicate club form on the international stage, Daryl Dike injured at West Brom and Ricardo Pepi on a scoring drought since joining FC Augsburg in the German Bundesliga. Even Josh Sargent, who has put in a few strong performances with Norwich despite an awful standing in the Premier League table, hasn’t made a clear statement to catch Berhalter’s attention.