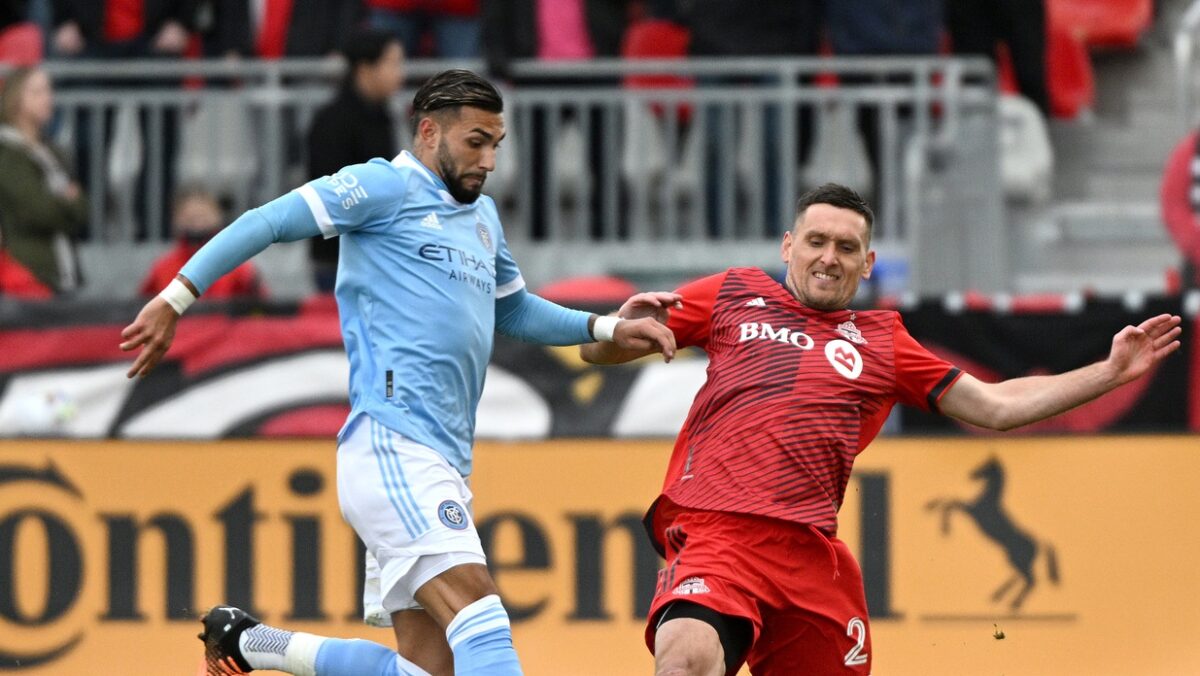 A week of surprising U.S. Open Cup matches makes way for another weekend of MLS matches. Week 8 in MLS brings a clash between one of the hottest Eastern Conference teams in Toronto FC and the reigning MLS Cup champions, New York City FC.

Among the other matches in store is the Philadelphia Union taking on CF Montreal. CF Montreal is on a three-game winning streak led by Djordje Mihailovic. The Union are still top of the Eastern Conference, but Orlando City could change that with a home result against the New York Red Bulls.

Here is a look ahead at the top MLS matchups in Week 8.

For Week 8, New York City will remain home at Yankee Stadium, the site of a 6-0 rout of Real Salt Lake last weekend. This matchup could be the best of the week, as Toronto FC enters coming off a win over the previously undefeated Philadelphia Union and NYCFC looks to put early-season struggles in the league and continental play in the rearview mirror.

Valentin Castellanos will come into this match brimming with confidence after scoring four goals in the last game. Toronto FC can counter that with another in-form striker in Jesus Jimenez, with four goals this season. Jimenez has combined well with midfielders Jonathan Osorio and Alejandro Pozuelo, who scored against the Union last week.

NYCFC’s midfield trio of Talles Magno, Sebastian Rodriguez and Thiago Andrade are starting to combine smoothly. It bears watching whether NYCFC can keep the attacking momentum going against a tougher opponent at Yankee Stadium.

Nashville SC’s reputation as the toughest team in 2022 will get put to the test in the eighth straight road match of the season, before the club’s new stadium GEODIS Park opens. This might be the most difficult clash yet.

Both teams are unbeaten in the previous three matches. Greg Vanney’s Galaxy squad is firing on all cylinders, offensively and defensively. The Galaxy scored five goals in the past three games and allowed only two.

Watch the matchup between Javier “Chicharito” Hernandez vs. Walker Zimmerman and the rest of Nashville’s three-man back line. Alex Muyl and Daniel Lovitz will have their hands full dealing with the Galaxy’s wing threats in Douglas Costa and Samuel Grandsir.

This could be one of the best Texas Derby matchups in recent memory. Both clubs enter this match with identical records of 3-1-3 and lethal attacking options such as FC Dallas’ Jesus Ferreira and the Dynamo’s Darwin Quintero.

This match should bring an interesting clash of styles between Dallas coach Nico Estevez and Dynamo coach Paulo Nagamura. FC Dallas often plays narrowly, with central midfielders Paxton Pomykal and Brandon Servania winning the ball and distributing to Ferreira or an inverted winger in Alan Velasco. The Dynamo, on the other hand, have key threats on the wings such as Quintero and Fafa Picault.

The New York Red Bulls have a tough road trip ahead, as the club tries to muster some attacking form. The Red Bulls have scored only once in the past three games, while Orlando City rides a run of three wins in their past five matches.

Orlando City posted shutouts against the Fire and Crew in their last two matches, despite missing starting centerback Antonio Carlos, who remains out because of a torn muscle. Ercan Kara scored in both matches.

The Red Bulls will hope Luquinhas and Ashely Fletcher are ready to contribute. Both new arrivals seem up to speed after getting over injuries that limited their playing time to start 2022.

Minnesota United finally found a way to score goals in last week’s 3-1 win over the Rapids. The Fire, however, have gone three matches winless and scored only one goal in the process. Nevertheless, this will be a clash between two defensively strong clubs with dueling playmakers in the Loons’ Emanuel Reynoso and the Fire’s Gaston Gimenez.