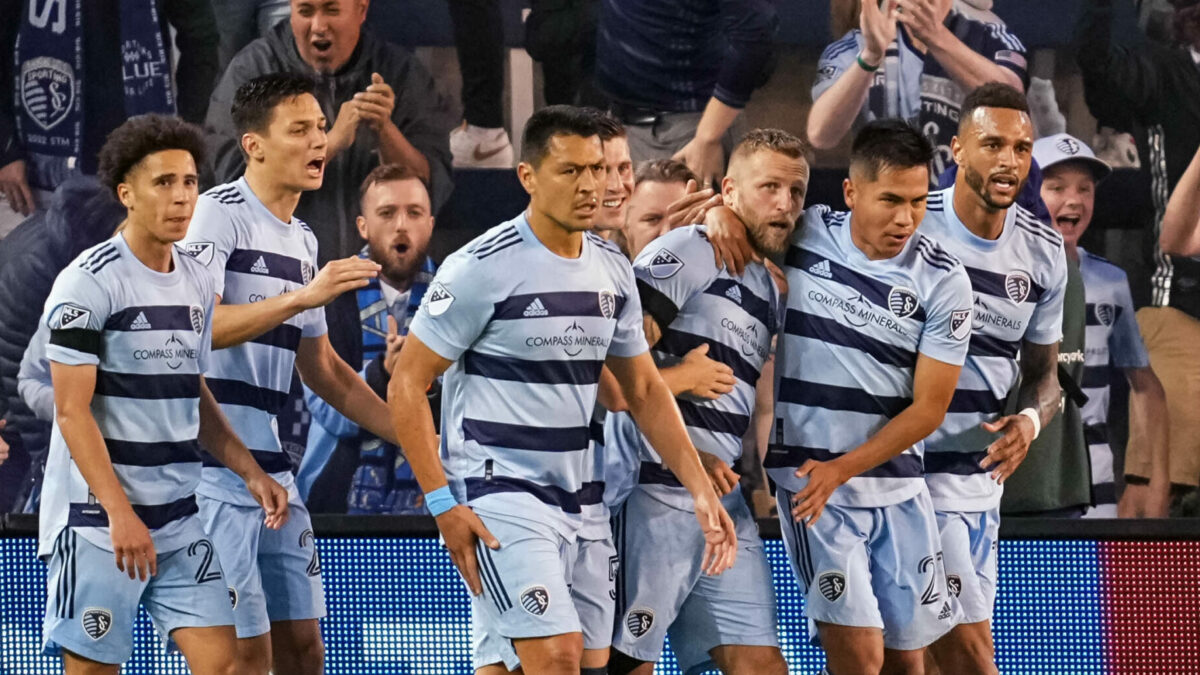 Sporting Kansas City’s start to the 2022 Major League Soccer campaign went worse than anyone could have imagined before the season began. A nine-game winless run showed many things that Peter Vermes’ squad lacks this year: a midfield playmaker, a reliable centerback partnership and a productive front three.

However, SKC’s most recent results are providing some cause for hope. Sporting KC returned home a week ago to beat the Colorado Rapids. Daniel Salloi scored two goals, and the Rapids proved they were no pushover by shocking LAFC in a 1-0 just a few days before.

Sunday’s 1-1 draw in San Jose further showed Vermes’ group can grind out some results. Johnny Russell scored to finish off an encouraging play along the sidelines from Cameron Duke, who has showed his versatility in playing three different positions already in 2022.

Wednesday night’s U.S. Open Cup Round of 16 win over the Houston Dynamo served as the latest evidence that SKC might be turning things around, with Johnny Russell’s two goals completing a comeback and making it a three-match unbeaten run in all competitions.

Do these results instill some hope that Sporting KC can fully turn things around for the rest of the season? Can a lineup broken down by massive early-season injury losses put it all back together?

The memory of a 7-2 drubbing in Portland just two weeks ago still sticks, even with three unbeaten games under Sporting KC’s belt since then. The point in San Jose showed Vermes’ ability to choose a lineup that fights well on the road, but Sporting KC still ceded 63% of possession and only took two shots on goal. Even worse, the Quakes equalized in the very first minute of the second half, showing a lapse in readiness by Sporting KC’s back line.

The win over Colorado came to an ugly end, with Daniel Salloi sent off for hacking Lucas Esteves’ ankle, and centerback Andreu Fontas gripping Diego Rubio’s neck with both hands and also being red-carded. That left Sporting KC shorthanded for the Quakes match, and forced Vermes to choose a less-than-ideal lineup, with 21-year-old Duke, normally a right back or central midfielder, at left winger.

The acrimonious finish, plus the fact Sporting KC only managed six shots and 39% of possession, continues to raise doubts about the club’s outlook for the 2022 season. The club has been one of the most consistent teams in MLS for years, and it’s still early, but issues persist with the lineup each game, and so many questions are left with unsatisfying answers.

Injuries heavily limited Sporting KC’s upside before the season even started. Alan Pulido was ruled out for the year after requiring knee surgery. The Pulido loss was a major blow, but Pulido has missed plenty of games injured in past years.

Another major injury blow came a few weeks into the season. Israeli attacking midfielder Gadi Kinda, a Designated Player who had five goals and eight assists in 2021, started the season injured, but figured to be ready in a matter of weeks. On April 29, the club announced Kinda required surgery and would miss the entire season.

Things only got worse in the first game of the season, a 3-1 loss at Atlanta United. Jose Mauri, who was supposed to be the club’s next linchpin at defensive midfielder, showed a complete lack of effort in defending in transition. The next day, Mauri’s contract was terminated, and Vermes did not go into specifics in explaining the dismissal.

All of that set the table for a disastrous start to 2022, with three losses in the first four games.

Some of these issues could have been foreseen in 2021. The team never quite found a way to switch gears after losing Gianluca Busio, who orchestrated the midfield. Busio, 19, was sold to Venezia in midseason for a reported $6.6 million fee. Sporting KC lost the last three games of the season, squandering a chance to win the Western Conference.

The loss of a true No. 6 in the midfield is glaring. That’s been a hallmark of Vermes’ tactics for a long time, from Paulo Nagamura to Soni Mustivar to Ilie Sanchez and plenty of standout players in between them. The club chose to part ways with the 32-year-old Sanchez, and brought in Uri Rosell for his second stint with the club.

Sporting KC averages 51.6% of possession through 12 games, which is about on par for the past few seasons. Vermes’ tactics have typically put a premium on possession and pressing in the midfield.

French midfielder Remi Walter is one of few bright spots for Sporting KC this year. Walter is typically suited to a No. 8 role, but he’s serving as a No. 10 in the absence of Kinda and doing a fine job. Walter completes 89% of his passes, averages one aerial duel won per game and is ever-present — he’s the only field player to have played every minute of the season.

Another bright spot is winger Marinos Tzionis. Tzionis, a 20-year-old Cypriot signed over the offseason, has been a revelation because of his dribbling ability and runs. Logan Ndenbe, a Belgian left back, is another strong newcomer who has locked down his starting spot. An emergency new signing at center forward, Nikola Vujnovic, has shown flashes in limited action, but he also left the Rapids win with an injury.

Khiry Shelton filled a key backup striker role in 2021, but now Shelton is being asked to carry the starting role in Pulido’s absence. Shelton doesn’t come close to fitting Pulido’s mold as a No. 9 who is comfortable dropping into midfield and making plays, and that is showing.

The 7-2 loss to the Timbers from last weekend is the first game in which Shelton has taken more than two shots. He has yet to score an MLS goal this season, and Sporting KC’s attack seems disconnected, lacking a playmaker in attacking midfield and a center striker to either score or facilitate in the final third.

Stats show Sporting KC’s difficulty in the final third, with 76% of the team’s touches coming on the left or right wing. However, 60% of shots come from the middle of the field and Sporting KC is fourth from last in shots per game in the penalty area with 5.5.

Johnny Russell, still Sporting KC’s engine on the right wing, has three goals this season. He picked up steam at the end of the 2021 season, setting a club record scoring streak. Russell hasn’t lost his 1v1 ability or speed, but the lack of playmakers in Pulido or Kinda to feed him is clear to see.

It’s far too early to declare this season a failure, or to think Sporting KC’s results won’t turn around at least a little bit at some point. However, with two DPs down, an aging central midfield with little depth and lacking production up top, it’s easy to see how Sporting KC could find itself decidedly out of the playoff picture by September.

In that event, it might be prudent for Vermes to develop the club’s younger players. Right back Graham Zusi has played in 10 games, but will likely need to be rotated out at points of the season to come. Kayden Pierre, an academy graduate, was promoted to the first team to begin the season and could use the experience at right back. Duke, who played regularly at center mid last season, has filled in at right back and could play at either spot.

Centerback Robert Voloder hasn’t always performed exceptionally in four starts, but the 21-year-old wasn’t supposed to be a first-choice option at the position until injuries pushed him toward the top of the list. Homegrown players such as Jake Davis, Ozzie Cisneros and Felipe Hernandez are almost sure to see playing time with Sporting KC’s lack of depth. How much they play and develop with first-team minutes may just depend on Sporting KC’s outlook as the season progresses.

Far more questions than answers remain for Sporting as the 2022 season continues. The early season injury blows leave Vermes and the coaching staff no flexibility to make a move in the summer transfer window. Vermes has started to turn results around, but the grind of a long season combined with limited resources to revamp the roster and provide cover for the long-term injuries will make a complete turnaround a difficult task.

If the current mini-streak fades, and the losses start to return, Vermes will eventually have to think about focusing more on giving playing time to his young players. That being said, Vermes isn’t likely to raise the white flag on the season any time soon, especially with the team’s recent resurgence.