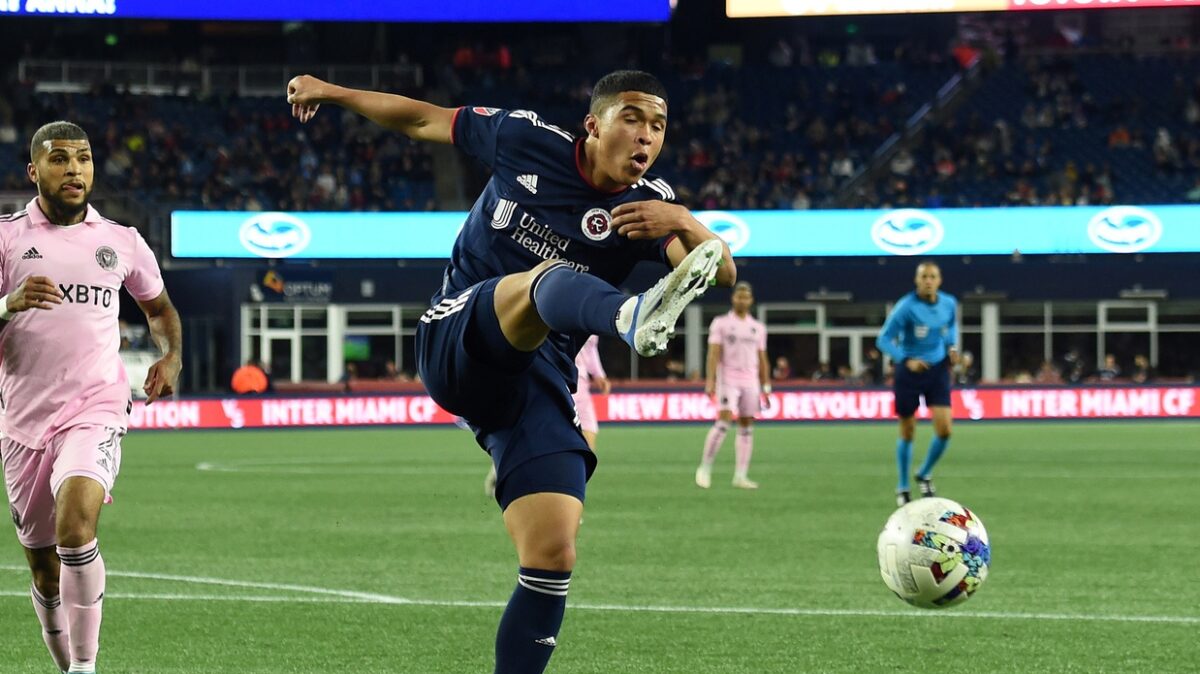 Anyone wondering how Damian Rivera would respond to his first start in Major League Soccer didn’t have to wait long to find out the teenager would be just fine.

The New England Revolution homegrown player scored in the first minute of Saturday’s 2-0 win over Inter Miami, delivering an impressive shift to help the Revs return to their winning ways.

Rivera wasn’t the only MLS youngster to impressive last weekend. Alan Velasco continues to show why FC Dallas paid a $7 million transfer fee for his services, and Jayden Nelson had his latest outstanding outing for Toronto FC, albeit in defeat.

LAFC’s Mamadou Fall was a key cog in defense for the Black and Gold’s 2-0 win over Minnesota United on Sunday night to round out the weekend of games, while the New York City FC tandem of Talles Magno and Gabriel Pereira combined to help the reigning MLS Cup champions roll to a comfortable victory over the San Jose Earthquakes.

Here is a closer look at the youngsters (Players born in 2001 or later) who enjoyed the best performances in MLS Week 9:

The aforementioned Nelson has played most of this season as an out-and-out winger for TFC, but in the 2-1 loss to FC Cincinnati, Nelson accompanied Jonathan Osorio in the midfield and showed his attacking prowess from the center of the pitch. Operating in a 3-4-2-1 formation, Nelson facilitated possession well as the third attacker alongside Alejandro Pozuelo and Jesus Jimenez while also showcasing an awareness to drop back in midfield to provide defensive support when needed.

From a statistical perspective, the 19-year-old playmaker completed eight dribbles, 93 percent of his passes, and almost scored the opening goal of the match with a long-range effort that was saved by Roman Celentano before being subbed out in the 67th minute.

One of the bigger South American talents to join MLS in the winter, Velasco added his second goal of the season over the weekend for FC Dallas in their 2-2 draw versus Sporting KC.

Down 1-0 in the 36th minute, Velasco whipped in a sensational free-kick from a tight angle outside of the penalty area leaving Tim Melia flapping at the air and tying the scoreline at 1-1. The goal highlights a strong individual performance from Velasco where he was able to put pressure on the SKC backline throughout the match, but Daniel Salloi’s late equalizer helped Sporting salvage a point.

Fall, 19 continues to be a massive part of a retooled LAFC team that sits atop the Western Conference on 22 points.

Starting alongside Jesus Murillo in the center of the defense, Fall won three aerial duels and four clearances in Sunday night’s 2-0 shutout over Minnesota United. The Loons attack was stifled on the night and Emmanuel Reynoso was held without a shot for the duration of the match.

Playing alongside Adam Buksa as a second striker, Rivera showed no signs of nerves in his first MLS start, giving the Revs an early 1-0 lead less than a minute into the match. Miami played a loose pass out of the back that was turned over in the midfield and Carles Gil slipped it to Rivera inside the box 19-year-old laced it into the back of the net.

The strike by Rivera is his first in MLS and with three appearances in the last four matches, the Rhode Island-born striker is making a case for more minutes even when the Revs attack is back to full strength.

If Sunday’s 3-0 win over the San Jose Earthquakes is any indication, NYCFC seems to have found something in their young Brazillian talents.

Magno, 19 arrived in MLS last season and endured an inconsistent first season in the Big Apple but year two has been a considerable jump up for the Brazillian youth international who has one goal and four assists through eight games this season.

Against the Earthquakes, Magno nearly had his second goal of the season on a header that hit the goal post, but did earn his fourth assist of the campaign with a clever slip pass to Keaton Parks to give NYCFC a 1-0 lead in the 74th minute.

As for Pereira, the 20-year-old attacker has been limited to four substitute appearances since joining the reigning MLS Cup Winners from Corinthians in March as a U22 initiative signing, but he added his second goal of the season to make it 2-0 in the 78th minute. Magno started the movement for NYCFC, but it was Santi Rodriguez who found Pereira on the right side of the penalty area and the Brazilian winger wasted no time hooking a left-footed shot in the back of the net.