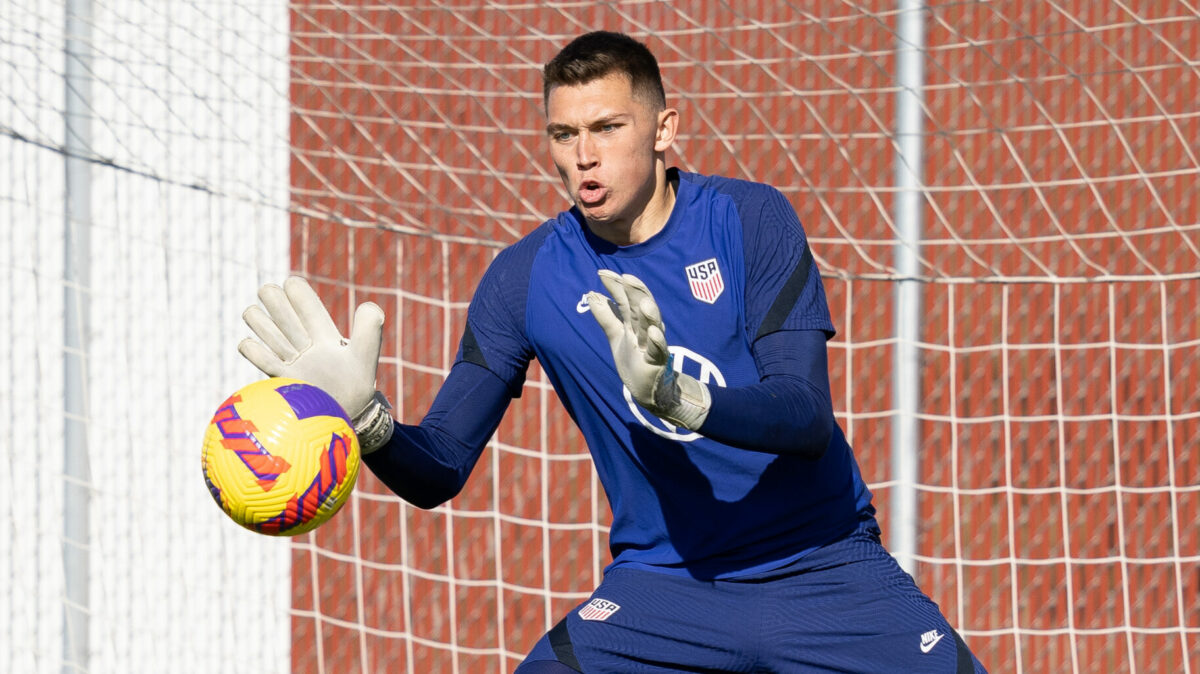 The Polish men’s national team’s interest in American teenage goalkeeper sensation Gabriel Slonina has officially gone from initial inquiry to full-fledged pursuit, and the 18-year-old Chicago Fire standout will have a decision to make about his summer plans.

Poland has called up Slonina to be part of its squad for upcoming UEFA Nations League matches in June, against Belgium, Wales and Netherlands. Matches that will take place at a time when the U.S. men’s national team will also be participating in Concacaf Nations League.

Slonina has been part of multiple USMNT squads over the past year, but has yet to make his national team debut, and is not cap-tied. Being part of the Nations League squad for either the United States or Poland would not cap-tie him, and given his young age, playing for either country wouldn’t automatically cap-tie him either.

Poland’s interest in the highly-regarded goalkeeper prospect is nothing new, with Poland manager Czeslaw Michniewicz having recently visited Slonina in April to express interested in bringing him into the fold.

Slonina is the best young goalkeeper in the USMNT pipeline, and is enjoying a solid season in goal with the Chicago Fire despite the team’s disappointing results. The teenager is in his first full campaign as a club starter after breaking into the Fire lineup during the 2021 season at the age of 17.

Joining Poland for the Nations League would not require a one-time switch, and simply being on Poland’s roster for those matches would not cap-tie him. Coincidentally, it was just one year ago when goalkeeper David Ochoa was part of the USMNT squad for the Concacaf Nations League final only to later switch his national team allegiance to Mexico.

Berhalter currently has Zack Steffen and Matt Turner as his top two goalkeepers in the USMNT setup, but with both facing the prospect of not playing regularly heading into the FIFA World Cup later this year, Slonina has suddenly emerged as a potential darkhorse candidate for playing time despite his young age and relative inexperience.

Even if being a factor for the upcoming World Cup is a long shot for Slonina at his age, there is no denying his value as an elite prospect, and losing him to Poland would be a big blow for a USMNT setup that isn’t overflowing with top young goalkeeper prospects.

Poland has a good collection of goalkeepers, with four of them joining Slonina on the Nations League list, including Juventus starter Wojciech Szczesny and fellow Serie A goalkeepers Bartlomiej Dragowski (Fiorentina) and Lukasz Skorupski (Bologna), but Slonina is a top-level prospect drawing transfer links to European giants so securing his services would be a coup.

The good news for the USMNT is that FIFA rules governing national team eligibility for young players has changed over the years, with safeguards being instituted to keep national teams from cap-tying young players with caps at young ages. As an 18-year-old, Slonina will be able to play for Poland in multiple matches if he chooses to and not be cap-tied, much the same way Yunus Musah was not initially cap-tied to the USMNT after his first handful of national team appearances.

Both the USMNT and Poland will be competing in the World Cup in November, and a World Cup roster spot could be the enticement that ultimately seals his commitment, though Slonina has been clear about not wanting to rush into any decisions about his national team future.