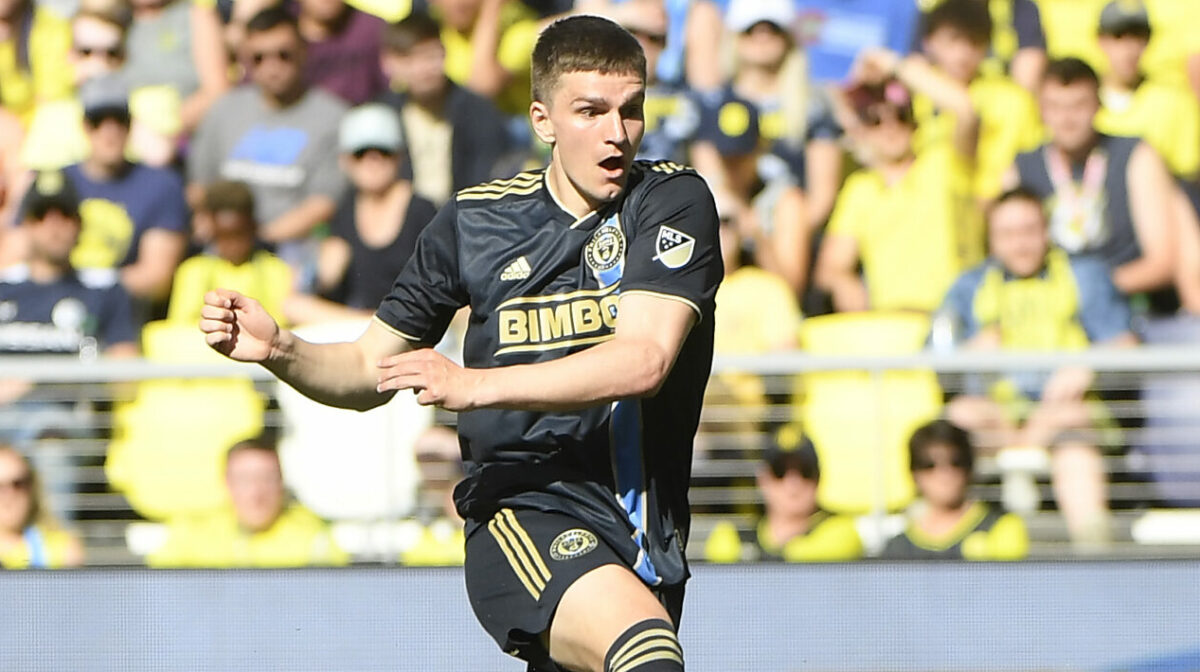 NASHVILLE — Mikael Uhre has been eager to deliver goals for the Philadelphia Union following his move from Danish club Brondby earlier this year. After showing flashes of his talent over the last few weeks, the Designated Player finally got to celebrate his first MLS goal on Sunday.

Uhre helped the Union leave GEODIS Park with one point in a 1-1 draw Sunday against Nashville SC, scoring his first goal for the club. The Danish international battled for 75 minutes against veteran defenders Walker Zimmerman and Dave Romney, eventually getting the better of Zimmerman on the opening goal of the match.

Uhre has been doing the little things in the top of the Union’s 4-4-2 formation over recent weeks, but will now gain confidence going forward after finding the back of the net for the first time. Uhre had gone more than 300 minutes in a Union shirt before scoring his first goal.

“I am very happy for him to score,” Union goalkeeper Andre Blake said about Uhre’s goal. “We see it everyday in training, he’s a good person and a good player. We hope it’s the first goal of many to come because we added him to bring goals to the team, but overall just happy for him to celebrate it in a game like today’s.”

“He’s given us something we haven’t had before,” Union head coach Jim Curtin said about Uhre’s presence in the squad. “A perfect ball from Daniel and Mikael separated nicely. It was a great goal and a great team effort. He worked hard defensively too and even could’ve had a goal earlier than that in the match. I think the floodgates will open for him now.”

Uhre arrived in MLS following a sensational career with Brondby, scoring 48 goals in 123 career appearances for the club. The 27-year-old remained in Curtin’s starting lineup on Sunday, registering three shots on goal, winning five of his nine duels, and completing three dribbles. Most importantly, he delivered for the Union on the best attacking sequence of the match.

Daniel Gazdag’s chipped pass over the Nashville SC backline allowed Uhre to race behind Zimmerman and get into the box. Uhre cut onto his right foot and slotted home past Joe Willis into the bottom-right corner to break the deadlock in the second-half. It was a confident run and finish from Uhre, who became the seventh Danish player all-time to score an MLS goal.

“As a player you want to play against the best and today was one of those moments,” Uhre said about his battles with Zimmerman. “We had a lot of tough battles, he is a great defender, and I was happy to get by him on the goal. I think battles like that will only make me a better player.”

“That is as tough of a matchup that Mikael will see all season,” Curtin said about the Uhre/Zimmerman battle. “Walker is a guy who is the best American centerback in MLS and won’t give an inch. Mikael showed his speed on plays today and made the most of his best chance towards goal.”

Uhre went almost one month in between appearances for the Union, but since April 9, has remained in the Eastern Conference club’s starting lineup. He registered his first MLS assist against Toronto FC on April 16 and now has first goal in what Curtin and the rest of Uhre’s teammates will hope is a long and successful career in Chester, Pennsylvania.

Although the Union did not walk away with a full three points, they battled back and remained top of the Eastern Conference on 18 points. Uhre’s strong day is a positive sign for the Union as they continue a busy seven-match May schedule with trips to LAFC (MLS) and Orlando City (U.S. Open Cup) over the next nine days.