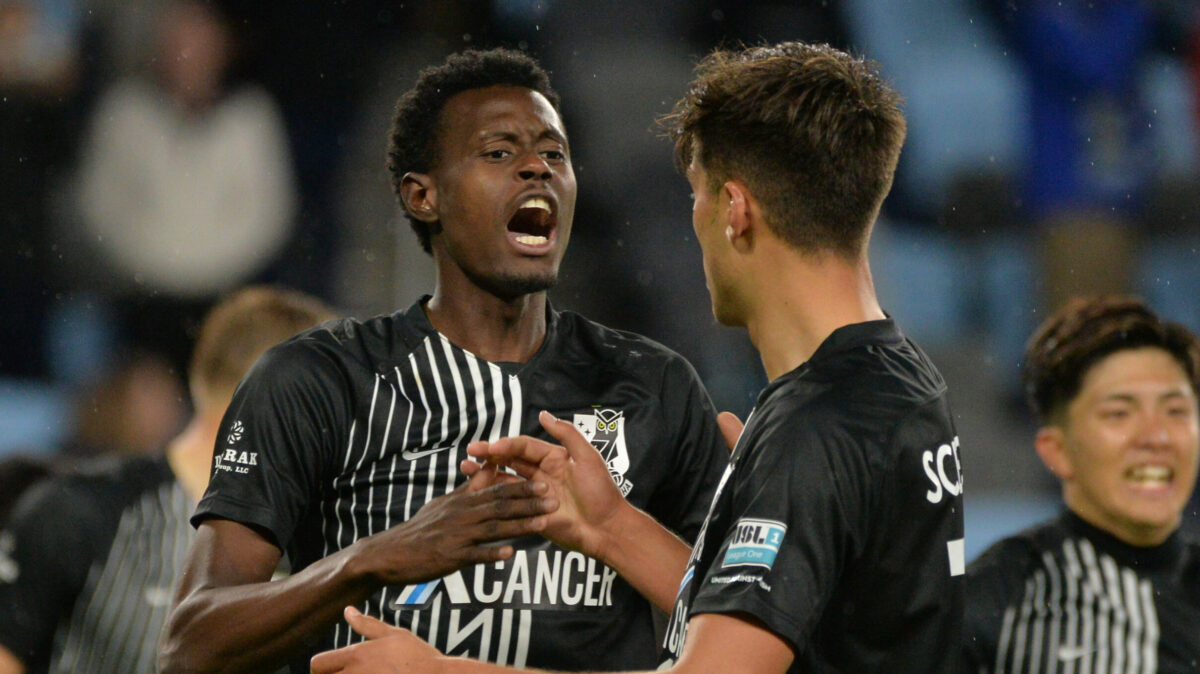 Union Omaha’s incredible U.S. Open Cup run continued in the Open Cup Round of 16 Wednesday night. Omaha came back over Minnesota United to become the first USL League One team to progress to the tournament’s quarterfinal.

In other top Cup matches, New York City FC got the best of the New England Revolution in another knockout tie and the Galaxy earned a dominant win over LAFC, in which Javier “Chicharito” Hernandez broke his scoring drought.

Omaha isn’t the only non-MLS team left, either. Sacramento Republic FC took down the San Jose Earthquakes with two unanswered goals to cap another exciting Open Cup round.

Sporting Kansas City will be next in line for Union Omaha. Sporting KC beat the Houston Dynamo at home, thanks to two goals from Johnny Russell. The Red Bulls eased past Charlotte FC at Red Bull Arena, with a go-ahead goal by Dylan Nealis early in the second half. The Red Bulls will meet NYCFC in one of the most highly anticipated matches of the quarterfinals.

Here are the highlights from the U.S. Open Cup Round of 16.

Union Omaha weathered an early Loons goal to win again on the road and advance to the quarterfinal. It’s the second win over an MLS club in this year’s Open Cup for the USL League One team.

Omaha’s Joseph Brito finished with a volley at the back post, after a botched header from Michael Boxall.

Hugo Kametani leveled the match right before halftime for Omaha, to cancel out Hunou’s goal in the sixth minute. Minnesota United dominated possession with 73% of the ball, and piled on pressure late. Luis Amarilla and Oneil Fisher had key chances late in the match to equalize, but the Loons could not find an answer.

Santiago Rodriguez scored to send NYCFC into the next round over the Revs, extending his team’s unbeaten run in all competitions to 10 games.

The 22-year-old Uruguayan winger scored by sneaking past two defenders after receiving a pass in the 18-yard box from Heber. The goal was all NYCFC needed to send the Revs packing from the U.S. Open Cup. The match was a rematch of the Eastern Conference Semifinal of 2021, in which the eventual MLS Cup champions NYCFC defeated the Revs in penalties.

NYCFC maintained control of the game, with 15 shot attempts and seven shots on goal. The Revs, which played a heavily rotated lineup, managed only 36% of possession and four shots on goal.

NYCFC’s win sets up an all-New York matchup with the Red Bulls in the quarterfinal. The Red Bulls, buoyed by depth and strong performances from young players, have appeared to be one of the top teams still alive in the Open Cup.

Javier “Chicharito” scored his first goal in a month and a half, Kevin Cabral opened scoring and the LA Galaxy earned a dominant win over their crosstown rivals for the second time this season.

Hernandez finished off a fast counterattack from the Galaxy in the 57th minute. Samuel Grandsir launched a cross in Hernandez’ vicinity, in which he knocked into the opposite lower corner of the goal.

Grandsir assisted the Galaxy’s first goal, too, sending in an inch-perfect cross that Kevin Cabral had no trouble turning into the net. Dejan Joveljic finished off an excellent passing sequence for the Galaxy in the 81st minute, redirecting a low cross from Raheem Edwards to put the game out of reach.

It was a nightmarish night for LAFC, because Carlos Vela left the match in the 20th minute with an injury to his left quad. Diego Palacios also had to leave the game in the first half with an injury.

The Quakes’ fortune in MLS is starting to turn around, but Sacramento Republic brought that trend to a screeching halt in Open Cup play.

Luis Felipe scored with a header and an assist from Rodrigo Lopez in the 28th minute to seize control of the game. Lopez sealed the win with a long-range strike in the 82nd minute.

Quakes interim coach Alex Covelo made many changes to the starting lineup that earned a draw at home against Sporting KC this past Sunday. Only Judson, Oskar Agren and Oesseni Bouda remained from the previous game’s lineup. The Quakes put plenty of pressure on the home team, with 17 shots and 70% of possession.

Sacramento will move on to face the LA Galaxy in the quarterfinal.