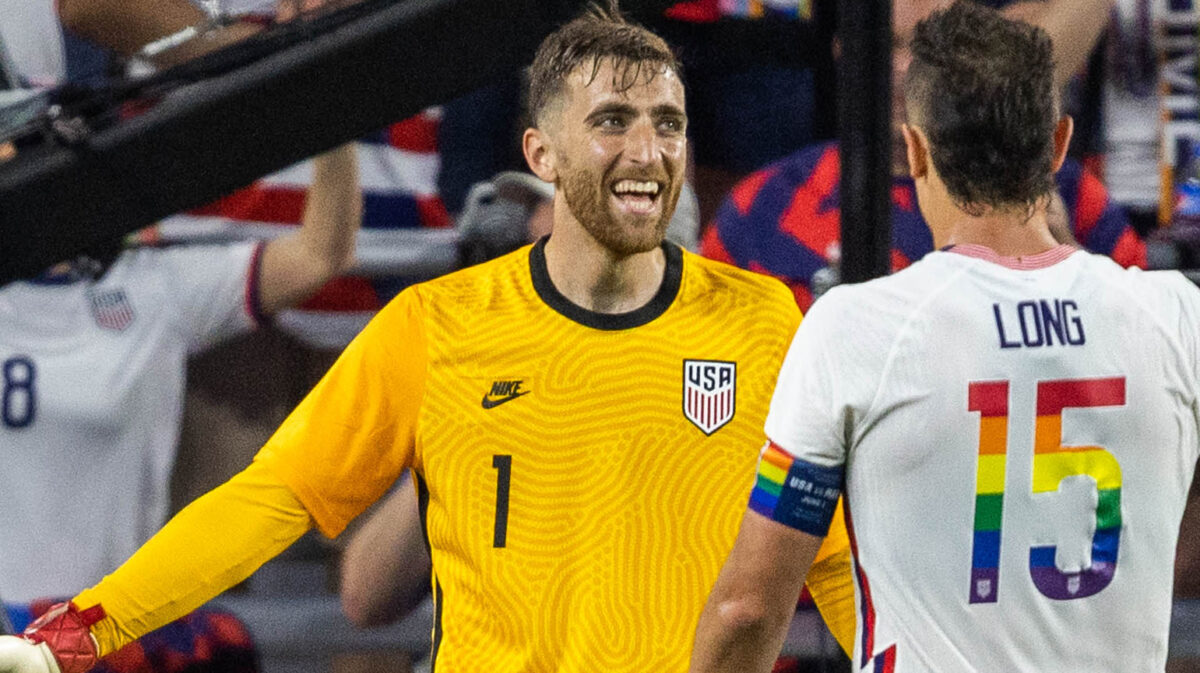 The race for the No. 1 goalkeeper job within the U.S. men’s national team program continues to be one of the major decisions for head coach Gregg Berhalter, but after making his first international appearance since February, Matt Turner looks ready for the challenge ahead of a big summer in his career.

Turner drew the nod in Wednesday’s 3-0 home friendly win over Morocco, totaling eight saves as the Americans picked up a victory in their first of four matches this month. The New England Revolution starter had missed the final World Cup Qualifying window due to a foot injury suffered in preseason camp, which also kept him out of the opening two months of the MLS regular season.

After fighting his way back into Bruce Arena’s starting lineup in Foxborough, Turner also returned to Berhalter’s squad on Wednesday, and delivered an eight-save shutout, providing a clear reminder that he is back to 100%.

“I felt good, no pain in my feet, which is a huge thing,” Turner said after Wednesday’s win. “I just felt happy to wear the shirt again, it’s such an honor and blessing. I was just really excited to do that. Now it’s about taking the next moment as it comes, I’ll prepare like I am playing Sunday.”

“[He was] Very strong, very solid, it’s been a little while for him coming back from the foot injury,” USMNT centerback Walker Zimmerman said about Turner’s performance. “He’s only had five games I believe in New England, but he just has that composure back there. I know he would like to take a couple of the balls back and try and keep the ball while we’re building out of the back, but I thought in terms of his shot-stopping, his cleanliness, he had some really good touches against some of the passes back to him, it was a great performance for him to build on.”

Turner excelled for the USMNT during the 2021 Concacaf Gold Cup, which helped the New Jersey native play a leading role in the Americans’ qualification for the World Cup. The 27-year-old started in nine of the USMNT’s 14 qualifiers, registering five clean sheets, and only conceding five goals in his 810 minutes of play throughout qualifying.

Turner returned between the posts on Wednesday night in Cincinnati, repelling every opportunity that Morocco threw at the veteran’s way. He also benefitted from a bit of help from the crossbar in the 76th minute as Selim Amallah’s penalty-kick chance skied over the diving Turner and rattled the fame before eventually being cleared by the USMNT defenders.

Although it was his first international appearance since Feb. 2, Turner delivered a Man of the Match-caliber performance in his 12th shutout in his 17th overall cap for the USMNT.

“It’s all about preparation and focus, I definitely had a lot of energy coming into the match being able to put on the crest for the first time in four months,” Turner said. “I wanted to go out and put out my best performance. I always have a certain amount of self-belief regardless of the performance I put out there. I was obviously happy with how I played tonight, but soccer is a business of what have you done for me lately. We’ll see how it turns out at the end of this window.”

“Honestly being a goalkeeper it can be easier for you when you’re busy and the balls keep coming at you,” Turner said. “It keeps you in the game, the hardest games mentally cane be where you don’t do anything for 90 minutes and then all of a sudden you have to make one save. There’s different challenges posed for each type of game and luckily tonight I was up to the task.”

Turner will now prepare for involvement in Sunday’s friendly in Kansas City against Uruguay before also fighting for opportunities in the start of the 2022-23 Concacaf Nations League group stage. He will then return to the Revolution for one final MLS appearance on June 19th before heading to English Premier League side Arsenal to begin his first-ever spell in Europe.