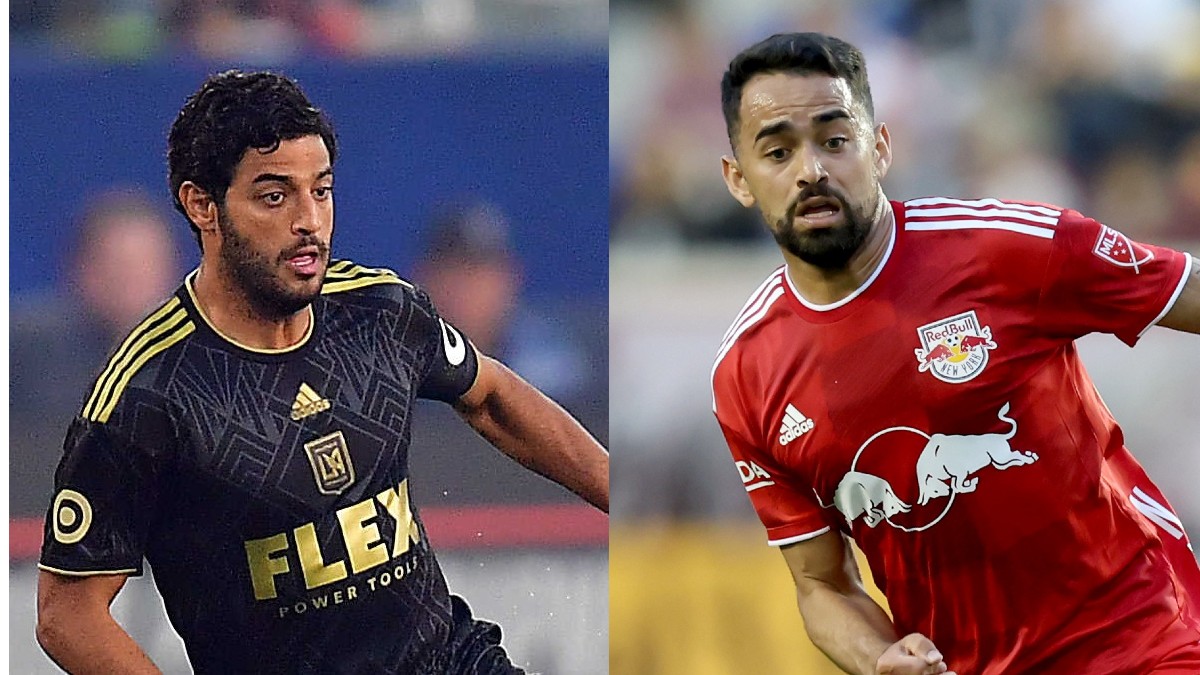 The Red Bulls have built a reputation on road form this season, while LAFC has dropped only five points at Banc of California Stadium. The Red Bulls have the opportunity to jump over rivals New York City FC and come one point away from LAFC’s Supporters’ Shield lead at the same time.

Meanwhile, NYCFC travels to Subaru Park for its biggest test yet in the Eastern Conference. NYCFC has enjoyed a five-game unbeaten streak, despite recent issues in the attack that coincide with coach Ronny Deila’s departure to Standard Liege. The Union have tied eight matches this league season, the most so far in 2022.

Other top matches to watch this week include the Texas Derby between Austin FC and FC Dallas, FC Cincinnati’s home clash with Orlando City, and Sporting KC’s road trip to face the Seattle Sounders in a key Western Conference.

Here are the top matches to watch in MLS Week 16.

The Red Bulls carry the best road record in MLS play all the way across the country to take on LAFC, which came out firing in last weekend’s away draw against the Seattle Sounders.

LAFC star Carlos Vela played 45 minutes last weekend in a draw against the Sounders and will likely reach full fitness just in time for this big match. Vela will duel with Red Bulls’ playmaker Luquinhas and give Red Bulls left back John Tolkin a tough challenge.

This cross-conference clash is another chance for LAFC to extend its lead in the Western Conference. The Red Bulls, with an excellent 5-1-2 away mark, could raise the pressure on NYCFC in the Eastern Conference with a win.

Both the Seattle Sounders and Sporting KC consistently set high standards, and this matchup represents a key opportunity for both of them to pick up points as the halfway point of the 2022 season nears.

Sporting KC earned three points against Nashville SC with a 2-1 away win that halted Nashville’s 25-game home unbeaten streak. Sporting KC is starting to find its groove, with Johnny Russell in great form and centerback Nicolas Isimat-Mirin returning to fitness.

While Sporting KC is in a poor spot because of an awful run to start the year, the Sounders aren’t where they hoped to be because of schedule congestion from their CONCACAF Champions League title push. That is firmly in the past now, and it’s time to pick up points. The Sounders have only lost once in their last five matches and have a favorable schedule ahead.

Raul Ruidiaz has scored three goals in his last three appearances for the Sounders.

The Union have a chance to move into first place in the Eastern Conference with a win over New York City FC. The Union already got the best of NYCFC once this season, earning a 2-0 win in the Bronx in the third game of the regular season.

The Union have managed to stay unbeaten over the last seven games, but all but one of the results have been draws. Only two of those games have seen the Union score more than one goal, highlighting the need for more production up top. NYCFC, on the other hand, has grinded out two wins and draw in its last three matches, with outstanding defensive performances.

FC Dallas is going through one of the most perplexing dips in form in MLS right now. Coach Nico Estevez’s squad went nine games unbeaten before suffering three losses in its last four games, with two of those losses coming against the Vancouver Whitecaps. International duty has heavily affected the team’s attack, but that doesn’t fully explain the issues at hand.

Estevez has a major opportunity to turn things around when FC Dallas faces in-state rival Austin FC. Austin FC earned one of the most impressive wins of last weekend, going on the road to beat CF Montreal while spending half the game with 10 men.

Austin FC’s back line will have its hands full facing Paul Arriola, Alan Velasco and Jesus Ferreira. Austin FC’s scoring has gone down as of late, but the centerback pairing of Julio Cascante and Ruben Gabrielsen shows the resolute defensive shade of Josh Wolff’s side.

Pat Noonan’s side most recently stole one point from their trip to Subaru Park, using Brandon Vazquez’s eighth league goal of the season to earn a 1-1 draw against the Philadelphia Union. FC Cincinnati sits in eighth place in the East, but only has won one of its last five matches in all competitions. Defensively, Geoff Cameron and Nick Hagglund will try and shut down a dynamic Orlando City attack.

Orlando City has also won just one of its last five matches, but comes in to Ohio with points earned in two of its last three. A 2-1 home win over the Houston Dynamo featured Ercan Kara’s first MLS brace for the Lions following his move from Rapid Vienna this offseason. Kara leads the team with six goals so far and has been a shining light in a recently quiet attacking unit.