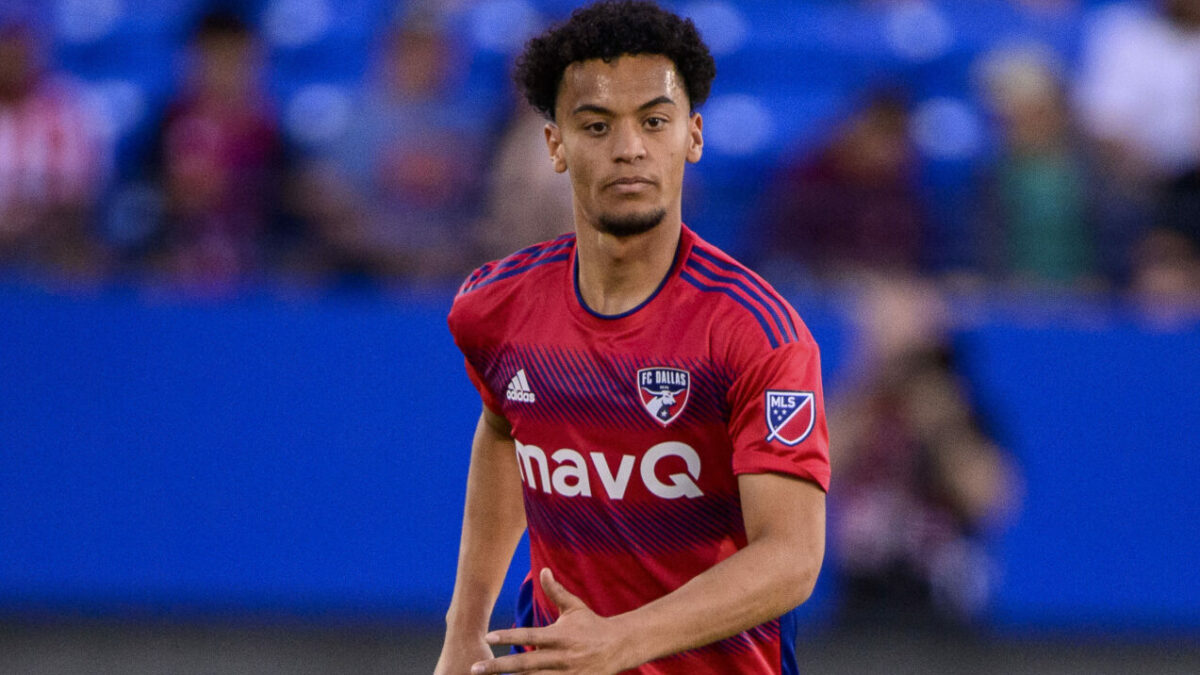 Brandon Servania endured some frustrating moments during the early stages of his MLS career with FC Dallas, but after experiencing his first taste of Europe in 2021 and working his way into Nico Estevez’s starting lineup in 2022, the homegrown midfielder is riding a new wave of confidence this season.

“For me there has been a lot of ups-and-downs, when I first came into the team I was a young kid, I was on loan with Tulsa and had some time with the USMNT U-20’s,” Servania told SBI. “In 2019, I got a chance with the first team here and I thought I did well, but in 2020 I did not play as much and that sort of carried over into 2021 until the end of the season. I think I have learned a lot, I also learned a lot in Austria during my loan spell there. It’s all about continuing to learn and stay confident in myself, that’s been the biggest key for me.

“I’ve known Nico since I was involved with a USMNT camp in 2020, I met him there and when he came the head coach here he reached out and everything has been good,” Servania added. “A lot of similar ideas and tactics from the national team, it wasn’t too much of a difference between him and Luchi so I think for myself and for most of the group it has been a smooth transition. There’s a few small changes in training and within the franchise, but overall it’s been good.”

Servania is in his fourth MLS season for the Texas-based club, returning last summer from a short loan spell in the Austrian Bundesliga. The 23-year-old came onto the scene for FC Dallas in 2019, scoring two goals and three assists in 18 appearances under then head coach Luchi Gonzalez, but struggled for consistency over the next two seasons combined.

The former University of Wake Forest midfielder has since been a key cog in Estevez’s squad, scoring one sensational goal, registering three assists, and starting 10 of his 12 appearances to date. Servania is on pace to set new career-highs in minutes played, goals, assists, and appearances, a testament to the continued work he’s put in and his overall self-belief.

“I definitely put in a lot of work in the offseason and tried to fine-tune my game in a lot of areas,” Servania said. “This year my role is a bit different, I am able to go forward a bit more than in the past. My stats are better than last year, but overall I am just trying to continue to help the team in any way I can.

“It was a special moment for me for sure,” Servania added about his golazo in a 3-1 win over the Colorado Rapids in early-April. “I have been working on my shooting since I was younger and that is definitely a strength of my game. The guys have seen that in practice and they encouraged me to shoot more. It felt great to have one of those go in during a game. The biggest thing was it helped us change the momentum and get the win after halftime.”

Servania’s biggest test came in 2021 when he joined then-Austrian Bundesliga club SKN St. Poelten on loan, teaming up with fellow American midfielder Taylor Booth. Servania totaled 10 appearances in Austria, showing his versatility as a midfielder, right back, and right wingback at times.

Although Servania could not help St. Poelten avoid relegation from the Bundesliga that season, it was a new set of experiences for the midfielder to soak in and learn from.

“The experience in Austria was a crazy one for me, it was a whole, new environment,” Servania said. “I had Taylor Booth there and he is American so he helped me a lot, especially with the language barrier. I tried to learn German and learn a lot of things I did not know before. It was a great experience, I played a lot of different positions.

“I am a central midfielder, but at times I played out wide as a fullback and a wingback so it was a lot of adapting for the good of the team,” Servania said. “Relegation is also a big difference than in MLS, so it was another difference for me, the pressure is a lot higher over there in certain parts of the season. I had to learn a little on the fly while playing there, but overall I think it helped me in my career so far.”

Servania is part of a core of FC Dallas homegrowns continuing their development in MLS, teaming up with fellow starters Jesus Ferreira and Paxton Pomykal in the squad this season. FC Dallas’ academy has helped many former players earn their moves to Europe in recent years including forward Ricardo Pepi, right back Reggie Cannon, and centerbacks Chris Richards and Justin Che.

After working his way through the academy with several of his current teammates, Servania is now focused on leading FC Dallas back into the MLS Cup Playoffs, especially with his close friends by his side.

“It’s been amazing playing with a lot of these guys in the academy and then making the jump with them albeit at different times of our careers,” Servania said. “We’ve been all together for a few years now, you have someone next to you who will have your back. It’s easy to be nervous and make mistakes, but when you have a teammate next to you that you are familiar with, it gives you more confidence. Everyone has a different journey and we are trying to do the best we can to help the club.”

“It’s been a good start, obviously there has been a lot of changes in the offseason with the new staff and some new players, but as you can see we’ve had a good start and hopefully we’re just trying to keep it going. We’ve been working hard during the break to improve some things we need to work on and hopefully we can keep it going when the games start back up.”

Servania has earned one cap to date with the U.S. men’s national team, appearing in a 1-0 friendly victory over Costa Rica back in 2020. A former regular with the USMNT U-20’s during the 2018-19 World Cup cycle, Servania has found it tough to get his name back into the international picture, only being called into one camp under Gregg Berhalter.

However, with more and more players earning opportunities under Berhalter over the past few years, Servania is hoping his strong club campaign helps boost his chances for a USMNT return.

“I actually talked to Gregg earlier this season as he came to watch our first game against FC Dallas as a support for Nico,” Servania said. “The pool is full of a lot of talented players, some from here and some from Europe, so it definitely makes it tough. For me, it’s about focusing on what I can control with FC Dallas and I think the rest will take care of itself.”