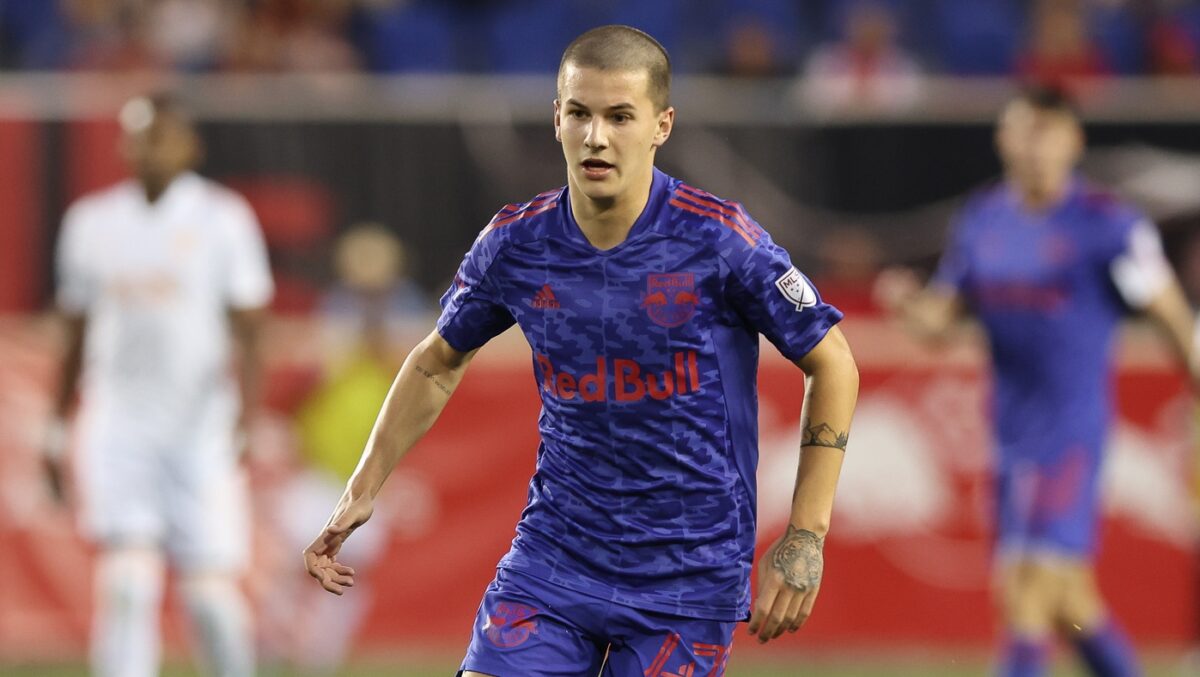 Starting 12 of 14 matches this season and sporting a bleach blonde mullet akin to the lead singer of a Def Leppard cover band, John Tolkin was hard to miss on the field early on in his sophomore season with the New York Red Bulls.

That was the case until Tolkin decided to cut the flow in favor of a buzz cut ahead of the Red Bulls’ 3-1 victory in the U.S. Open Cup over Charlotte FC on May 25.

“It’s always a good time to reset,” Tolkin told SBI Soccer. “With the warm weather now, sometimes it gets in my eyes when we’re playing and it’s also kind of a hassle to take care of, but it will come back stronger than ever,” said Tolkin.

Mullet or not, Tolkin exudes confidence, bringing a mixture of non-stop energy and swagger to the left back position. He is a key reason why the Red Bulls are sitting in fourth place on 23 points.

“When I was younger I did a lot of freestyle tricks so now it feels normal to me, ” said Tolkin. “Coming up through the Red Bulls system they centered me defensively, but in the final third I can get creative with it.”

Unlike last season, Tolkin entered the year as the clear starter at left back with Andrew Gutman returning to Atlanta United after a season-long on loan with NYRB.

“I didn’t really worry about what he [Andrew] was doing,” Tolkin said. “My mentality was just to be better than him every week in training and do what I can do to control things for myself because you know if I’m playing better than him then I should be playing.”

Tolkin earned just over 2,000 minutes of playing time in his first season in MLS, doing so in the middle of a pandemic and playing defensive midfield, left back, and even at centerback for a Red Bulls team that was bounced in the first round of the playoffs by the Philadelphia Union.

“Last year was a great season, but honestly dealing with a pandemic was mentally draining,” Tolkin said.

Through 14 matches this year as the clear starter, Tolkin has handled every assignment thrown his way in Gerhard Struber’s system, with the Red Bulls using both four and five-man backlines this season.

Whether he is a stay-at-home left back or providing width as a wingback, Tolkin has room to improve his play in the final third, but there is no doubt that he is one of the most consistent left-sided defenders in MLS this season.

“I’m comfortable in either spot,” Tolkin said. “I know what my defensive responsibilities are, but in a back five I have a little more freedom to fly up the sidelines and attack one-on-one.”

Tolkin’s strong play this season has not gone unnoticed at the international level, with U.S. Men’s National Team manager Gregg Berhalter mentioning the 19-year-old homegrown as someone he considered calling for the current international window.

“He [Gregg] gave me a call about a week ago,” said Tolkin “One of the things he told me was to get up and down the field as much as possible and we’ll see what happens come the next camp.”

After missing two matches due to health and safety protocols, Tolkin returned to the Red Bulls starting lineup in the team’s final match before the international break, playing 80 minutes in a comfortable 4-1 victory over D.C. United.

The victory over D.C. United not only keeps the Red Bulls within three points of rival New York City FC, who lead the Eastern Conference on 26 points, but it was also their first home win of the season.

“We had a strong group last year, but ask any of the guys, this year just feels a little bit different,” “As a group, we are stronger and have a more unified mentality and that’s what is helping us win games,” said Tolkin.

Coming out of the international break, the Red Bulls are focused on finishing in the top seven, but being from Newark, New Jersey, Tolkin wants to experience his first home playoff game at Red Bull Arena as a player.

“I’ve been to games and witnessed the atmosphere, it’s crazy,” Tolkin said. “So it would be huge for us to finish top four and the Supporters Shield would be a bonus.”