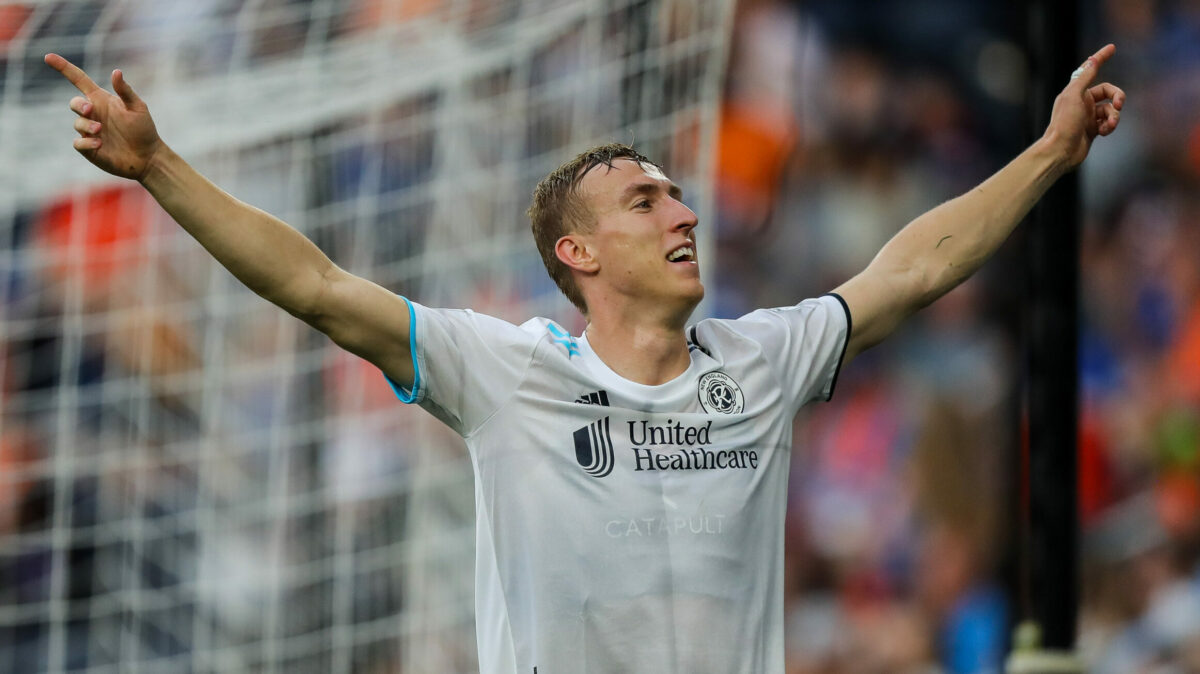 The New England Revolution have had European clubs eyeing their roster for a while now after their Supporters’ Shield-winning 2021 and have completed the third transfer to Europe from their trophy-winning squad.

Polish striker Adam Buksa has been sold to French club RC Lens, the Revolution announced on Tuesday. According to the Boston Globe, Lens is paying $10 million for New England’s leading scorer.

Buksa joins goalkeeper Matt Turner, who is leaving New England to join Arsenal in the summer, and Tajon Buchanan, who moved to Belgian power Club Brugge in January, as Revs players who completed multi-million transfers in the past year.

Buksa has scored 11 goals in all competitions in 2022 after scoring a Revs-high 16 goals in 2021 to help New England set an MLS points record on the way to winning the Supporters’ Shield.

Buksa’s transfer to Lens will become official when the European transfer window opens on July 1.

Here are some other recent news items from around MLS:

Real Salt Lake has been without star attacker Damir Kreilach since April and the wait for his return will continue throughout the summer.

Kreilach, the 2021 MLS All-Star, recently underwent back surgery after suffering a herniated desk, the club announced Thursday. The 33-year-old midfielder made five MLS appearances and scored one goal this season before being sidelined with the injury.

“While Damir’s rehabilitation showed signs of progress, undergoing this minimally invasive procedure will give him the best opportunity for a successful long-term outcome,” RSL senior director of athlete health and performance Theron Enns said in a release. “A timeline for Damir’s return to the field will be determined later as his rehabilitation progresses, but typically these surgeries result in a full recovery for the athlete. It should come as no surprise to anyone that Damir works as hard off the field in rehabilitation as he does on the field, and our staff will be with him every step of the way to assist. RSL will update his progress in the coming weeks.”

Kreilach has been a centerpiece for Real Salt Lake since his 2018 arrival to MLS. The Croatian has totaled 43 goals and 23 assists in 124 appearances for RSL. He scored 16 goals and chipped in nine assists in 2021, helping lead the club on a Cinderella run to the Western Conference Final of last season’s MLS Cup Playoffs.

In Kreilach’s absence, RSL has surged its way into a tie for second place in the Western Conference on 25 points.

Real Salt Lake did boost its attacking options with 18-year-old Diego Luna joining the club on a permanent deal.

Luna joins the Western Conference club from USL side El Paso Locomotive and has signed a two-and-a-half year MLS contract, with options for 2025 and 2026. Luna broke onto the scene with El Paso over the last two seasons, scoring 13 goals in 43 appearances.

He debuted in RSL’s 2-1 loss to the Vancouver Whitecaps on Saturday, the lone MLS match over the international break.

A California native, Luna has made three appearances to date for the U.S. Under-20 men’s national team.

Medina, 15, has signed a three-and-a-half year MLS contract with the Quakes and is the third youngest player in club history. In addition to competing for the Quakes Academy, including at the 2022 Generation adidas Cup, Medina has also made two appearances for Earthquakes II in MLS NEXT Pro.

“Cruz is an incredibly talented young individual that we think very highly of, and we have a plan in place to maximize his potential here in San Jose,” said Earthquakes General Manager Chris Leitch. “I’d like to thank all of the coaches within the Quakes Academy as well as Cruz’s parents, Antonio and Laura, for developing him into the person and player he is today.”

Medina has most recently featured for the USMNT U-17 side, scoring against Portugal in March.