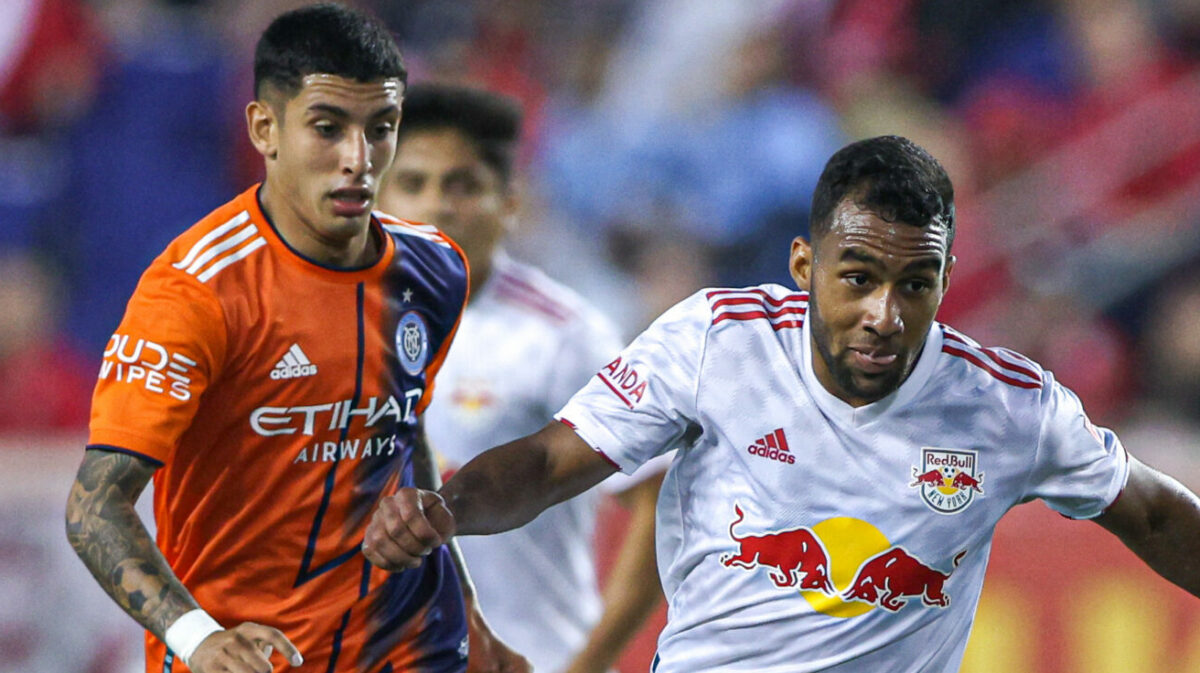 The New York Red Bulls got the best of New York City FC, capitalizing on a red card and an early second-half goal from Lewis Morgan to down their rivals and earn a spot in the U.S. Open Cup semifinals.

Union Omaha’s dream run to the quarterfinal came to a disappointing end, as Sporting Kansas City put six goals past the USL League One club to earn its own place in the semifinals. Sporting KC winger Daniel Salloi scored two goals to get Sporting KC started in the home rout, setting up a semifinal clash with Sacramento Republic.

Here is a look back at the Open Cup quarterfinal results to date.

The Red Bulls continue to breeze through Open Cup matches, with their quality depth and lack of injuries or absences as of late. This quarterfinal showdown against in-town rivals NYCFC was no different, as the Red Bulls found the advantage early in the second half and frustrated NYCFC into a difficult end to the match.

Lewis Morgan found a breakthrough after the Red Bulls attacked relentlessly in the first half. Morgan stabbed a ball headed into the area by Aaron Long into the back of the net.

Things only got worse for NYCFC as midfielder Thiago Andrade was sent off for headbutting an opposing player in the 62nd minute. The Red Bulls doubled the lead just eight minutes later, as Luquinhas picked up a rebounded shot, took a deft touch and scored.

Red Bulls midfielder Omir Fernandez added a third goal in the first minute of stoppage time, finding himself wide open to receive a cross from Cameron Harper in the middle of the box.

A skirmish after the final whistle resulted in a red card for NYCFC midfielder Maxi Moralez and the Red Bulls’ Tom Edwards. Edwards is set to miss the Open Cup semifinal against either Orlando City or Nashville SC.

This win makes it three Hudson River Derby wins in a row for the Red Bulls, with the previous two coming in the 2021 MLS season. The next meeting will surely produce major implications for league standing, as NYCFC leads the Eastern Conference and the Red Bulls are one point behind.

Union Omaha’s dream U.S. Open Cup run came crashing back to reality as Sporting KC continues to find its feet in MLS play and in the Open Cup.

Salloi provided the game’s best play as he fooled a defender to make plenty of space for a shot and his second goal of the game in the 53rd minute.

Sacramento Republic took down another MLS opponent, entering Dignity Health Sports Park on Tuesday night and giving the LA Galaxy a run for their money in this quarterfinal meeting.

The Open Cup’s leading scorer in 2022, Rodrigo Lopez, scored his fourth goal of the tournament in the fourth minute to give the Republic an early lead. The Galaxy answered by forcing an own goal on a corner kick to tie it up in the 18th minute at 1-1.

The Galaxy kept the majority of possession with 63.8% of the ball and sent four shots on goal. Sacramento remained dangerous on the counter attack, with three shots on goal and 11 total shots.

Luis Felipe scored the game-winning goal in the 70th minute, with this long-range strike to put his team into the Open Cup semifinals.