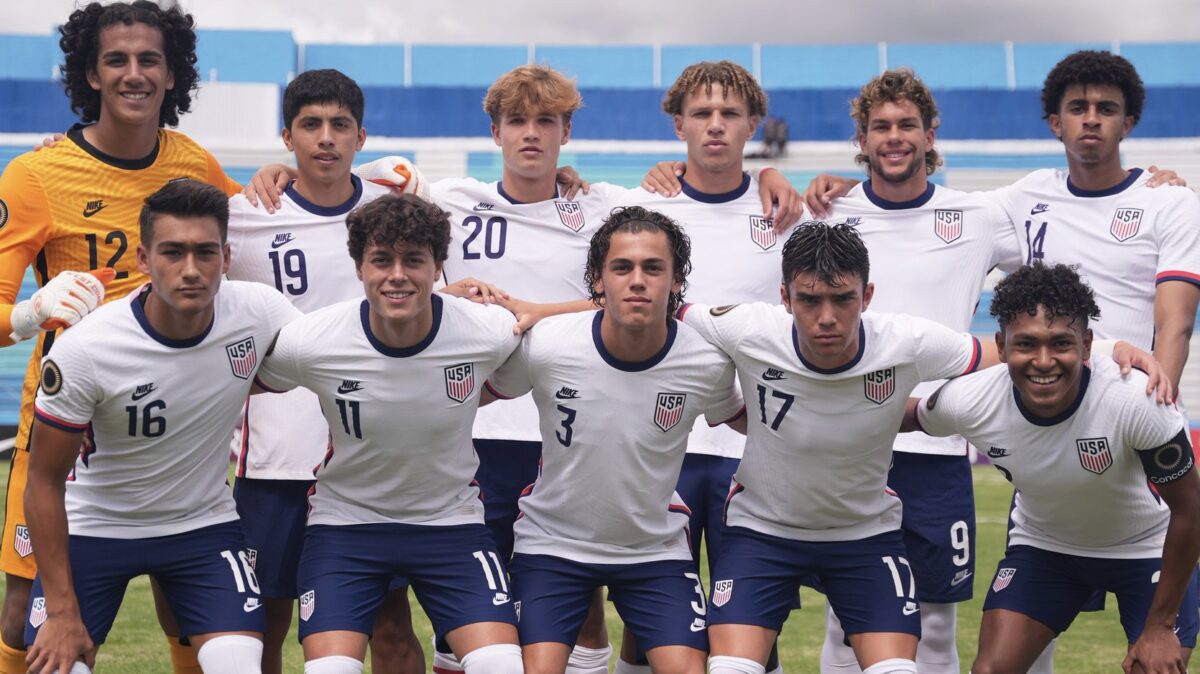 The U.S. Under-20 men’s national team came out of the gates swinging at the Concacaf U-20 Championship on Saturday, picking up a first competitive victory under head coach Mikey Varas.

Paxten Aaronson and Niko Tsakiris each registered braces while five other players got on the scoresheet as the USMNT U-20’s rolled past Saint Kitts and Nevis 10-0 at Estadio Nacional in Tegucigalpa. Quinn Sullivan added two assists off of the bench in a convincing opening day victory for the Americans.

VAR played a major role in the opening two goals of the match, being used on penalty-kick decisions. First, Rocco Browne bundled into Alejandro Alvarado in the Saint Kitts box, allowing Cade Cowell the opportunity to slot home from the spot for a 1-0 lead in the 16th minute.

Saint Kitts was left frustrated again by VAR in the first half as DeJahne Morris was whistled for a handball in the box. Caden Clark slotted home from the penalty spot for a 2-0 lead for the USMNT U-20’s.

The USMNT U-20’s extended their advantage to 3-0 before halftime as Tyler Wolff added his name to the scoresheet. Mauricio Cuevas’ low cross into the box forced Xander Parke out of the position, allowing Wolff the chance to poke into an empty net.

Rokas Pukstas added a fourth goal in the first half for the USMNT U-20’s, heading into an empty net after Parke could not punch away a corner kick. Pukstas’ header lobbed over the Saint Kitts defenders and nestled into the back of the net.

Cuevas added his first goal of the tournament in stoppage time, cutting onto his left foot and unleashing a strong shot into the bottom-left corner. The right back was a constant thorn in the Saint Kitts backline’s side all afternoon and was rewarded with a sensational finish.

Tsakiris’ penalty kick goal paired with an own goal from Parke in stoppage time capped a seven-goal first half for the Americans.

Paxten Aaronson and Quinn Sullivan came off of the bench after halftime and connected for the eighth goal of the match. Sullivan’s pass to a streaking Aaronson allowed the Philadelphia Union midfielder the chance to drill a low shot into the bottom corner.

Aaronson added his second goal of the match in quick succession, racing onto an upfield pass from Diego Luna before finding the bottom-left corner of Parke’s net.

Tsakiris added his second goal of the match, getting on the end of Sullivan’s low cross in the box to tap home and cap the final score at 10-0.

Antonio Carrera made three saves for the USMNT U-20’s, posting his first clean sheet of the tournament. Jack McGlynn and Michael Halliday also appeared off of the bench for their first minutes in Honduras.