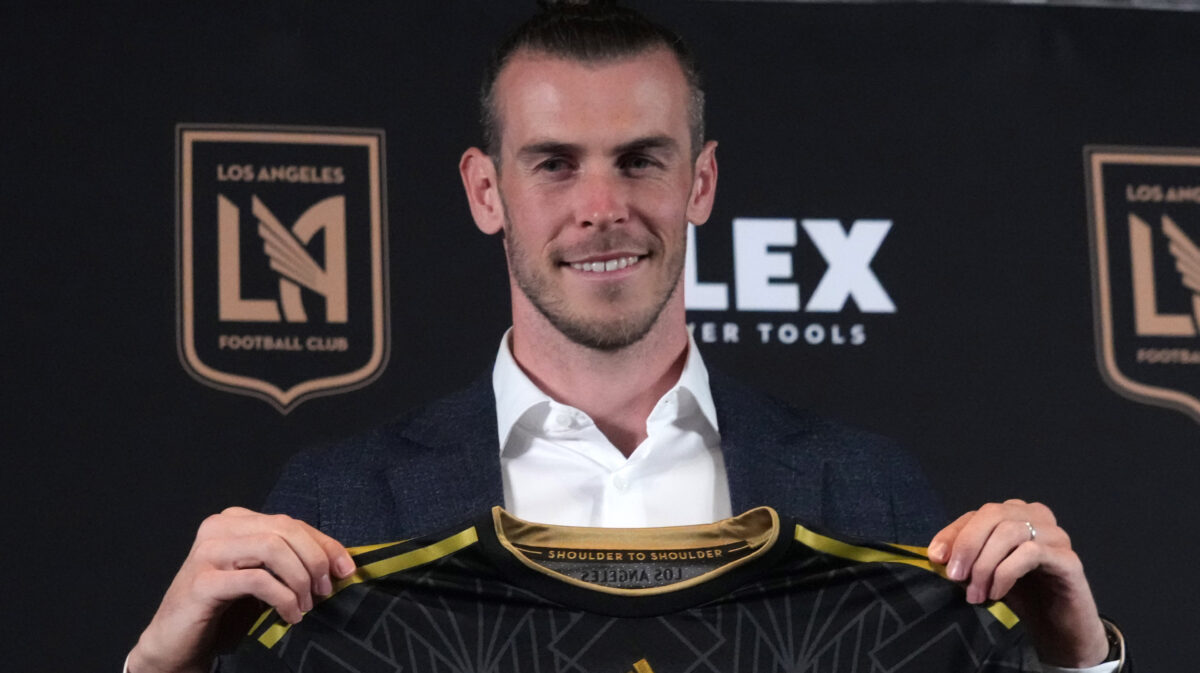 In the latest edition of well-worked cap gymnastics by Co-President and General Manager John Thorrington, LAFC officially introduced Gareth Bale as the latest member of the Black and Gold on Monday and the Welsh superstar is now focused on kickstarting his MLS career in style.

Bale, 32 signed for LAFC on June 27 on a free transfer from Real Madrid but did not arrive in Los Angeles until the MLS transfer window opened on July 8. Now with his club debut right around the corner, Bale has reiterated that he isn’t panning a short-term stay with LAFC.

“I haven’t come here for the short term,” said Bale in a press conference with reporters. “I want to make my mark on this league and I’m really looking forward to meeting my teammates and getting started.

“It also gives me the best opportunity to keep going to the next Euros, maybe further,” he added. “My plan is to really work hard. It’s a great physical team [at LAFC], medical staff, performance staff at the training ground. We’ve got a great plan going forward to get me up to speed and hopefully last as long as possible.”

The addition of Bale is the latest big-name addition for LAFC this transfer window, with defender Giorgio Chiellini already joining on a free transfer from Juventus. Both players did not have to sign Designated Player contracts on the roster, opening the door with an additional reinforcement this summer, should LAFC decide to make another move.

“This is a league that is really growing, especially in the last five years, I don’t think anyone sees it as a retirement league…but it is something that is exciting, to be able to play in front of the 3252 is what you play football for,” said Bale.

Through 19 matches, LAFC sits atop the Western Conference and leads the Supporters Shield Race on 39 points with Bale and Chiellini yet to play a single minute for the Los Angeles-based club.

Chiellini was on the bench and Bale was in attendance Friday for LAFC’s 3-2 victory over cross-town rivals, the L.A. Galaxy. The duo’s debuts will likely come on Sunday against Nashville SC, as LAFC continues its push for a second Supporters’ Shield in club history.

How Bale fits into the Black and Gold attack remains to be seen, but the attacking depth at manager Steve Cherundolo’s disposal is on paper, one of the best in MLS history. 2019 MLS MVP Carlos Vela remains a key leader in LAFC’s attack while in-form Cristian Arango has netted seven goals in 19 appearances this season.

Bale has already eyed up a partnership with Vela in the attacking third, a duo that could quickly become MLS’ most deadliest by season’s end.

“I’m really looking forward to working with him,” said Bale. “I’ve known [Carlos] and played against him in the past so we get on very well and I’m looking forward to lighting up a partnership and hopefully winning some games and trophies.”

LAFC has won three of its last five matches in league play and holds a two-point lead over Austin FC for first place in the Western Conference.