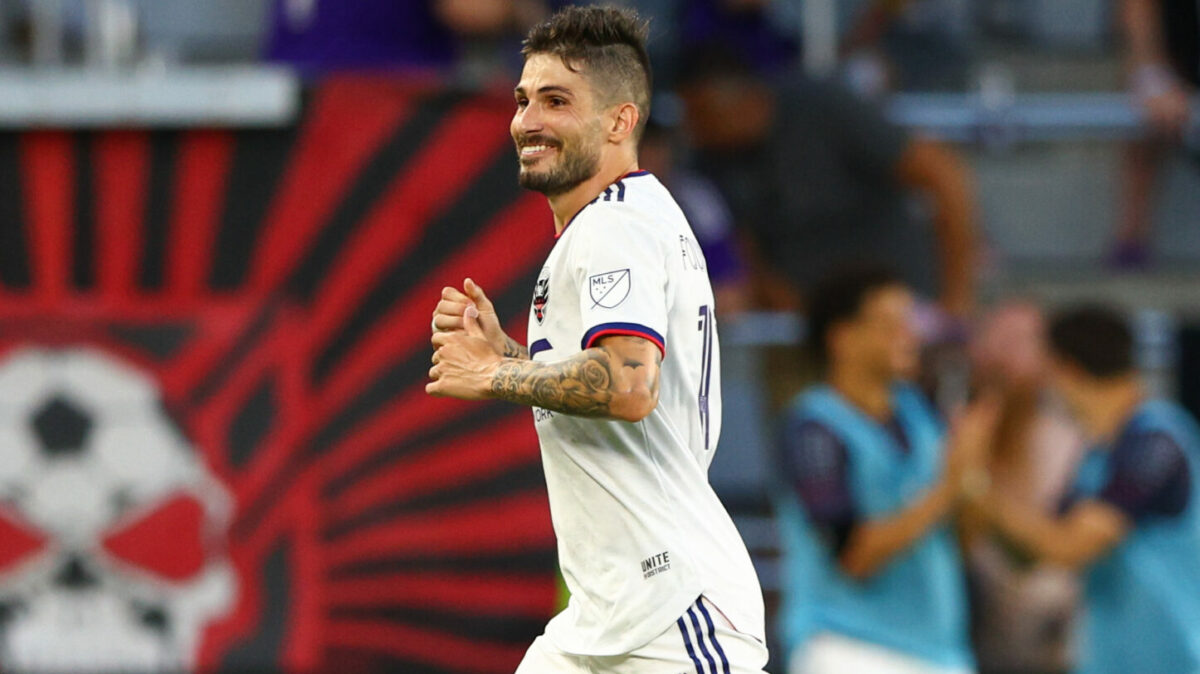 A packed week of MLS action concluded Monday with D.C. United and the L.A. Galaxy rolling to respective victories.

Taxiarchis Fountas netted a hat trick as D.C. United outlasted Orlando City 5-3 at Exploria Stadium. Fountas scored two goals in the opening eight minutes of the match before capping off his perfect night in the 51st minute. Despite a valiant comeback attempt from the hosts, Kimarni Smith and Nigel Robertha both scored late in the match to cap off an important victory for Chad Ashton’s squad.

The L.A. Galaxy also rolled to three points on Monday, using goals from Javier Hernandez, Dejan Joveljic, and Rayan Raveloson to down CF Montreal 4-0 at Dignity Health Sports Park. Hernandez got the party going with a goal in the opening minutes of the match before Joveljic scored from the penalty spot before halftime.

Raveloson scored twice in the second half as Greg Vanney’s side rebounded from a dismal defeat to Minnesota United.

Among the victors of the weekend are the New York Red Bulls, which picked up three more points on the road, and FC Cincinnati, which earned one point against the New England Revolution.

The weekend’s high-profile match came in New York City, with Atlanta United furthering NYCFC’s pain under interim coach Nick Cushing. Valentin Castellanos scored twice to put himself tied atop the MLS Golden Boot standings, but it was Atlanta United’s Dom Dwyer who scored a late goal to take one point.

Minnesota United dashed the hopes of another key performer in the Western Conference. Emanuel Reynoso is one of the week’s best players, with two goals and one assists in a 3-2 takedown of RSL.

The Philadelphia Union’s lackluster attack continued Sunday as Jim Curtin’s side played out a scoreless draw with the Columbus Crew at Lower.com Field. Andre Blake made a diving penalty kick save on Pedro Santos, which was the main highlight of the night for either team.

Here are the highlights of this weekend’s MLS Week 17 action:

Man of the Match: Rayan Raveloson scored twice for the Galaxy in the second-half, helping round out a dominant performance by the hosts.

Moment of the Match: Dejan Joveljic’s penalty kick prior to halftime helped the Galaxy pad their lead and eventually set the tone for a busy second-half performance.

Match to Forget: Samuel Piette is a leader in the CF Montreal squad, but the Canadian midfielder could not help his side avoid a rout on Monday. Piette only played 45 minutes, being yellow carded once before being replaced.

Man of the Match: Jon Gallagher was impactful in the final third, registering two assists for Austin FC in the comeback victory.

Moment of the Match: Maxi Urruti’s go-ahead goal in the 59th minute helped Josh Wolff’s side complete the comeback in Colorado and claim an important three points on the road.

Match to Forget: Auston Trusty was poor for the Rapids, losing his only duel of the match, but also committing an error that led to one of Austin FC’s goals. The soon-to-be Arsenal defender will hope to avoid errors like Monday’s once he moves abroad.

Man of the Match: Alan Velasco helped FC Dallas earn one point at home, scoring the lone goal for his team. The 19-year-old also completed three dribbles, made two tackles, and won six duels in his 80-minute performance.

Moment of the Match: Leonardo Campana came off of the bench and helped Inter Miami steal one point at the death.

Match to Forget: Gonzalo Higuain struggled in attack for Inter Miami, failing to register a single shot in his 61 minutes on the field.

Man of the Match: Taxi Fountas delivered a strong performance for D.C. United, scoring three goals in a 46-minute span to propel the visitors past Orlando City.

Moment of the Match: Nigel Robertha’s stoppage-time goal capped off a frantic night at Exploria Stadium and handed the visitors an important three points this summer.

Match to Forget: Rodrigo Schlegel failed to deal with Fountas’ non-stop running, being beaten several times by the in-form forward.

Man of the Match: Valentin Castellanos fronted an NYCFC attack that struggled aside from his own production. Two goals from Castellanos were enough to at least earn a point for the home side.

Moment of the Match: Dom Dwyer’s 86th-minute goal showed Dwyer’s effectiveness as a late sub and earned a point from a tough road trip for Atlanta United.

Match to Forget: Atlanta United defender George Campbell couldn’t keep up with Castellanos in a foot race on the first NYCFC goal and found himself in no man’s land on the second goal conceded by Atlanta.

Man of the Match: Andre Blake earned the point for the Union by making five saves, including one of a penalty kick.

Moment of the Match: The Crew received a golden opportunity to go ahead with a penalty call in the 19th minute. Union goalkeeper Andre Blake stopped Pedro Santos’ effort.

Match to Forget: The Union midfield ceded plenty of possession and constant movement into the attacking third for the Crew. Alejandro Bedoya won only two duels and generally struggled to stop the Crew’s movement.

Man of the Match: Gustavo Bou showed he can be the Revs’ answer at center forward with a header goal and eight shots.

Moment of the Match: Brenner continued to impress, scoring the equalizing goal for FC Cincinnati after a quick turnover in the middle of the field in the 73rd minute.

Match to Forget: Five minutes after making an incredible point-blank save, 23-year-old goalkeeper Djordje Petrovic’s blunder led to FC Cincinnati’s equalizer. Petrovic tossed the ball into the middle of the pitch, where Damian Rivera had little chance against two onrushing opponents.

Man of the Match: Aaron Long not only scored the goal to put the Red Bulls ahead, but he also made four clearances and won two aerial duels on the way to defending a lead while down a man for a significant stretch.

Moment of the Match: Aaron Long headed home a cross from Lewis Morgan in the 53rd minute to hand the Red Bulls a lead they were determined to defend.

Match to Forget: Johnny Russell couldn’t quite break through on the right side and make the most of Sporting KC’s man advantage for the final 17 minutes of the match.

Man of the Match: Emanuel Reynoso shined in this game, scoring two goals of his own and nearly setting up Luis Amarilla for another one.

Moment of the Match: Emanuel Reynoso’s second goal, in which he punched in a rebound of his own saved penalty kick, made for an uphill battle for RSL heading into the second half.

Match to Forget: RSL goalkeeper Zac MacMath could have done better on all three Loons goals, with Reynoso beating him right down the middle, then punching in a clear-cut penalty rebound and Luis Amarilla chipping over him.

Moment of the Match: Andre Shinyashiki’s 74th-minute goal showed that Charlotte FC’s carving of the Dynamo back line could finally pay off.

Moment of the Match: Jaroslaw Niezgoda put a well-placed shot into the top of the net in the 70th minute, turning the tide completely in the Timbers’ favor.

Match to Forget: Nashville goalkeeper Elliott Panicco had a difficult showing, giving up a penalty kick which Dairon Asprilla scored and failing to make a stop when coming out to face Jaroslaw Niezgoda on the second goal.

Man of the Match: Benji Kikanovic provided a surprise for the Quakes in just his fourth start. Kikanovic scored both goals, including a late goal that proved to be the winner.

Moment of the Match: Kikanovic found space in the box and sent a shot into the opposite side netting to stretch the Quakes’ lead to two goals in the 87th minute.

Match to Forget: The Fire struggled to keep control in the midfield. Giveaways and poor passing from Gaston Gimenez left the Fire with little chance to stop the Quakes’ speed.