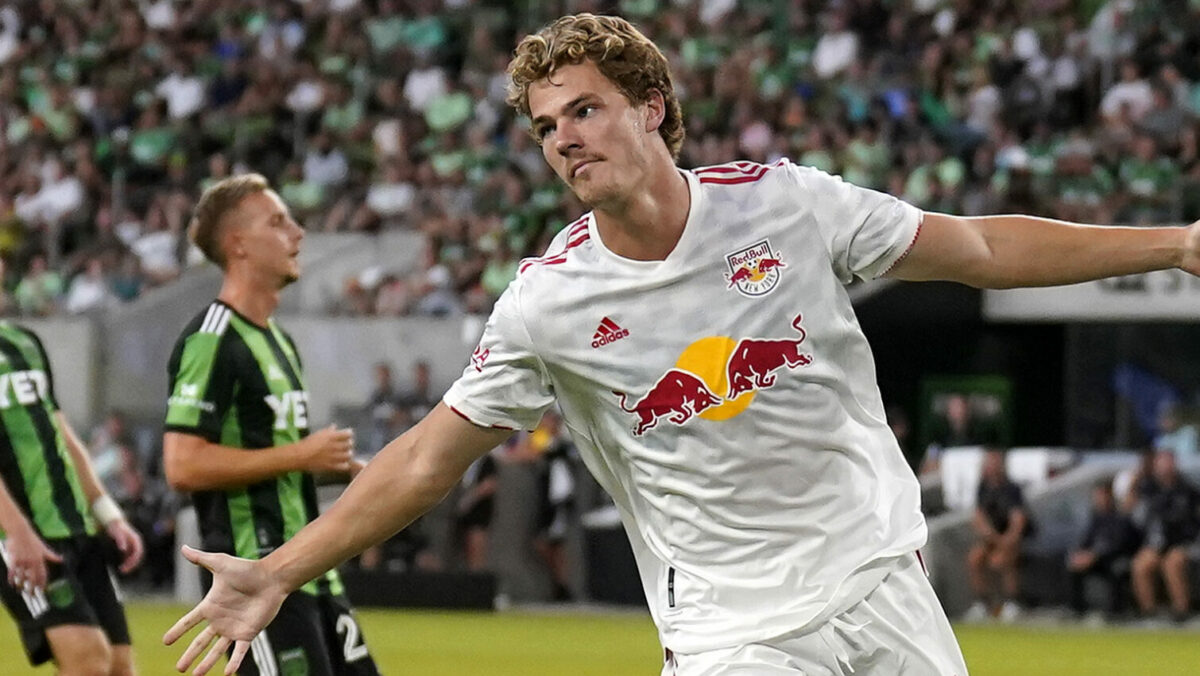 The New York Red Bulls rebounded nicely from last weekend’s Hudson River Derby loss to NYCFC by downing Austin 4-3 at Q2 Stadium. Gerhard Struber’s squad scored two goals in each half to pick up three points against one of the top teams in MLS this season. Tom Barlow and Cameron Harper both scored in the second half as the Red Bulls jumped to third place in the Eastern Conference with the result.

Cristian Arango and Bale celebrated goals as LAFC downed Sporting KC 2-0 at Children’s Mercy Park, remaining top of the Western Conference for another weekend. Arango’s strong season continued as the in-form forward broken the deadlock with his ninth goal of the season. Arango set up Bale in the dying stages of the match, watching as the Welsh international slid home a left-footed effort into the bottom corner.

New York City FC gave Valentin Castellanos a winning send-off as the defending MLS Cup winners defeated Inter Miami 2-0 at Yankee Stadium. Maxi Moralez opened the scoring in the first half thanks to Castellanos’ assist before Heber iced the club’s fourth-straight victory with a second-half finish off the bench.

CF Montreal snagged three points on the road at D.C. United, using a first-half brace from Romell Quioto to earn a 2-1 victory. Quioto needed only one minute to open the scoring at Audi Field, making Donovan Pines pay after the centerback’s sloppy error in the back. Quioto added a second goal before halftime for the Canadian club. Steve Birnbaum’s consolation goal could not help Chad Ashton’s squad about a third league defeat out of the past four matches.

Djordje Petrovic stole the show for the New England Revolution, making six saves in a scoreless draw with the Columbus Crew on Saturday. Petrovic was stellar, helping Bruce Arena’s side avoid defeat in Columbus and at least walk away with one point.

Elsewhere, the Philadelphia Union edged Orlando City 1-0 at Exploria Stadium thanks to Daniel Gazdag’s 10th league goal of 2022. FC Cincinnati and Nashville SC shared the spoils in a 1-1 draw at TQL Stadium.

Man of the Match: Sebastian Driussi was the best player on the field in Texas on Sunday night, scoring two goals, creating the most chances (3), and also completing the most dribbles (3).

Moment of the Match: Tom Barlow’s goal in the 65th minute proved to be the deciding goal between the two teams, capping off a seven-goal thriller in Austin.

Match to Forget: Andrew Tarbell’s error on the opening goal easily could’ve been avoided and ended up hurting Austin FC’s chances in the final scoreline.

Man of the Match: New Galaxy signing Gaston Brugman made sure Atlanta United would have no chance to equalize. The Uruguayan won 8 duels and made three tackles to preserve the shutout.

Moment of the Match: Kevin Cabral scored his first goal of the season by punching the ball in inches away from the goal line in the seventh minute.

Match to Forget: Atlanta United midfielder Amar Sejdic jumped forward as Atlanta United gave up a header in the middle of the field in the seventh minute. Sejdic and fellow center mid Matheus Rossetto’s poor positioning allowed the Galaxy to outnumber the Atlanta defense and score the game’s only goal.

Man of the Match: Maxi Moralez scored the opening goal for NYCFC and also finished the match with the most chances created (3) and with three duels won.

Moment of the Match: Heber needed only 12 minutes to double NYCFC’s lead, giving Nick Cushing’s squad some breathing room to close out the home victory.

Match to Forget: Drake Callender conceded from an acute angle in the early going before eventually being beat a second time later in the match. Despite making four saves, Callender will feel disappointed he couldn’t offer more for Inter Miami in the defeat.

Man of the Match: Djordje Petrovic was stellar in goal for the Revolution making six saves and helping Bruce Arena’s side repel an in-form Crew attack.

Moment of the Match: Cucho Hernandez looked destined to break the deadlock late at Lower.com Field, but the in-form striker was denied by Petrovic in the 80th minute.

Match to Forget: DeJuan Jones was tested often by the Crew wingers, losing five of his six duels, and also picking up a yellow card in the draw. Luckily though for Jones, New England did enough to walk away with one point.

Man of the Match: Brandon Vazquez went down as the hero who saved a point in front of the home crowd. He extended his league lead in headed goals with his sixth of the season.

Moment of the Match: Hard to argue with Vazquez’s equalizer that earned Cincinnati a point and a successful bounce back after having its six-game unbeaten streak snapped last week.

Match to Forget: It was another scoreless night for CJ Sapong, whose form has hit ice cold after being blanked in nine straight matches. On a night when Hany Mukhtar was absent, Nashville needed a hero and Sapong was a ghost.

Man of the Match: Jakob Glesnes was strong defensively in the clean sheet for the Union, winning four of his five duels, making seven clearances, and assisting on the winning goal scored by Daniel Gazdag.

Moment of the Match: Tesho Akindele had a golden chance late to steal one point for Orlando City, but the veteran striker’s header soared just wide of Andre Blake’s goal.

Match to Forget: Ercan Kara was quiet in attack for Orlando City, failing to register a shot on goal in the loss. Kara only had 21 touches in the match and also picked up a yellow card.

Man of the Match: Michael Bradley scored twice in the lopsided home win for Toronto FC, helping propel the Canadian club to a needed victory. Bradley also completed the most passes (59) and won five of his seven duels in the match.

Moment of the Match: Bradley’s second goal of the first half truly iced a dominant 45 minutes for TFC and condemned Charlotte FC to an embarrassing result.

Match to Forget: Christian Fuchs was sent off in the 65th minute for a straight red card offense, adding insult to injury for Charlotte FC.

Man of the Match: Romell Quioto netted two goals in the first half for Wilfried Nancy’s squad, giving the Honduran forward nine league goals in 2022. Quioto proved once again he can deliver some big moments for CF Montreal when needed.

Moment of the Match: Quioto’s second goal in the opening 32 minutes helped CF Montreal pad its advantage at Audi Field and truly put D.C. United in a tough situation for the remainder of the match.

Match to Forget: Donovan Pines’ sloppy error led to Romell Quioto’s first goal of the match and truly put the hosts in an early hole at home.

Man of the Match: Bongokuhle Hlongwane assisted on Minnesota United’s opening goal and delivered the winning goal in an important road victory over the Houston Dynamo. Hlongwane completed three dribbles and also made 11 recoveries, stepping up big in Adrian Heath’s attack.

Moment of the Match: Hlongwane’s goal added some breathing room for Minnesota United despite Fafa Picault’s late insurance finish for the Dynamo.

Match to Forget: Steve Clark only made one save in the loss for the Dynamo, failing to deal with either of the two goals scored by Minnesota United.

Man of the Match: Cristian Arango was all over the field for LAFC, scoring the opening goal for the visitors and setting up Gareth Bale’s first in MLS play. Arango also created the most chances (2) and completed the most dribbles (4) to deliver a Man of the Match performance on the road.

Moment of the Match: Bale iced the victory for LAFC by coming off the bench and scoring his first MLS goal, condemning Sporting KC to a 13th league defeat of the year.

Match to Forget: It was an ineffective MLS debut for Sporting KC midfielder Erik Thommy, as the German failed to offer much in midfield. Thommy lost seven of eight duels, only completed 78% of his passes, and completed just one of his eight crossing attempts.

Moment of the Match: RSL gave up possession quickly on a throw-in deep in their own territory, allowing Jesus Ferreira to strike after a quick transition in the 14th minute.

Match to Forget: Jefferson Savarino had seven shots, but could only direct one on target. The RSL attack struggled mightily in this match, despite holding 69% of possession.

Man of the Match: Jordan Morris seemed to be everywhere in this match. He scored a goal to level things in the first half, then drew a penalty that led to the winning goal.

Moment of the Match: Jordan Morris was knocked down in the box by Rapids goalkeeper William Yarbrough in the 69th minute, leading Nico Lodeiro to convert a penalty and save the Sounders from a disadvantage due to Kelyn Rowe’s 47th-minute red card.

Match to Forget: Diego Rubio had the opportunity to grab the reins of the Rapids’ attack, with the team a man up for almost the whole second half. Rubio and Gyasi Zardes’ inability to create dangerous chances with the man advantage cost the Rapids dearly.

Man of the Match: Chris Mueller proved instrumental in the second half. Mueller showed his toughness in winning the ball inside the box and sent a well-placed cross to Rafael Czichos for the Fire lead. Then, Mueller scored a beautiful goal to seal the win in the 90th minute.

Moment of the Match: Rafael Czichos’ 76th-minute header put the Fire ahead late in the match, as the Fire responded to an excellent start to the second half by the Whitecaps.

Match to Forget: Julian Gressel experienced a poor debut with his new team. Gressel was subbed off at halftime after completing only 62.5% of his passes and struggling to challenge the Fire defensively.

Man of the Match: Dairon Asprilla inspired the Timbers to a comeback win with four total shots, the winning goal and eight duels won.

Moment of the Match: Santiago Moreno sent an inch-perfect cross to the back post in the 71st minute, where Dairon Asprilla headed the ball in to secure a comeback win for the Timbers.

Match to Forget: Jackson Yueill failed to step to Santiago Moreno as Morena assisted the winning goal. Yueill also could not keep up with Diego Chara as the Timbers equalized in the 53rd minute.