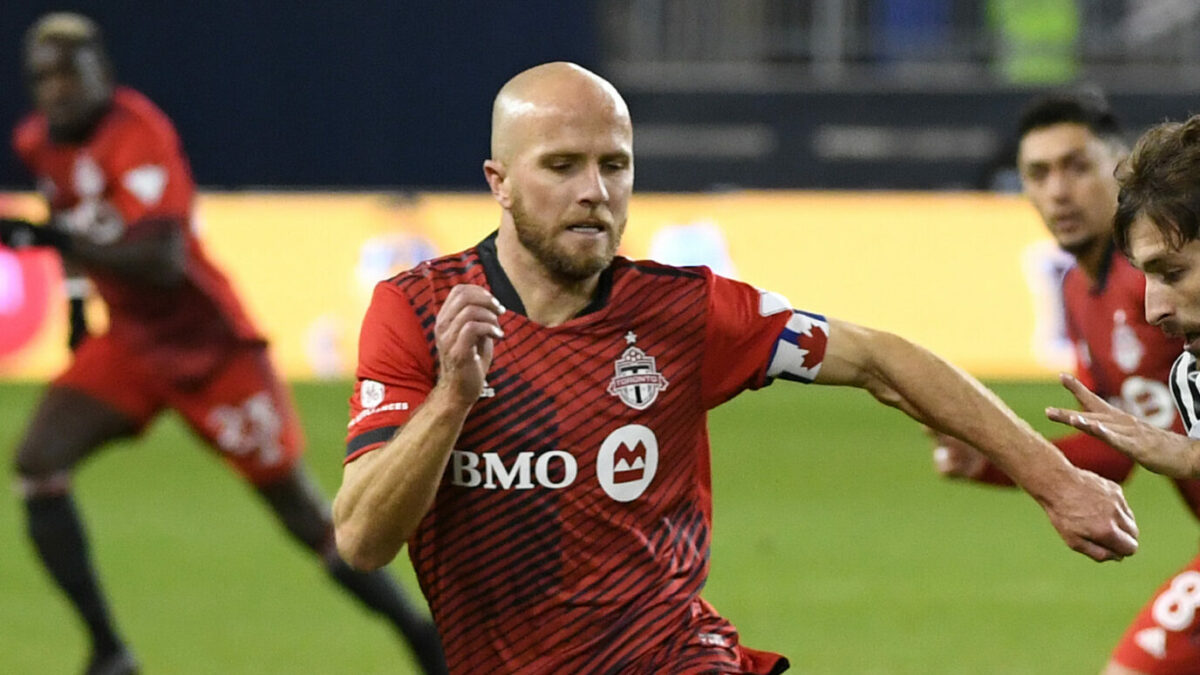 A first-half brace for Michael Bradley in a blowout win for a revamped Toronto FC squad, a sweet volley from Sebastian Driussi and the Sounders’ encouraging comeback win highlight Week 22 in Major League Soccer play.

Toronto FC is clearly the biggest talking point of the week. New signings Lorenzo Insigne and Federico Bernardeschi lived up to the hype, with Bernardeschi scoring and assisting and Insigne notching an assist. Michael Bradley scored two goals and Toronto FC finished with four goals in one half for the first time in club history.

Meanwhile, the Sounders earned a needed win after tumult mounted in the midst of a three-match losing streak. The Sounders were down one man for almost the entire second half, but continued to challenge Robin Fraser’s side by attacking and earning a comeback 2-1 win.

Here are the top moments from MLS in Week 22.

With 13 goals in seven years with Toronto FC, it’s obvious that Michael Bradley is not known for his ability to score goals. However, Bradley does get the opportunity every now and then to show off his dribbling ability or knock in powerful shot from 30 yards away.

Bradley scored a first-half brace, heading in a corner kick in the 10th minute and dribbling past a defender and chipping Charlotte FC goalkeeper Kristijan Kahlina for what must be considered one of Bradley’s best goals in a TFC uniform.

Player of the Week this week could also easily go to Federico Bernardeschi, Toronto FC’s big new signing who assisted Bradley’s first goal and scored an impressive long-range goal of his own. Jesus Ferreira also put in an excellent shift for FC Dallas, scoring to end RSL’s 10-game home winning streak and ending a seven-game winless drought for his own team.

Romell Quioto netted twice for CF Montreal in a 2-1 road win over D.C. United, continuing what has been another impressive campaign for the Honduran attacker.

When Kelyn Rowe received a fairly dubious second yellow card two minutes into the second half, it felt something like a repeat of the Sounders’ 3-0 home loss to the Timbers was in store. Jordan Morris and Nicolas Lodeiro had their own thoughts.

Morris proceeded to draw a penalty kick later in the second half, which Lodeiro buried to snap a three-game losing streak. The Sounders played as though the Rapids’ man advantage didn’t matter whatsoever, with seven shots on goal to the Rapids’ three.

It was a character-building win for the Sounders that gives them the initiative to continue making a recovery. This result came in stark contrast to Lodeiro’s comments after the previous loss to the Fire, in which Lodeiro said the Sounders are “not the same team” that won the Concacaf Champions League.

Toronto FC is another team deserving of the Team of the Week distinction, with four goals and a thoroughly dominant win over Charlotte FC at BMO Field. The New York Red Bulls put in yet another poised showing on the road, winning 4-3 at Austin FC with goals from four Homegrown players in Dru Yearwood, Cameron Harper, Tom Barlow and Serge Ngoma.

Austin FC could not produce a comeback against the Red Bulls Sunday night, but it wasn’t for lack of trying from Austin FC midfielder Sebastian Driussi.

Driussi uncorked a full volley from just outside the box to bring Austin FC its first goal of the night. Driussi kept his team in the match while the Red Bulls found success bursting forward on the counter attack.

Driussi scored another Goal of the Week candidate later in the match, with a strike from 30 yards away to pull Austin one goal away from the Red Bulls.

Bernardeschi provided another Goal of the Week candidate with a powerful shot from long-range to put Toronto FC up 3-0 over Charlotte FC. CF Montreal striker Romell Quioto scored a pair of nice goals, out-hustling D.C. United in the first minute of the game and finishing neatly and chipping Rafael Romo in the 35th minute.