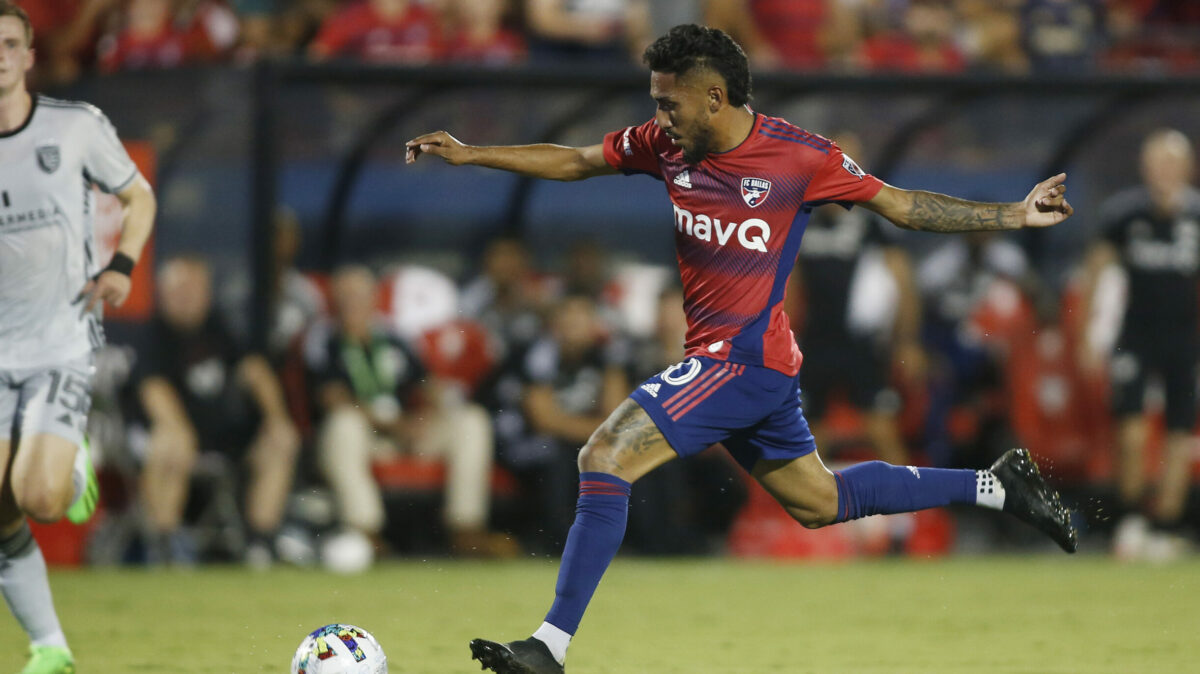 As the World Cup approaches, Jesus Ferreira has found a good time to hit his best form.

The U.S. men’s national team forward scored two more goals this week in a strong showing for FC Dallas. Ferreira’s brace, a dominant night from the Philadelphia Union and a banger of a goal from Thiago Almada headline this week’s Best of MLS.

The Union faced an up-and-coming Chicago Fire side that is gunning for a playoff spot after summer reinforcements and a bump in intensity. However, the Union showed their depth and attacking strength, as four different players scored in a 4-1 win at Subaru Park.

Elsewhere, Lorenzo Insigne scored a beautiful volley to put Toronto FC ahead and on track to a 3-1 home win over the Portland Timbers. Atlanta United midfielder Thiago Almada’s powerful shot into the top right corner is another excellent goal he’s scored in 2022, and stands as one of the best goals this week.

Here is a look back at the Best of MLS for Week 25.

FC Dallas needed a boost, and a 4-1 win over the San Jose Earthquakes was exactly what Nico Estevez wanted to see from Jesus Ferreira, Alan Velasco and new addition Sebastian Lletget.

Ferreira scored two goals, with the first goal coming in the third minute with a simple finish off a pass from Velasco. Ferreira’s awareness and agility showed in his second goal, in which he started the play with a give-and-go with Paul Arriola. Ferreira took a shot, which JT Marcinkowski saved and Ferreira scored the rebound.

FC Dallas has now only lost one of its last five matches, and lies third in the Western Conference. Ferreira is in the Golden Boot hunt with 14 goals, three behind leader Sebastian Driussi.

Honorable mention for Player of the Week goes to Lorenzo Insigne, whose late goal helped Toronto FC continue their mission for a playoff spot. Emanuel Reynoso is another strong candidate this week, with his individual brilliance creating two goals for Minnesota United in an away win over Nashville SC.

The Union’s loss last week to FC Cincinnati showed the Jim Curtin’s side can be beaten, after the Union rattled off five straight wins. The visiting Chicago Fire, brimming with confidence after a positive run of its own, presented a clear challenge to the Union’s Supporters’ Shield hopes.

Consider the Union as strong a contender as ever, with a 4-1 win over the Fire and strong performances all around. Daniel Gazdag opened scoring on a play started by an excellent pass from Mikael Uhre, Jack Elliott capitalized on poor defending from the Fire and Julian Carranza added his ninth goal of the season by chipping Gaga Slonina after a rebounded save.

Honorable mention for Team of the Week goes to Los Angeles FC, which dominated Charlotte FC 5-0, with goals from five different players. FC Dallas saw it all coming together from its top attacking players in a 4-1 win over the Quakes.

Atlanta United continues to fight for the playoffs, and another late result to save a point away from home shows Gonzalo Pineda’s side is not backing down.

A close second for Goal of the Week goes to Lorenzo Insigne, whose volley in the box amid heavy coverage by defenders allowed Toronto FC to go ahead. Insigne celebrated emphatically, showing TFC’s new life since signing Insigne, Federico Bernardeschi and others.