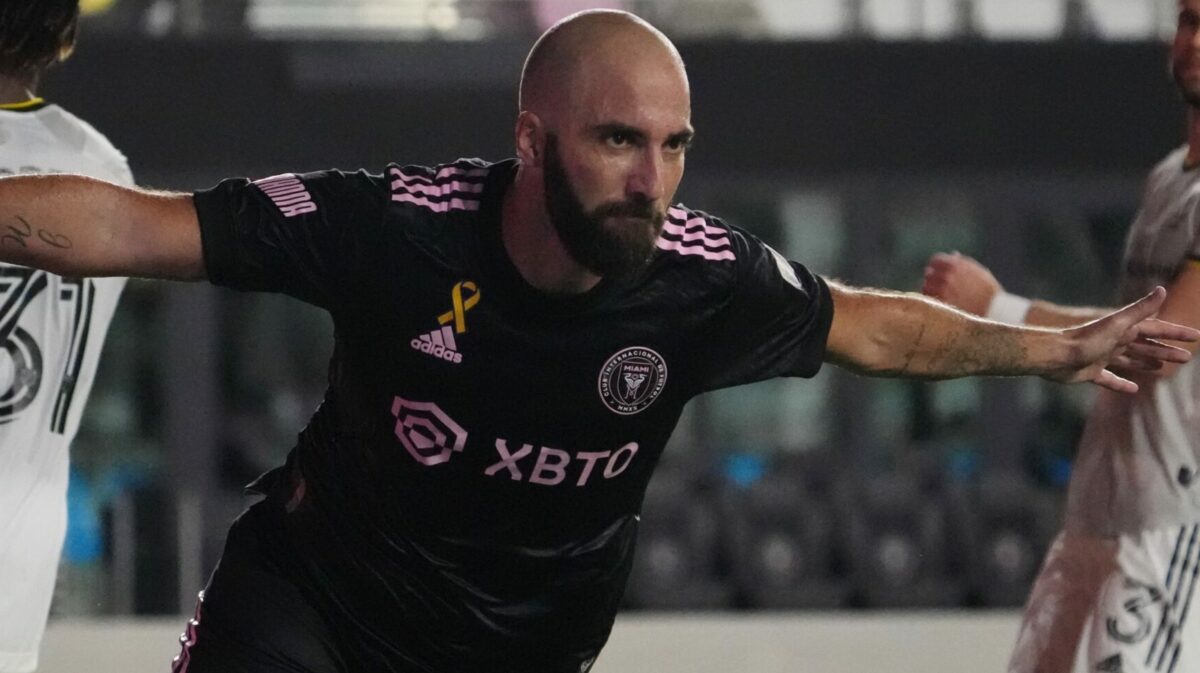 Phil Neville’s Inter Miami used a stoppage-time winner from Gonzalo Higuain to defeat Wayne Rooney’s D.C. United 3-2 at Audi Field. It was a second-consecutive victory for the Herons, which moved into seventh place in the Eastern Conference.

First-half goals from Christian Benteke and Leonardo Campana kicked off events from Audi Field before things continued to get hectic after halftime. Campana’s second goal of the match propelled Inter Miami in front 2-1 before Taxi Fountas equalized for the hosts in the 58th minute.

Higuain’s 12th league goal might be the most important in Inter Miami’s season as the visitors jumped over the Columbus Crew and into the final playoff spot with three weeks to go in the schedule.

LAFC leapfrogged the Philadelphia Union for the top spot in the Supporters’ Shield race, downing the Houston Dynamo 3-1 on home soil. Carlos Vela scored two penalty-kick goals in the first half while Ryan Hollingshead added an insurance tally seven minutes into the second half. Steve Cherundolo’s side holds the tiebreaker right now by holding two more wins than the Union in the standings.

The Portland Timbers also used some late-stage heroics to claim a positive result on Sunday, using a 95th minute equalizer from Santiago Moreno to earn a 1-1 draw at the Columbus Crew. Moreno’s goal helped the Timbers move to fifth place in the Western Conference while the Crew dropped out of the top-seven with three matches to play.

Andre Blake helped the Philadelphia Union clinch a berth into the 2023 Concacaf Champions League after Jim Curtin’s side held on for a scoreless draw with Atlanta United. Blake made five saves at Mercedes-Benz Stadium, moving the Union five points clear of CF Montreal with two matches to go. Despite the fact that CF Montreal could still surpass the Union for the No. 1 seed in the East, the Canadian club could not clinch a CCL berth through the MLS pathway.

Here are the results from Week 31 in MLS.

Man of the Match: Leonardo Campana scored twice for Inter Miami, helping the Herons claim a huge road result and boost themselves back into the East’s top-seven.

Moment of the Match: Higuain’s stoppage-time winner was the dagger blow in Sunday’s defeat for D.C. United, continuing a dismal campaign for Wayne Rooney’s squad.

Match to Forget: David Ochoa’s error didn’t help D.C. United’s cause before the goalkeeper was late on Higuain’s one-time finish at the near post.

Man of the Match: Carlos Vela scored twice from the penalty spot as LAFC stayed alive in the race for the Supporters’ Shield.

Moment of the Match: Ryan Hollingshead has hurt LAFC on a few occasions this season, but the veteran fullback delivered an insurance goal to help in Sunday’s win.

Match to Forget: Griffin Dorsey has taken major strides at right back this season, but he committed one penalty-kick infraction on Sunday as the Dynamo fell down and never recovered in Los Angeles.

Man of the Match: Kevin Molino was the deadliest of all attackers in Sunday’s match at Lower.com Field, scoring the only goal for the Crew, to go along with two won duels and two chances created.

Moment of the Match: Moreno’s last-gasp finish for the Timbers helped Giovanni Savarese’s men walk away with one point and further boost their playoff standing.

Match to Forget: Dairon Asprilla was basically invisible on the field, losing 20 of 26 duels from his forward position. He missed both of his shot attempts and completed just one dribble.

Man of the Match: Santiago Rodriguez set up NYCFC’s opening goal before scoring the second goal of the first half. He also won the most duels and created the most chances.

Moment of the Match: Rodriguez’s goal helped paved the way to an NYCFC victory.

Match to Forget: Lewis Morgan lost seven of eight duels and had the fewest touches of the match.

Man of the Match: Andre Blake was sensational for the Union posting a five-save shutout.

Match to Forget: Julian Carranza lost the most duels for the Union and also did not register a single shot on goal.

Man of the Match: Alistair Johnston scored the decisive goal at Gillette Stadium, but also delivered a strong defensive performance.

Moment of the Match: Johnston’s goal capped off a swift move from CF Montreal, breaking the deadlock from Foxborough.

Match to Forget: Gustavo Bou failed to offer much for the Revolution attack, losing three of five duels and only registering one shot on goal.

Man of the Match: Facundo Torres scored once and came close to scoring twice after hitting the crossbar. Torres also won all five of his duels and completed four dribbles.

Moment of the Match: Lukas MacNaughton’s own goal continued a dominant night for Orlando City and a miserable night for Toronto FC.

Match to Forget: Lukas MacNaughton and Shane O’Neill struggled to deal with the versatile movements of the Orlando City attack.

Man of the Match: Karol Swiderski scored two goals including the stoppage-time winner at Soldier Field.

Match to Forget: Mauricio Pineda might have scored the opening goal in Chicago, but lost all six of his duels and offered little in the passing game for the Fire.

Man of the Match: William Agada scored twice for Sporting KC, helping Peter Vermes’ side finish the season strong, although the team was eliminated from the playoff race due to other results this week.

Match to Forget: The entire Minnesota United back line struggled to deal with Sporting KC’s attack, suffering a poor defeat on the road.

Moment of the Match: Sebastian Driussi’s equalizer helped the hosts fight back to earn a positive home result.

Match to Forget: Sean Davis failed to get on the ball enough for Nashville, losing his only duel of the match.

Man of the Match: Brenner continues to help FC Cincinnati thrive, with two goals as Cincy won in a difficult atmosphere.

Moment of the Match: Roman Celentano’s penalty kick save just before halftime allowed Cincinnati to keep fighting for a result in the second half.

Match to Forget: Zac MacMath should have saved Brenner’s shot on FC Cincinnati’s first goal, in which the ball hit MacMath’s hand before going in.

Man of the Match: Pedro Vite provided plenty of quality in the Whitecaps’ midfield, with a goal and two shots. Vite also made two tackles and won four duels.

Moment of the Match: Julian Gressel hit a sweet volley in the 37th minute, which proved enough for the Whitecaps to take all three points.

Match to Forget: Jordan Morris failed to make a difference for the Sounders, completing only 71% of his passes and taking only one shot.

Moment of the Match: Raheem Edwards sliced up the Rapids defense and knocked in an incredible goal to double the Galaxy’s lead.

Match to Forget: Jonathan Lewis was unable to continue his strong form from previous games. Lewis was subbed out at halftime after a poor performance.

Man of the Match: Jeremy Ebobisse took control of the Quakes’ attack, with five shots and two on goal. He came up big when it counted, converting a penalty kick for his team’s only goal.

Moment of the Match: Jeremy Ebobisse’s converted penalty kick brought the American striker’s goal total in 2022 to 16 and allowed the Quakes to take a point from one of the Western Conference’s top teams.

Match to Forget: FC Dallas missed out on the chance to push for a winner when Paul Arriola was sent off in the 83rd minute.