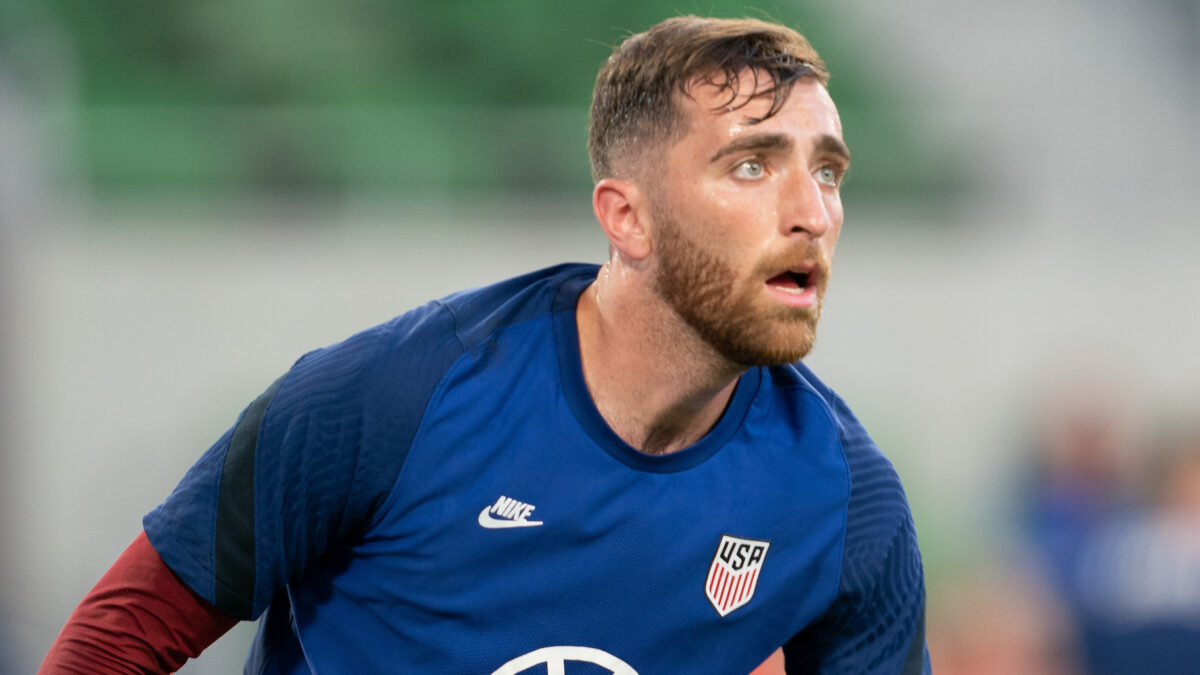 Matt Turner has made just one competitive appearance for Arsenal since his summer transfer from the New England Revolution, but that lack of playing time hasn’t stopped him from benefiting from the move to the English Premier League.

Currently the backup to England national team goalkeeper Aaron Ramsdale at Arsenal, Turner has yet to make an appearance in league play and has been limited to one Europa League appearance. Despite the limited playing time, Turner has made the most of the opportunity to train in a high-level environment, which he believes has helped him sharpen his skills.

“I think my game has come a long way,” Turner said. “Since I began at Arsenal, I’d say the speed and intensity of everything has picked up every single day. Mikel doesn’t accept anything except full gas at training sessions so you have to bring it or you could be found out pretty quickly on the field.

“For me it’s trying to bring the same consistency and be ready for any moment that I am going to be able to play,” Turner added. “Making saves against world class players, sometimes getting found out by those players in training, but it’s all learning. Looking back to when I arrived to now, I am huge, I have changed massively, and I am looking forward to representing the country.”

Turner’s lone start for Arsenal came in a 2-1 UEFA Europa League win over Swiss champions FC Zurich on Sept. 8, as the American made two saves in Switzerland to preserve the group stage win. Although Turner has gone from a No. 1 starter in MLS to a No. 2 option in England, his focus has remained the same since his summer move.

“I don’t know how much you know about me or my story,” Turner said when asked about his sharpness despite only playing one match this season. “That’s not really the kind of way that I operate every single day. I go to training, I’m going to try to get better to try to learn and improve.

“Playing in the Europa League was a nice box to tick,” Turner added. “I felt really, really good about how I did. After the first five minutes, I sort of settled into the game and now it’s about continuing to move forward and focus on these two games here. From there we have 13 games between the end of this break and the World Cup. So busy times ahead.”

Turner’s stock has risen steadily within the USMNT squad since debuting under Berhalter in February of 2021. The Fairfield University product started in all six matches of the USMNT’s Gold Cup-winning run last summer before posting five victories in eight starts during the octagonal round of Concacaf World Cup Qualifying.

Turner also posted two shutouts during the USMNT’s four-match June window earlier this year, before officially move to London prior to Arsenal summer camp. Turner has not only been able to learn from Ramsdale, but he is against plenty of international talents including Bukayo Saka, Gabriel Jesus, Martin Odegaard, and others, a luxury that other goalkeepers in the USMNT pool do not have at this current moment.

Turner heads into the September friendlies expected to be Berhalter’s top choice in goal, with Zack Steffen missing camp after being sidelined by a recent injury. Ethan Horvath and Sean Johnson are also in camp and competing to improve their chances of making the USMNT World Cup squad, but Turner’s success in World Cup qualifying should keep him as Berhalter’s top option in Steffen’s absence.

Although there is little familiarity with both opponents, Turner believes plenty of positives can be taken from the Americans’ final two friendlies of 2022.

“It’s another opportunity for us to get on the field against teams that are going to be playing in the World Cup,” Turner said. “Test ourselves against opponents from a different region that we don’t often play against. That’s the big picture of this, playing World Cup-caliber teams, getting together and creating those bonds still.”