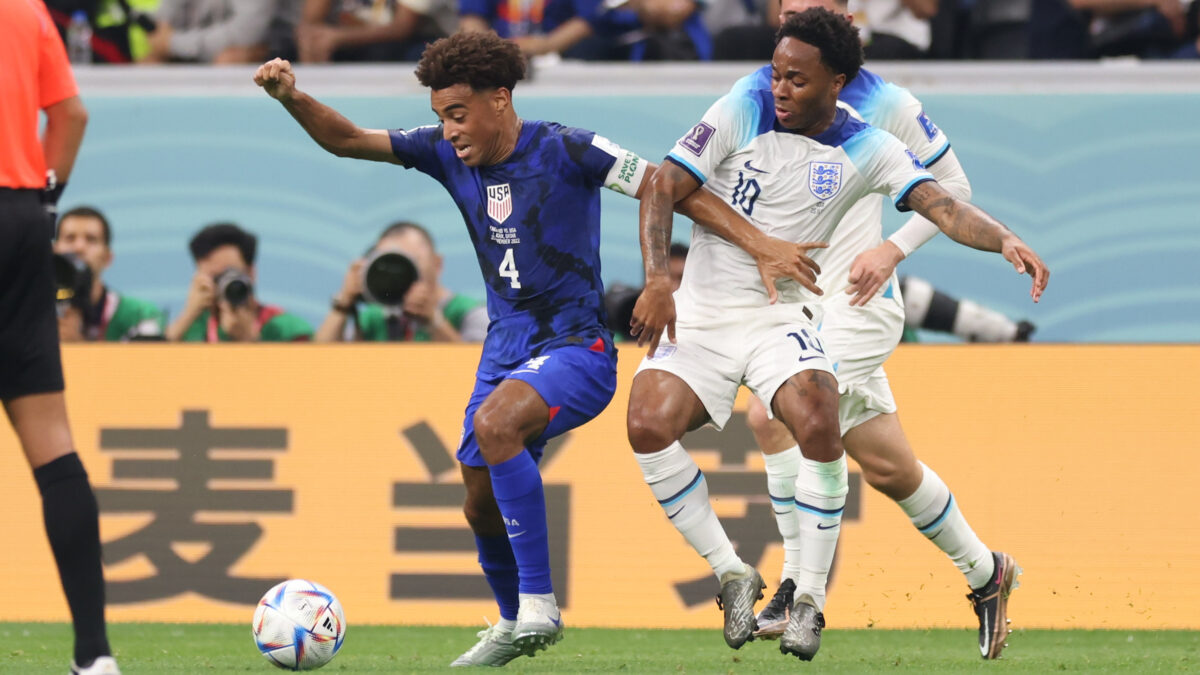 AL KHOR, Qatar — On paper, it was supposed to be a mismatch, but the U.S. men’s national team had no intention of sticking to that script when it took the field against highly-rated England on Friday night.

The Americans weren’t going to be content to just sit back and try holding on for a result, or a close defeat. No, they instead took the game to the English, in a performance that ultimately didn’t yield a victory, but did earn the USMNT a precious point as well as a mountain of respect.

“Tonight didn’t surprise me one bit,” England manager Gareth Southgate said of the USMNT’s performance in the draw. “I knew it’d be a highly-motivated team, they’ve got a lot of players who play in England and they’ve got a coaching staff who have spent time in England. So there was a high level of motivation for the game anyway.

“They way they pressed, the energy, the athleticism, was exactly what I thought, so it was going to be whether we were able to find the solutions tonight to cope with that, counter that, exploit that. We answered most of the questions, but not all of them.”

“I thought it was a really solid performance from the team,” Christian Pulisic said. “Obviously, against a good opponent a draw is not the worst thing, but I felt like there were stretches of the game where we showed dominance and we had a lot of the play, and even created chances and even could have won the game.

“All in all, I thought we managed it quite well. And to come out with a with a draw is a decent result.”

You needed only to scan England’s starting lineup to understand the gravity of the accomplishment that Friday’s 0-0 draw was for the Americans. Stacked with some of the most highly-regarded talent in Europe, the English were expected by some to run circles around a U.S. team that just four days earlier had labored on the way to a draw against Wales.

Instead of caving against the much tougher opponent, the USMNT stepped up its level and gave England all it could handle, outshooting the favorites while also finishing with a higher Expect Goals total.

Any doubts about which team came away looking more impressive on Friday were put to bed at the final whistle, when England fans filled Al Bay Stadium with disapproving whistles while USMNT supporters cheered approvingly.

“There’s a lot of people that obviously thought we’re going to get blown out probably,” Weston McKennie said. “We went into this game, to the outside world obvious underdogs, but for us we didn’t feel like an underdog at all because we know our capability. We know what we can do. We know what talents and and fighting spirit that we have.

“We’re not really afraid of playing against top-tier teams and I think it works in our favor if people think that we’re underdogs going into games because then they might take it lightly,” McKennie said. “I think we we surprise them every time.”

The performance wasn’t without its flaws — the U.S. attack is still struggling to generate clear-cut scoring chances and goals — but given the caliber of opponent and the stakes, Friday’s draw was a performance to be proud of for the Americans.

“Not happy because we didn’t win, how would have definitely preferred three points, but definitely, definitely happy with with the performances of all the guys that played tonight,” USMNT captain Tyler Adams said. “It was that next-man-up mentality. Guys ran and competed until they couldn’t run anymore, and you saw the guys come off the bench and give us that extra energy boost that we needed to continue to play the way we wanted to play.

“Definitely a good performance overall. We can take a lot of positives away from it, but we’ve got to continue to work to get some goals, but it’s good that we’re not giving up many goals.”

The Americans will now move on to Tuesday’s group finale against Iran knowing that a victory will secure their place in the World Cup Round of 16 for the third time in four World Cups. That match will give the USMNT a big opportunity to send a message about just how far the program has come since the rock bottom of failing to qualify for the 2018 World Cup.

Friday’s match with England provided a similar opportunity, and while the Americans fell short of victory, they successfully boosted the level of respect the soccer world has for the USMNT.

“Regarding changing the way the world views American soccer, we’re chipping away at it, and you need games like tonight to be able to do that,” Berhalter said. “Otherwise, it’s hard for people to get a good assessment. And for us, we’re not done. Our focus is to keep going, and hopefully by the end of the tournament, people start to talk about it.”