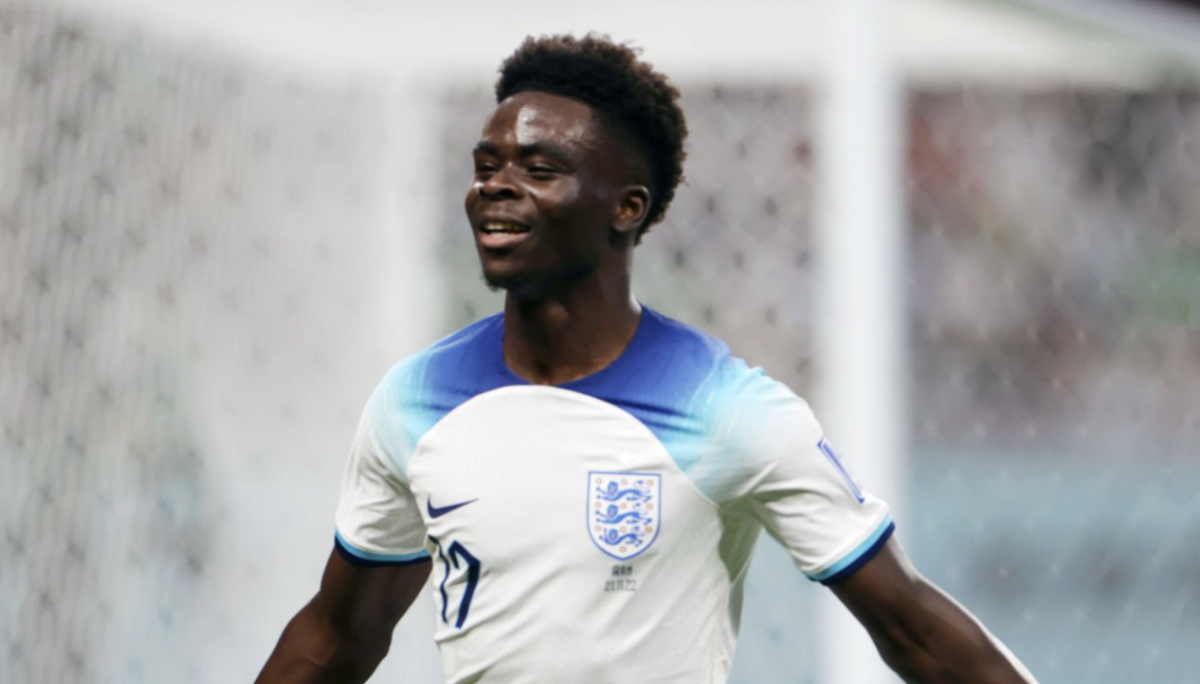 England’s quest to end a lengthy World Cup drought kicked off in style on Monday with Gareth Southgate’s squad claiming an important three points in Group B action.

Bukayo Saka scored twice and four additional England players each added one goal apiece as the Three Lions rolled to a 6-2 Matchday 2 win over Iran at Khalifa International Stadium. Mehdi Taremi scored twice for Iran in the lopsided loss.

Jude Bellingham kickstarted a strong performance from the England attack, looping a header into the back of the net in the 35th minute. Luke Shaw’s cross was redirected towards Iran’s goal by the Borussia Dortmund midfielder, leaving Hossein Hosseini to watch as England celebrated the breakthrough moment.

Bukayo Saka doubled England’s lead in the 43rd minute, blasting home a headed pass from Harry Maguire at the back post. Maguire rose high on a set piece and watched as the Arsenal forward doubled the Three Lions’ lead.

England added a third goal before halftime through the connection between Raheem Sterling and Harry Kane. Kane’s squared pass allowed Sterling to beat Hosseini and give the Three Lions a 3-0 advantage going into the break.

Saka added his second goal of the day in the 62nd minute, benefitting from a deflection to make it 4-0 England.

Taremi pulled a goal back for Iran in the 65th minute after great work from Ali Gholizadeh, but England would added further damage to the Iranian squad.

Marcus Rashford and Jack Grealish both added goals for the Three Lions in the final 20 minutes of the match before Taremi’s late penalty kick capped the final score at 6-2.

England next faces the USMNT on Friday while Iran takes on Wales.

The Netherlands were left frustrated for more than 80 minutes of Monday’s Group A showdown with Senegal, but eventually mustered up two late goals in a 2-0 victory.

Cody Gakpo and Davy Klaassen both scored in a 15-minute period as the Dutch leapfrogged Ecuador into first place. It was also the second shutout in Qatar through the opening five matches of the group stage.

After both teams struggled to test one another in the final third, Netherlands goalkeeper Andries Noppert came up with a clutch save in the 65th minute. Noppert punched away Boulaye Dia’s shot before also denying Idrissa Gueye in the 73rd.

The Dutch finally found the breakthrough goal in the 84th minute through Gakpo’s header at the back post. Frenkie De Jong’s deadly cross allowed the PSV man to beat Nampalys Mendy in a race and hammer home the opening goal.

Davy Klaassen arrived on the spot in the 99th minute to slam the door shot on Senegal’s comeback chances. Memphis Depay’s previous shot was denied by Edouard Mendy, but the veteran midfielder capped off the rebound for the Netherlands’ insurance goal.

Senegal will next face Qatar on Friday while the Netherlands take on Ecuador.