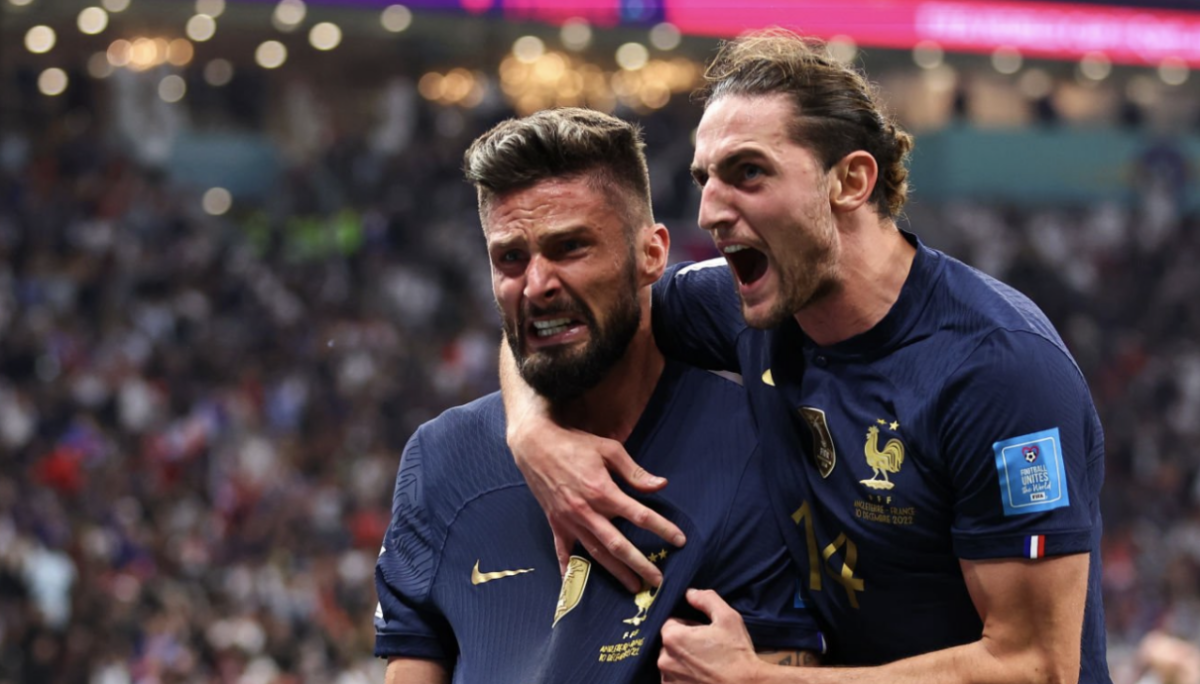 France faced its toughest test yet at the 2022 FIFA World Cup on Saturday against tournament contenders England but kept its dreams of back-to-back titles alive by eliminating the Three Lions in regulation.

Olivier Giroud scored the winning goal for Les Bleus while Harry Kane’s missed penalty kick helped France advance by a 2-1 scoreline. Morocco will oppose Didier Deschamps’ squad in the semifinal round on Wednesday.

France needed only 17 minutes to break the deadlock against the Three Lions with Real Madrid midfielder Aurelien Tchouameni scoring his second international goal. Tchuouameni’s left-footed strike from outside of the box left Jordan Pickford scrambling to his left before watching the shot nestled into the bottom-left corner.

England began to up its pressure as the first half went on as Hugo Lloris made three saves before halftime. Luke Shaw and Harry Kane were denied by the Tottenham veteran keeper before Lloris also repelled Kane’s long-range shot from sneaking in under the crossbar.

Tchouameni gifted England the chance to tie things up early in the second half after the 21-year-old tripped Bukayo Saka in the box. Kane stepped up and beat Lloris to the left side of the net, tying him with Wayne Rooney for the England all-time goalscoring lead.

France responded in a big way though with Giroud playing the hero in the 78th minute. Giroud’s header deflected in off Harry Maguire, giving Les Bleus a 2-1 lead they wouldn’t relinquish.

Kane had a second opportunity to score from the spot in the 84th minute, but his penalty attempt skied into the stands. Theo Hernandez was whistled for pushing Mason Mount over in the box, but Kane could not beat his Tottenham teammate for a second time.

France will meet Morocco on Wednesday with a place in the finals at stake.

Morocco became the first African country to reach the World Cup semifinals on Saturday after defeating Portugal 1-0 for a shock quarterfinals victory.

Youssef En-Nesyri scored the lone goal for Walid Regragui’s side while Yassine Bounou registered a three-save clean sheet for Morocco. It will be Morocco’s first-ever semifinal appearance.

Morocco struck first in the 42nd minute as Yahya Attiat-Allah’s cross hung in the air and En-Nesyri snuck in front of Diogo Costa to head home. It was a breakdown by the Portugal backline, which watched as En-Nesyri celebrated his second goal of the tournament.

Joao Felix was denied for a second time in the match as Morocco continued to hang on defensively. Bounou repelled Felix’s left-footed shot in the 82nd minute before also punching away Cristiano Ronaldo’s half volley in stoppage time.

Morocco held on to knock out Portugal and keep its World Cup dreams alive.