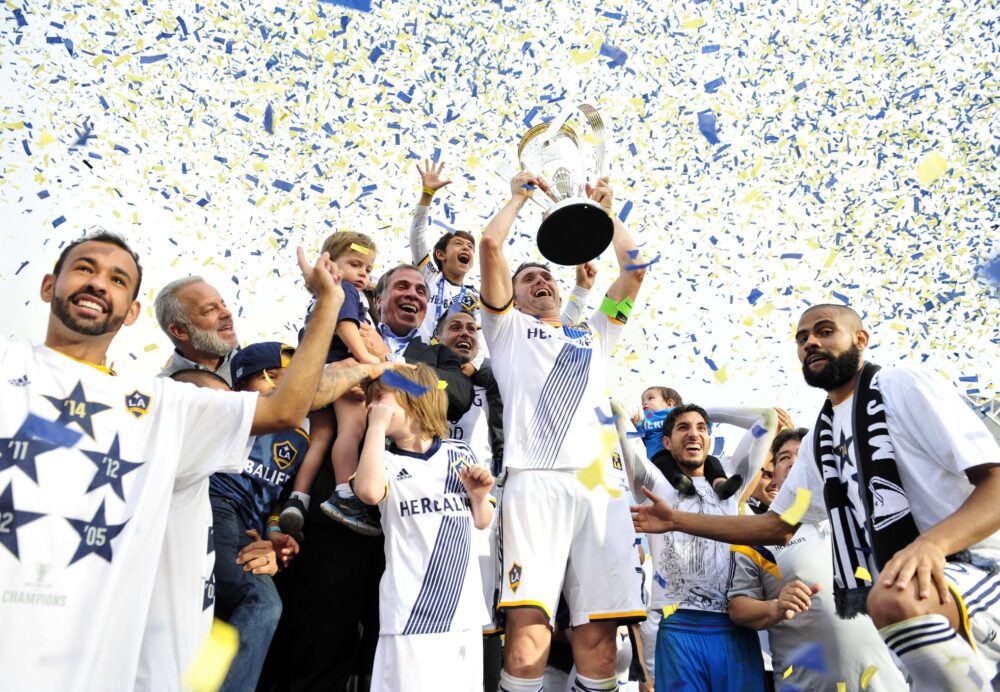 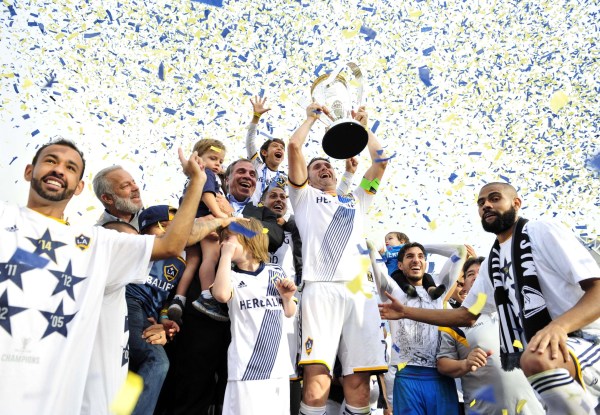 Following lengthy negotiations that threatened to derail the start of the season, Major League Soccer is set to kick off this weekend with the LA Galaxy looking poised to defend their crown.

Despite the loss of Landon Donovan, the Galaxy look to be the frontrunners once again due to the strike partnership of Robbie Keane and Gyasi Zardes. However, with a constantly improving Western Conference nipping at their heels, the Galaxy will have to really work to maintain their status atop the league.

The Seattle Sounders are once again poised to chase the ever-elusive MLS Cup following last season’s double, while the New England Revolution, Columbus Crew, D.C. United and Toronto FC appear to have title aspirations coming out of the East.

Elsewhere, the league has plenty of teams jockeying go take that next step into contention, while newcomers Orlando City and New York City FC will prove to be wild cards heading into their inaugural MLS campaigns.

With so many teams adding pieces from top to bottom, ordering them heading into 2015 was surely a challenge, but here is how the staff at SBI Soccer sees things shaking out this season.

OUTLOOK– Until dethroned, the LA Galaxy remain king. The loss of Landon Donovan will surely be a major detriment, but the attacking duo of Robbie Keane and Gyasi Zardes still strikes fear in every MLS defense. The Steven Gerrard-led cavalry comes during the summer, but the pieces in place currently are more than enough to make the Galaxy a contender for yet another MLS Cup.
————————-

OUTLOOK– After falling just an extra time short of an MLS Cup last season, the Revolution are back, and perhaps even better. The introduction of Juan Agudelo gives the Revs another scoring option in front of Lee Nguyen and Jermaine Jones. With most of the team’s core returning, the Revs look set to make another deep playoff run.
————————

OUTLOOK–  Fresh off of a U.S. Open Cup and Supporters’ Shield-winning campaign, the Sounders remain searching for the team’s first MLS Cup. Clint Dempsey and Obafemi Martins return to lead the forward line, while bulldog Osvaldo Alonso continues to roam the midfield. Although the loss of DeAndre Yedlin will surely leave its mark, the Sounders should rival, and perhaps even surpass, the successes of last season
————————-

OUTLOOK–  The Crew were the darlings of the 2014 season, as Gregg Berhalter’s side made a run through the Eastern Conference en route to a playoff appearance. With the lessons of last season in the back of their mind, a young Crew group, led by the likes of Federico Higuain, Wil Trapp, and Michael Parkhurst, are poised to take the next step this season.
————————-

OUTLOOK–  Another year, another offseason retool for Toronto FC, who look even better on paper than they did last season. The introductions of Sebastian Giovinco and Jozy Altidore have created plenty of headlines, and rightfully so, but the additions of Damien Perquis and Benoit Cheyrou could prove the difference between last season’s top-loaded roster and this season’s balanced out machine.
————————-

OUTLOOK–  Ben Olsen’s side surprised many last season, but few will be surprised by D.C. United this season. With Bill Hamid in net and one of the league’s top defenses back in the fold, D.C. should be strong from the back once again, although the group’s forward unit provides questions to start the season with the absences of Fabian Espindola and Eddie Johnson due to suspension and medical issues, respectively.
————————-

OUTLOOK–  Sporting KC should rebound from the tired legs that plagued them last season, and the introduction of Rogers Espinoza into the midfield will provide a new dynamic in the center of the park. This summer’s Gold Cup will likely weaken the team’s lineup with Espinoza, Matt Besler and Graham Zusi all likely for call-ups, but if Dom Dwyer can continue scoring, SKC should contend again.
————————-

OUTLOOK– RSL enter the 2015 season without some of the club’s most familiar faces. Ned Grabavoy, Chris Wingert and Nat Borchers are all gone, leaving plenty of holes in the RSL roster. One of those holes will be filled by the proven Jamison Olave, but younger guys like Luis Gil will need to step up in 2015.

OUTLOOK–  A mere away goal stood between FC Dallas and advancement last season, and this season’s attack looks just as potent on the back of Rookie of the Year Tesho Akindele. Behind that, however, is where questions lie, as losses in the defense and midfield may hold the team back from being a true contender in the increasingly competitive Western Conference
————————-

OUTLOOK-Last season was a disappointment, meaning this season is likely do-or-die for a Timbers team with plenty of talent. Darlington Nagbe has to be expected to improve upon last season’s frustrating stat line, and Liam Ridgewell should be sharper with a full-season ahead of him. The midfield is questionable, however, especially due to the injury woes of Diego Valeri, who will miss a large chunk of time to start the season.
–————————-

OUTLOOK–  Orlando City’s inaugural voyage has potential to be a fruitful one. With Kaka at the helm of a young group, the team could develop into a quick contender if the team gels properly. That’s a big if, though, as there will certainly be a learning curve for the group’s young core to start their first MLS campaign.

OUTLOOK–  The Whitecaps’ 2014 season ended in heartbreaking fashion, but the team returns a young group with plenty of talent. Pedro Morales is a stud in the midfield and newcomer Octavio Rivero appears to be the forward that the team lacked last season. If Rivero lives up to that monicker, the Whitecaps can be a contender. If not, goals will once again be hard to come by.
————————-

OUTLOOK–  Following an offseason filled with controversy, the 2015 Red Bulls hardly resemble that of last season’s 2014 postseason run. Gone are Thierry Henry, Mike Petke and Tim Cahill, although Sacha Kljestan, Felipe Martins and Jesse Marsch have come in their stead. The pressure is on reigning Golden Boot winner Bradley Wright-Phillips to rival last season’s haul, despite the change in supporting cast around him.
————————-

OUTLOOK–  NYCFC has plenty of stars to lead the way in their inaugural season. David Villa, Frank Lampard and Mix Diskerud will certainly leave their mark in attack and in the midfield, but it is the defense that remains the team’s weakness on paper. With the likelihood of several new additions still coming in this season, NYCFC could feature a whole new look before the stretch run.
————————-

OUTLOOK– The Union sputtered through the first half of 2014 before turning it on late to challenge for a postseason spot. That challenge came up short in heartbreaking fashion, but the Union have made some offseason acquisitions that should contribute from the get-go in C.J. Sapong, Fernando Aristeguieta and Steven Vitoria. Following 2014, pressure lies on goalkeeper Rais M’Bolhi, who will now have a full year to prove his mettle to the Union faithful.
———————–

OUTLOOK– This offseason was one of change for the Dynamo, has longtime head coach Dom Kinnear left the club for the San Jose Earthquakes. His replacement comes in the form of former Premier League manager Owen Coyle, who will have a shiny new striker to work with in July upon the arrival of Erick ‘Cubo’ Torres. The area that needs the most improvement will be defense, which will now see the introduction of Raul Rodríguez  as a positive.
————————-

OUTLOOK– The Chicago Fire set records in 2014, but none that you necessarily want to have. The kings of the draw from last season enter 2015 with a retooled lineup that boasts three new Designated Players in the form of Kennedy Igboananike, David Accam and Shaun Maloney. Things will take time to gel, but the Fire appear to be an improvement from last season’s team.
————————-

OUTLOOK– On the heels of their CONCACAF Champions League efforts, the Montreal Impact have already proven that they have plenty of fight heading into the 2015 season. Ignacio Piatti will look better following a short stint with the team in 2014, although the team will be hampered for both goals and leadership with the departure of Marco Di Vaio.
————————-

OUTLOOK– Dom Kinnear has returned to the place he called home for so long, and returns to a new stadium, but a lot of work to do with a flawed team. The Earthquakes struggled badly to score goals in 2014, and injuries riddled the defense. The team didn’t make a ton of changes to the roster, making a turnaround unlikely, even with the highly regarded Kinnear at the helm.
————————-

OUTLOOK– The Rapids were the worst team in the league over the second half of the season, and Pablo Mastroeni heads into his second season in charge fielding a team that should be better. The question is how much better? Boosting the midfield with the likes of Marcelo Sarvas and Sam Cronin will help, but the Rapids will struggle in the stacked Western Conference.
————————-