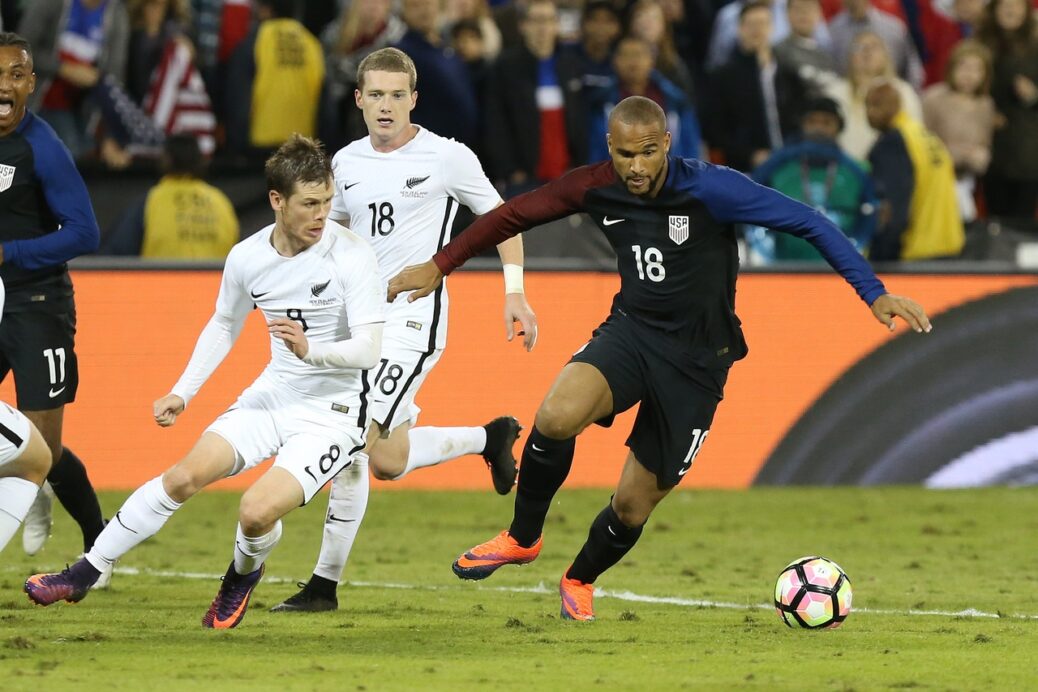 Terrence Boyd’s time at RB Leipzig may be coming to an end and, while it’s still too early to predict his club future, several MLS teams should be on alert due to the forward’s potential availability.

RB Leipzig sporting director Ralf Rangnick revealed that the club is open to selling Boyd in the near future. The forward has yet to truly break into the first team squad following his recent return from a series of injuries, despite recently earning a cameo with the U.S. Men’s National Team in a friendly match against New Zealand. The forward’s contract expires at the end of the season, making a move logical for both the player and a club that has a lineup set as it pushes towards the top of the Bundesliga.

There’s no real indication of where Boyd may land, and MLS may certainly be off the radar for a player that has spent most of his career, and life, in Germany. Boyd may very well be attached to the idea of German soccer or, at the very least, continuing to push through the European ranks.

For MLS clubs, he remains a player full of risk and reward. Several knee injuries deprived Boyd of years of his career, but, when healthy, the forward has proven to be a very solid goalscoring option. The 25-year-old forward scored 28 goals in 59 matches for Austrian side Rapid Wien before scoring in two of his first seven appearances for his current club before injuries hit. When healthy, Boyd is certainly an option for the USMNT, making him a valuable asset both on and off the field.

With that said, here’s a look at several MLS teams that should be interested in Boyd’s services:

The first landing spot is potentially the most logical. The New York Red Bulls share ownership with RB Leipzig, and clubs under the Red Bulls umbrella have certainly worked together in the past. The Red Bulls recently brought in Omer Damari on a loan deal from their German sister club, while Jesse Marsch has frequently scouted all of the clubs throughout the Red Bull network.

On the field, the move makes infinite sense. Behind Bradley Wright-Phillips, the Red Bulls have no consistent goalscoring option, and it showed in the postseason. With no plan B, the Red Bulls failed to get anything going against a stingy Montreal Impact defense that was determined to ice Wright-Phillips and Sacha Kljestan. At worst, Boyd could be that plan B, a player that offers a much different look to Wright-Phillips while utilizing his ability to hold the ball in tight situations. At best, he pushes the Red Bulls to a vicious two-striker set, one that could go toe-to-toe with any defense in MLS.

FC Dallas remains one of MLS’ best teams, but the club is still a forward away from domination. Maxi Urruti is a solid option and Tesho Akindele has proven to be a versatile player atop the field, but the lack of a true No. 9 really harmed FC Dallas heading into the postseason. Desperation saw the club add an aging Carlos ‘Pescadito’ Ruiz for one final run, but it was far from enough to overcome a Seattle Sounders team that blitzed them, 3-0, on the opening leg.

Boyd is certainly a pure No. 9, one that could prove beneficial in FC Dallas’ system. With talented wings on either side of him and Mauro Diaz feeding him, Boyd could certainly thrive within the FC Dallas attack. For a team in “win now” mode, Boyd would certainly be a calculated risk, but one that could help push the club towards an elusive MLS Cup after a two-trophy season.

The Chicago Fire need more than just Boyd, as their 2016 record should indicate. The club is in what feels like a constant state of rebuild and Boyd wouldn’t be enough to push the team towards the postseason. However, Boyd could be a shrewd acquisition for a club in need of a lot of new faces on the attacking end.

David Accam led the Fire with nine goals in 2016, but the club’s attack still lacks a bit of punch. The defense and midfield appear sorted with young options like Matt Polster, Jonathan Campbell and Brandon Vincent, but the club is still lacking a bit of quality on the other end of the field. Veljko Paunovic may utilize his European connections to go in another route, but bringing in a USMNT forward certainly wouldn’t hurt given Boyd’s age and goalscoring ability.

Heading into the 2016 offseason, the Philadelphia Union are in desperate need of a striker. C.J. Sapong scored just two goals after the month of May and, while he wasn’t the sole man responsible for the club’s late-season demise, the lack of goalscoring punch atop the field certainly led to the Union’s post-summer collapse.

Knowing that, the Union should be searching far and wide for a forward option, and Boyd would fit the bill. Boyd would provide a physical option atop the field to aid players like Alejandro Bedoya, Fabian Herbers and Chris Pontius while also finally adding a consistent scorer to the mix.

The two expansion teams both have a lot of roster building to do in the coming weeks, although the forward positions appear fairly set. Atlanta United has their premier forward in Kenwyne Jones, while Minnesota United should certainly lock up Christian Ramirez ahead of their first MLS campaign.

Both sides could certainly benefit from the introduction of Boyd, especially if he has a clean bill of health. However, questions certainly remain in how each side will construct their team going forward. Will Atlanta United lean on South American imports with Gerardo Martino at the helm, and is Boyd too similar to Jones to really make an impact? Would Minnesota United pony up the money to address a position that they seem sound in and what kind of system will they play under their yet-to-be-named coach? It’s tough to say ahead of December’s Expansion Draft, but both sides should certainly take a look.