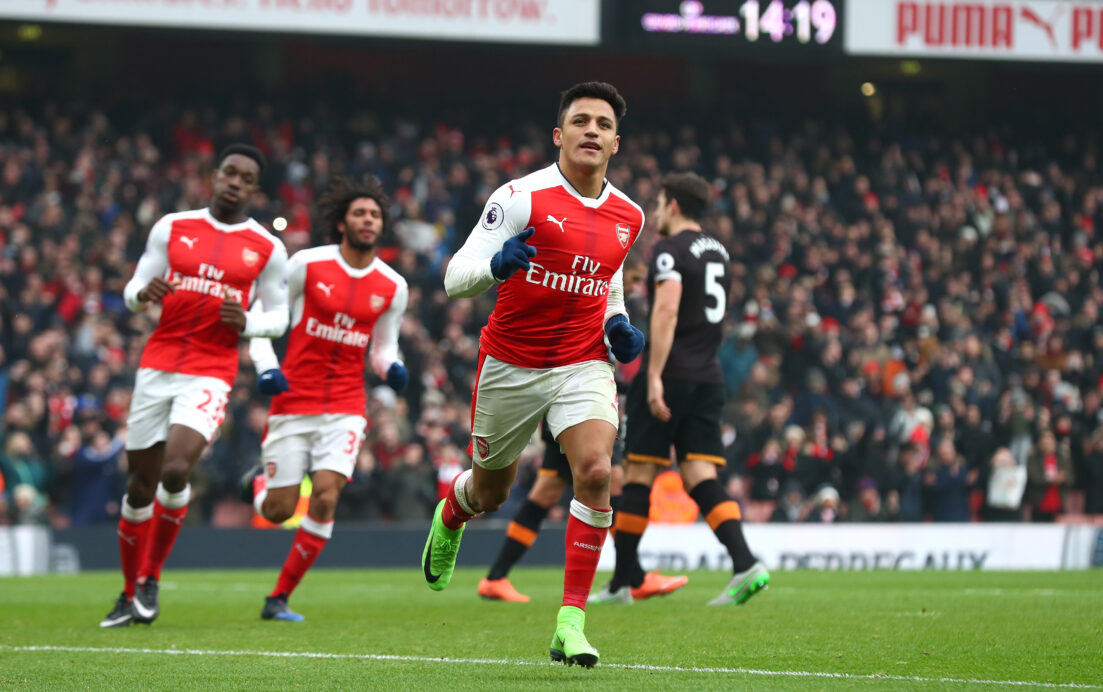 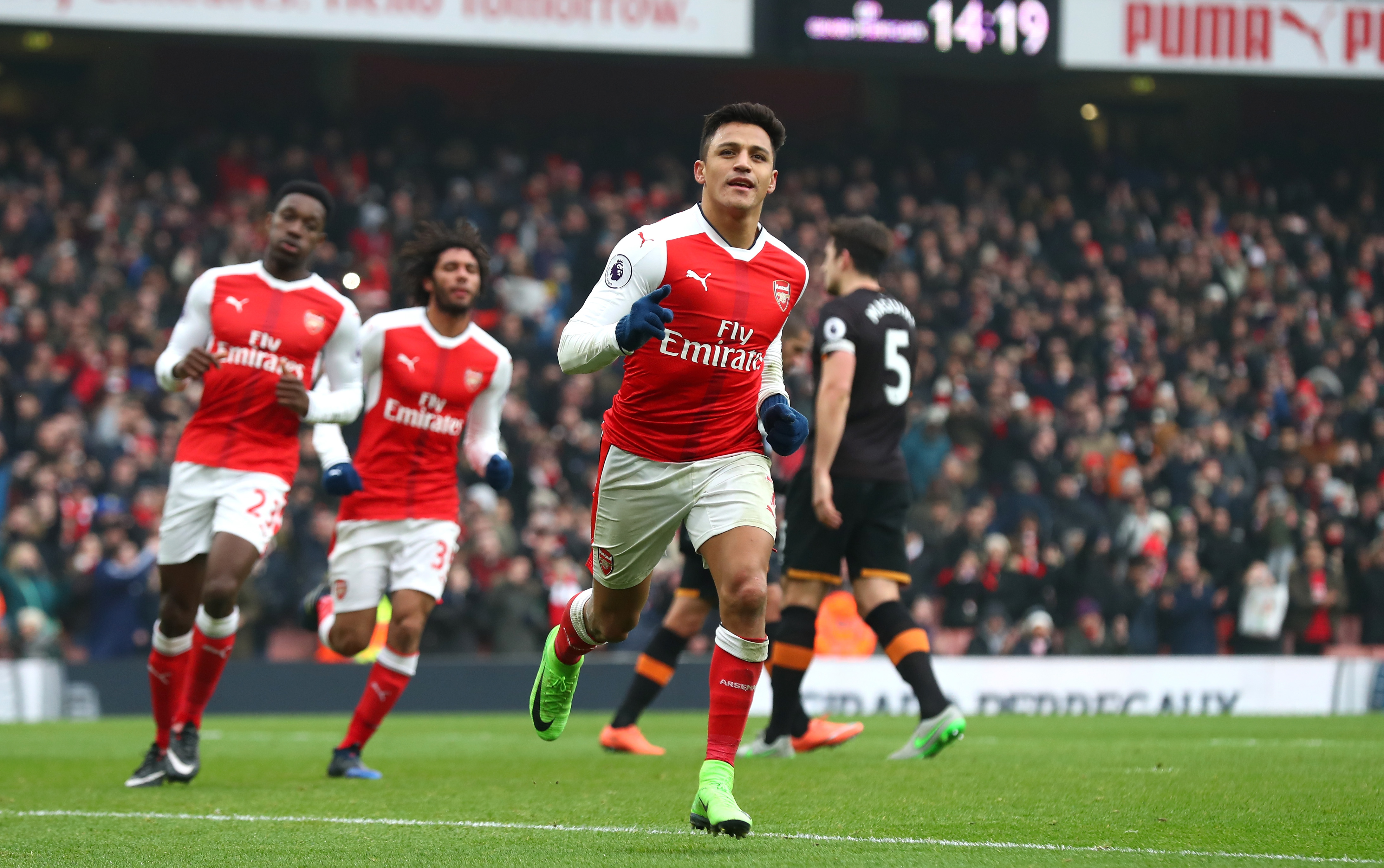 After back-to-back league losses, Arsenal bounced back with a much-needed 2-0 win over Hull City at the Emirates.

Arsene Wenger’s side were aiming to stay in the Premier League title race, and also head into this week’s Champions League tie at Bayern Munich on a positive note. A 93rd minute penalty-kick goal from Alexis Sanchez sealed the win at 2-0. Hull midfielder Sam Clucas was shown a red card for handling the ball in his own box, which allowed Alexis the spot kick chance.

The Chilean netted his side’s opener after 34 minutes when he tapped home his own rebound past Eldin Jakupovic. However it was a controversial goal after the ball went into the net off Sanchez’s raised hand. Hull mustered up four chances on goal, surprisingly holding a slight edge over Arsenal. Jakupovic made five saves in a losing effort, while Arsenal’s Petr Cech made four saves in the clean sheet.

Elsewhere in Europe, Sunderland were drubbed at home after a huge away win a weekend ago. Bayern earned a late win away from home, while Dortmund fell to bottom-half competition in Bundesliga action. In Ligue 1 action, Guingamp defeated Lyon at home in top-table action.

Here is a rundown of Saturday’s action in Europe:

After a horrid start to 2017, Liverpool earned a crucial 2-0 league win after falling down to sixth in the standings in recent weeks. Jurgen Klopp’s side welcomed second place Tottenham Hotspur to Anfield for a mouth-watering meeting between two of England’s top sides.

The return of Sadio Mane proved its worth again as the Senegalese winger netted a first half brace in a two-minute span. The winger rifled home Liverpool’s first in the 16th minute, before scissoring home a second two minutes later. Mane had two later efforts saved by Spurs keeper Hugo Lloris or it could have been worse for the visitors. Mauricio Pochettino’s side failed to muster up much offensively, while Liverpool looked full of energy. This is Tottenham’s first league defeat since a 1-0 defeat at Manchester United on December 11th.

Elsewhere, Southampton drubbed Sunderland at the Stadium of Light 4-0. January signing Manolo Gabbiadini netted a first-half brace to put Saints up 2-0 at halftime. It now gives the Italian three goals in two goals, since signing from Napoli. An own-goal off of Black Cats defender Jason Denayer made it 3-0, before Shane Long added an insurance striker two minutes later.

Manchester United made it 16 straight unbeaten in the league after a 2-0 win over Watford at Old Trafford. Numerous first-half chances saw United on the front foot, before Juan Mata opened the scoring after 32 minutes. Anthony Martial slotted home Zlatan Ibrahimovic’s assist at the hour-mark to give United a 2-0 lead which they wouldn’t relinquish. Watford mustered three chances, but were on the back foot for most of the match.

Middlesbrough and Everton shared the spoils at a rainy Riverside Stadium, in which the hosts had the chance to win it late. Substitute Rudy Gestede saw his 87th minute header saved by Joel Robles and deflect off the crossbar. Toffees winger Ademola Lookman saw his 69th minute effort saved by Victor Valdes. Both Valdes and Robles made three saves a piece in the scoreless draw.

Barcelona earned its 14th league victory of the campaign with a 6-0 thrashing of mid-table host Alaves at Mendizoroza on Saturday. Luis Enrique’s side were up 2-0 thanks to goals from Luis Suarez and Neymar.

Lionel Messi made it 3-0 just before the hour mark for his 17th league strike of the season. An own-goal off of Alaves defender Alexis made it 4-0 in the 63rd before Barca added two insurance goals. Ivan Rakitic finished off Suarez’s assist two minutes later, before Suarez netted his second of the day from close range.

The win had put the reigning champs in top spot prior to Real Madrid’s 3-1 win at Osasuna later on Saturday. Real Madrid jumped back into first place with the victory, while also still holding two games in hand on second-place Barcelona.

Real Betis and Valencia each earned a point in a scoreless draw in the early fixture, while Athletic Bilbao fought back for a 2-1 win against visiting Deportivo at San Memes. A 89th minute winner by Aritz Adruiz sealed the win for the hosts.

After back-to-back league defeats, Bayer Leverkusen bounced back with a 3-0 win over Eintracht Frankfurt. Kevin Volland’s 78th minute goal capped a perfect day for the hosts which moved them up to eighth place.

Mexican international Javier Hernandez had the hosts up 1-0 after rifling home after five minutes.  Hernandez duplicated his earlier tally with a similar striker in the 63rd minute, before Volland added an insurance goal. Hernandez now has eight league goals this season, and will be a key figure if Leverkusen want to make a run for a European place.

Meanwhile, bottom place SV Darmstadt shocked the Bundesliga world with a 2-1 win over fourth place Borussia Dortmund. American striker Terrance Boyd netted with a left-footed strike after 21 minutes to put the hosts up 1-0. Dortmund midfielder Raphael Guerreiro equalized for Thomas Tuchel’s side just before halftime which a left-footed effort of his own.

However, the winner for Darmstadt came in the 67th minute as substitute Antonio-Mirko Colak rifled home Sidney Sam’s assist which made it 2-1. Darmstadt sit four points from safety, but this result should do wonders for their confidence. American international Christian Pulisic started and played in the entire match for Dortmund.

Here are today’s results from Germany:

In the only Serie A fixture of the day, Fiorentina defeated Udinese, 3-0, at the Artemio Franchi Stadium. Borja Valero’s first league goal of the season, 41 minutes in had the hosts up at halftime. Khouma Babacar made it 2-0 from outside the box in the 62nd minute, before Federico Bernadeschi added an insurance goal from the penalty spot. Udinese’s Seko Fofana was whistled for handball and given a yellow card. It was a great result for the hosts after falling 4-0 midweek to Roma.

After sixth matches without a league win, Guingamp fought back for a 2-1 win over visiting Lyon.

Alexandre Lacazette netted his 20th league goal of the season after 10 minutes to put Lyon up 1-0. Moustapha Diallo equalized for the hosts in the 30th minute, before Nicolas Benezet headed Guingamp in front four minutes later.

Those would be the hosts only two efforts on goal in the match, while Lyon out-possessed and shot them. Karl Johnsson made four saves for Guingamp in the win, which sees them go to eighth. Lyon remain in fourth, but are now 12 points behind Nice for the final Champions League qualification spot.

Meanwhile, league leaders Monaco blew by Metz 5-0 at the Stade Louis II thanks to a hat-trick from 18-year-old Kylian Mbappe-Lottin. Radamel Falcao also added a brace to bring his league total of goals to 14. The winners now sit three points ahead of PSG.

Here are the Ligue 1 results from Saturday: