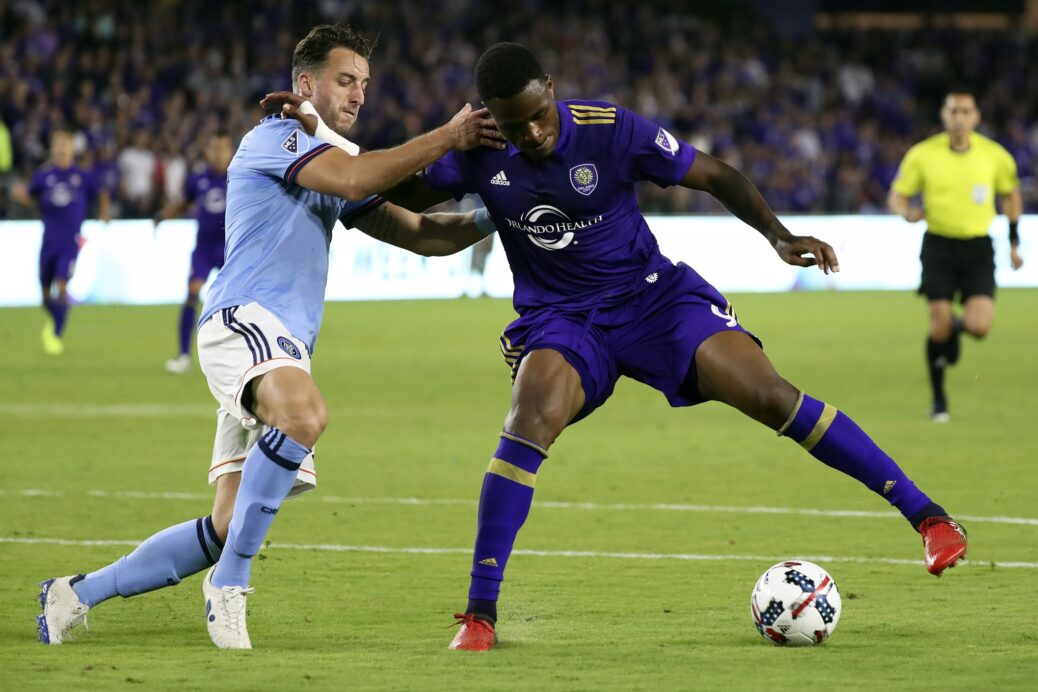 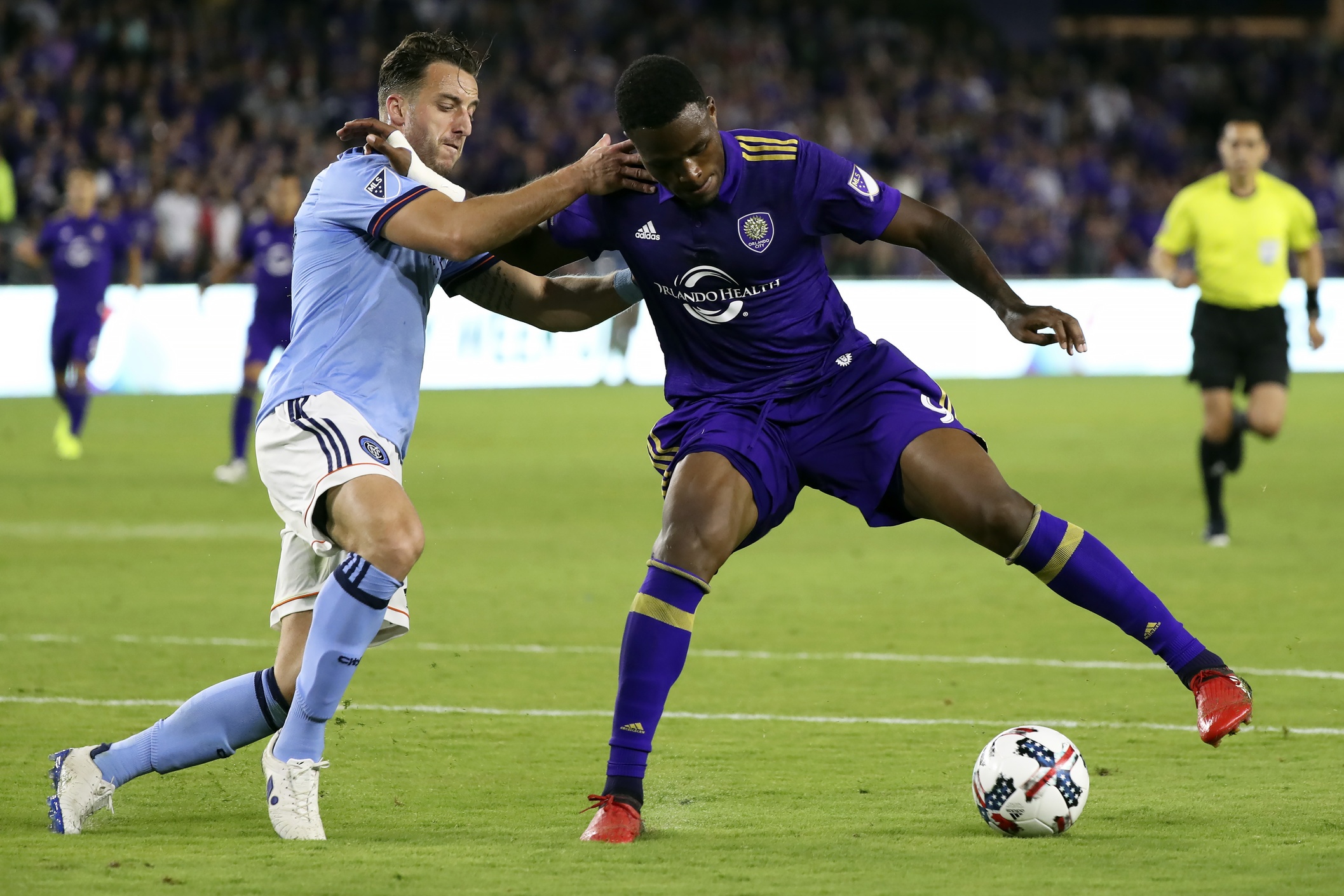 When the league MVP crumples into a ball while grabbing his ankle in severe pain it can bring practice to a halt.  While his New York City FC teammates stood silent and motionless while in the midst of an energized training exercise, David Villa was unable to get up. Eventually, he rose with the assistance of a trainer, limping heavily. Play resumed and ultimately Villa was pressing, sprinting and scoring goals again. There was a shared sense of liberation – the captain is okay.

Moments later, the valuable left back Ronald Matarrita slumped to the grass pitch following a collision with Jack Harrison – only this time, Matarrita was unable to regain his feet. The Costa Rican international was placed in an air cast and carted from the pitch with a severe left ankle sprain. The club announced that he will miss four-to-six weeks.

The injury is a big blow for NYCFC, but head coach Patrick Vieira’s potential plan to use a 3-4-3 against Orlando City could soften the blow, at least this weekend.

Vieira hinted that he was considering a three-back system against Orlando City even before Mataritta’s injury, in order to deal with Lions striker Cyle Larin.

“We just have to be tight on (Larin) when the ball is wide,” said Vieira. “Playing three at the back will help stop them to create chances because everything they do is central.”

Vieira has several options should he choose the 3-4-3 shape that proved to be a detriment in a road loss to D.C. United.  Frederic Brillant, making initial start this season, played on the right side against United and his misplay led to a gift goal for Lloyd Sam. Andrea Pirlo later admitted that the team was not yet comfortable with the system and Vieira assured that the details would be corrected in training and promised that the 3-4-3 would be seen again.

Maxime Chanot in the middle and Alexander Callens to the left are secure in a back-three set-up. Ethan White is the likely candidate to fill the slot on the right. White has started three of the last four matches at right back although in a 4-3-3 system. Perhaps R.J. Allen will be promoted from purgatory. Allen started the season opener at Orlando City and has not made the team’s 18-man match day roster since.

Excluding the match in the nation’s capital, NYCFC has utilized a 4-3-3 in all other matches, including the 2017 debut in Orlando. Though Orlando City won the opener, 1-0, on the strength of a Larin goal, NYCFC was dominant in possession and chances created.

14-year-old Giovanni Reyna drew a penalty, then finished the spot kick to lead the NYCFC U-16 Development Academy side over Tigres for the Premier Division title at the recent Generation adidas Cup.

Reyna, son of NYCFC Sporting Director and U.S. Men’s National Team legend Claudio was the youngest player on the youngest team in the Premier Division of the event, which was the second tier at the Generation adidas Cup, with the Champions Division being the first tier.

“First of all I’m his dad and always will be,” said Claudio Reyna. “He loves to play, loves going to training, loves being with his teammates.”

The elder Reyna, who captained the 2006 USMNT World Cup team and earned 112 caps, talks to his son more about habits than anything specific on the field.

“He knows what I can get upset about,” said Reyna. “It’s not what he does on the field but more about his habits and attitude. He’s getting the message.”

“The thing I like about him is that he has an eye for the goal, he’s a goal scorer,” said Vieira. “I don’t want to put too much pressure on him but he reminds me a little of David Trezeguet.”

Vieira’s teammate at Juventus and the French National Team, Trezeguet compiled 261 goals for club and country.

“Having them play up – it’s the philosophy of the club,” said Reyna. “They are getting pushed and put in situations that are not comfortable.”

Several of the U-16’s were invited to train with the senior team to help with an 11-a-side intra-squad scrimmage during the international break.

“The level was very good,” said Vieira. “They really surprised me.”

“They fit in well and the level in training did not drop,” said Reyna. “I’m not sure I would have been able to train with men like that.”

Looking at a larger image as he considered the talent within his academy and others around the country, the former Technical Director for U.S. Soccer says that the talent of players in the states should create significant results for the USMNT – now.

“We are ready to compete now,” said Reyna. “Our mentality has to change. As a nation, we’re always talking about the future. The senior team can compete with anybody – it’s the belief and mentality that needs to change.”

The MLS “Not” Goal of the Week

Perhaps the greatest upset in MLS history occurred on the internet. David Villa’s 53-yard strike that drifted over the head of Andre Blake to seal NYCFC’s win at Philadelphia finished second in a fan vote for MLS Goal of the Week.

Regardless, NYCFC goalkeeper Sean Johnson sensed Blake was in trouble from the outset.

As for Villa, he said he plans for the moments when the keeper strays off his line.

“In training, I always try to practice it,” said Villa. “Even if you don’t score, if you try it makes the goalie a little afraid.”

Keepers throughout the league beware.

“I hope to score three or four more of those in my career,” said Villa.

In the second half of the 2-0 win over the Union, stay-at-home fullback Ethan White made a well-timed run into the penalty area, unleashing a shot that Blake easily handled.  The attempt had the look of a player unaccustomed to the finished product.

“My eyes got really big,” said White with a laugh. “I’m glad we got the win and it didn’t come down to my shot.”

“He nearly scored – I was surprised,” said Vieira. “He was surprised himself. It’s just about confidence. He’s in a really good period at the moment.”

White remained after training for an extra 10 minutes to polish up his finishing skills.