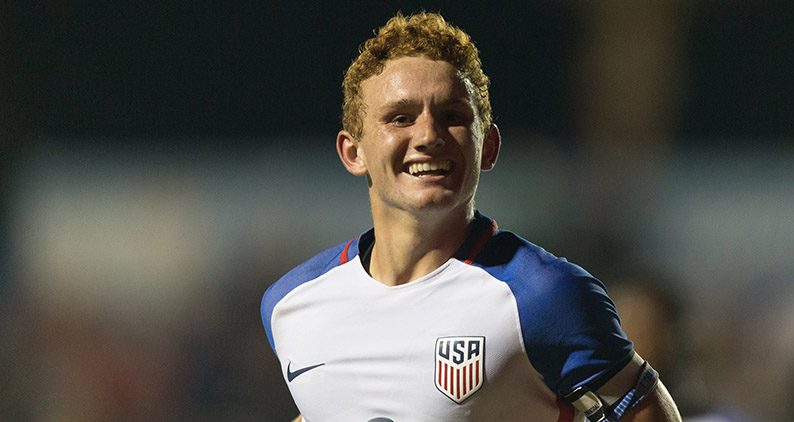 Josh Sargent proved to be a special prospect throughout the first few months of 2017. He dominated the U-17 level with the U.S. Under-17 Men’s National Team, leading that group to a World Cup berth. He then proceeded to standout at the U-20 level at that World Cup, routinely outplaying opposition several years older than he is.

Now, still a few months before his 18th birthday, Sargent has decided where to begin his professional career. Sargent will sign with German Bundesliga side Werder Bremen in February, where he will be hoping to make the jump from special prospect to special player.

Sargent’s future became a bit clearer on Tuesday with his announcement that he’ll head to the Bundesliga club. It’s been a move that’s been long-rumored, but won’t be official until he turns 18.

“It’s been very fun,” Sargent said. “From the very start, ever since I’ve been in St.Louis, my coaching staff and parents have been very supportive of what I’m doing and I’m very excited to be able to sign with a team like Bremen in the near future.

“It’s been very fun, traveling around the world, looking at different clubs and in the end I think it was just that gut feeling that Bremen felt like home and I feel like they are going to be a great fit for me.”

According to Tim Steidten, the head of squad planning and scouting at Werder Bremen, the 17-year-old forward could already be on the fast track to the first team. Sargent will immediately join with the club’s U-23s when he makes the move in the winter, and Steidten also added that he expects Sargent to train with the first team in the summer.

The timeline is a fast one, even for a player of Sargent’s caliber, but the Bundesliga has proven a good landing spot for many Americans over the years. From stars of yesteryear like Steve Cherundolo to modern prodigies like Christian Pulisic and Weston McKennie, the German league has never shied away from developing American prospects.

Sargent might just get his chance. Even at his age, Sargent is physically strong and has a nose for goal, as evidenced by his five goals in U-17 qualifying and four more at the U-20 World Cup. The Bundesliga will be a different animal entirely, but Sargent does see a pathway to where he needs to be.

“What drew me to the Bundesliga and Werder specifically is, you can start to see young Americans starting to get minutes and capitalizing on those minutes,” Sargent said, “and I’m hoping I can do the same thing.”

Before that begins, though, Sargent faces one more international tournament. He’ll be the centerpiece for the U.S. as he returns to the U-17s for the upcoming U-17 World Cup, which kicks off in India on Oct. 6.

He’ll lead a talented roster that includes players like Atlanta United playmaker Andrew Carleton, NYCFC defender James Sands and fellow goalscorer Ayo Akinola. Sargent is no doubt the focal point, though, and any run from the U.S. will require Sargent to continue to play at a high level.

The Bundesliga awaits, but first, Sargent is looking for one more big performance beginning his professional career.

“I had the privilege of playing in the U-20 World Cup with the National Team already and I know just how much grit and hard work it takes,” Sargent said. “I’m hoping to bring that back to this team and influence the team to the best of my ability.

“This announcement only makes me more excited and more motivated to show Bremen what I can bring to the club going into the U-17 World Cup.”