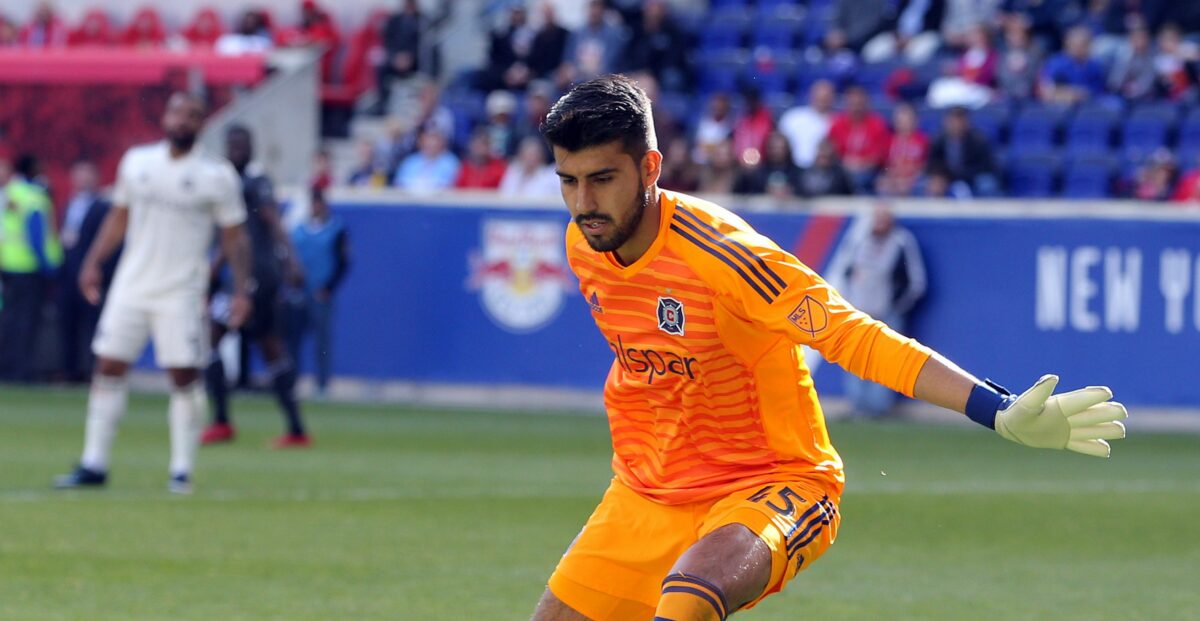 For several years, a trip to Red Bull Arena has meant defensive tests for visiting teams against a home side that frequently finds ways to score goals and pick up wins. This was almost the case once again on Saturday, when the Chicago Fire visited the home of the New York Red Bulls, but with a twist.

Their goal may have been threatened over and over, but they were the first team in MLS this season to escape New Jersey with three points after a 2-1 victory.

Much of it was thanks to the Fire’s latest first choice goalkeeper, Richard Sanchez, who recorded nine saves as the Red Bulls, per the usual, attacked his goal. The saves were sometimes simple and other times spectacular, impressing his teammates and the crowd equally.

“He was very helpful for us,” Bastian Schweinsteiger said after the match. “He came out of the goal, saved balls. [The performance was] very good from him today.”

It has hardly been an easy road for Sanchez, who struggled for minutes last year with the Fire, but the goalkeeper is currently in very good standing.

It showed on the field, not just against the Red Bulls, but in his most recent string of matches. Midfielder Dax McCarty felt that Saturday’s match, grouped with the Fire’s last two against the LA Galaxy and the Columbus Crew have been his best games for the Fire. He collected a clean sheet against the Crew, his first for the club, and only conceded once each to the Galaxy and the Red Bulls.

Veljko Paunovic has also not had it easy in the year and change since goalkeeper Sean Johnson left for New York City FC, rotating through a few, but having now settled on Sanchez. The head coach admitted that he has seen the 24-year-old’s growth after only eight total matches with the Fire.

“It’s very important, the position of the goalkeeper,” Paunovic said. “It’s something that gives the team confidence. It gives security at the back line, and, you know, just the organization. As he is growing, the team is getting better, too. It goes together.”

Sanchez, too, has noticed his own development. The biggest change he has seen in his own game is how he watches the action in front of him.

“Just reading the game better,” he said, “I feel like that’s what I’ve most improved on.”

He admitted, though, that it is all still a work in progress.

“There are still some details there that I need to polish up on,” he said, stressing the need to read certain situations better. “Every match has different scenarios and different ways to solve those… With the time going on, I know I will be able to recognize that and to be able to solve those situations and help my team.”

Sanchez’s performance also addresses a larger strategy of the Fire as they attempted to keep the Red Bulls at bay. Battling with one of the league’s strongest offensive units is no easy task, as their multi-goal league wins over the Montreal Impact, Minnesota United, and the Portland Timbers will indicate. As McCarty notes, defense is the key to performing well against them.

“(We) wanted t o make sure we weren’t giving them anything easy so I thought it was a great performance from the backline today, obviously Richard Sanchez made some huge saves so it’s a really, really important game.”

It’s a result that gives the Fire a big boost after a rough start to their season, recording only their second win in six matches. There may still be a few kinks to work out, but in the meantime, members of the team were unafraid to shower some praise on their standout goalkeeper.

“I hope he is going to be in the MLS Team of the Week,” Schweinsteiger said, “because he deserves it.”