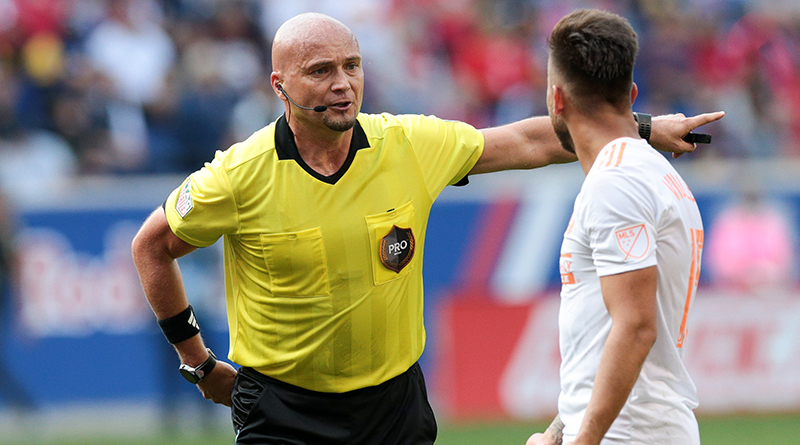 On Tuesday, PRO announced that the two groups reached a deal for a new collective bargaining agreement which will run through January 2024. PRO is known for identifying talent, training, assessing, and assigning referees in the U.S. and Canadian pro soccer leagues such as MLS, USL, and NWSL.

🤝 // #PRO and the Professional Soccer Referees Association are pleased to announce the ratification of a new Collective Bargaining Agreement that will run through January 2024.

“After 10 months of hard work by both parties, we are very pleased to have a new collective bargaining agreement in place as we enter the 2019 season,” PRO general manager Howard Webb said in a statement. “We want to thank the membership of the match official bargaining unit, which as ratified this agreement. We consider the new CBA to be a fair deal for all, which will assist in our collective efforts to grow and develop the refereeing landscape in professional soccer.”

However, PSRA members voted down a previous tentative CBA deal in January before the new agreement was completed on Tuesday.

“I’d like to thank PRO and their team, as well as PSRA’s negotiating committee and our legal counsel, for working so diligently in putting together a new CBA that will serve as the framework of working conditions for our bargaining unit of MLS officials for the next five years,” PSRA president Steve Taylor said.

The rich continued to get richer on Tuesday with defending MLS champs Atlanta United making a key signing.

“We’re pleased to officially welcome Florentin to our club,” Atlanta United VP and Technical Director Carlos Bocanegra said. “He’s a physical center back who also has the ability to play with his feet. He also brings an immense amount of experience after representing his club and country in various international tournaments and we expect him to compete for playing time on our backline.”

A Guinean-born Frenchman, Pogba began his professional career with CS Sedan in Ligue 2. After two seasons with the club, Pogba moved to St. Etienne where he totaled 99 appearances in five seasons.

A familiar face is on his way back to the Columbus Crew for the 2019 season.

The Crew announced on Tuesday they acquired veteran defender Waylon Francis in a trade with the Seattle Sounders. In exchange for Francis, Columbus sent Seattle $50,000 in General Allocation Money.

Francis will be entering his sixth MLS season and previously played with the Crew from 2014-17. In his MLS career, Francis has made 94 regular-season appearances while recording 19 assists.

“We are pleased to welcome Waylon back to the club,” Crew SC President Tim Bezbatchenko said. “In Waylon, we gain a talented, MLS veteran who adds strong versatility and who knows what it takes to compete in his League as well at the National Team level. His familiarity with the organization will be beneficial as we reincorporate him back into this roster and we look forward to his contributions as we prepare for the upcoming season.”

2018 saw Francis made 11 regular-season appearances for the Sounders. He has also won six caps with the Costa Rica Men’s National Team, most recently playing against the USMNT in last Saturday’s 2-0 friendly defeat.

Sporting KC added depth to its backline on Tuesday with the signing of a young centerback.

The club announced it signed Abdul Rwatubaye to a one-year contract, with options for 2020, 2021, and 2022. Rwatubaye, 22, will occupy an international roster spot.

A native of Rwanda, Rwatubaye spent the last three seasons with Rayon Sports FC of the Rwandan top-flight. In his six years total as a professional, Rwatubaye has lifted three first-division titles and made 22 appearances for the Rwandan National Team.

During his career, Rwatubaye has also spent time with APR FC and Isonga FC while appearing in the CAF Champions League and the CAF Confederation Cup.

With Ike Opara being traded to Minnesota United, Rwatubaye could very well fight for a starting spot in Peter Vermes’ team.

After being linked with the club over the weekend, Zachary Brault-Guillard is on his way to the Montreal Impact.

The club announced Tuesday they’ve acquired Brault-Guillard on-loan for the 2019 season from Olympique Lyon. Brault-Guillard, 20, has yet to make his debut for Lyon’s senior team but has made 33 appearances since 2016 for Lyon B. He served as team captain since Aug. 2018 for Lyon B, who play in the Championat National 2 division.

A Haitian-born Canadian, Brault-Guillard has also won two caps for the Canadian National Team after working his way through the youth teams.

“Zachary will reinforce the Impact’s defensive unit. He’s a young Franco-Quebecois who grew up humanly and sporting within Olympique Lyonnais’ youth teams.,” Impact head coach Remi Garde said. “He’s a defensive full-back who has potential to progress through daily contact with the Impact’s other professional players. I would like to welcome him to the club.”