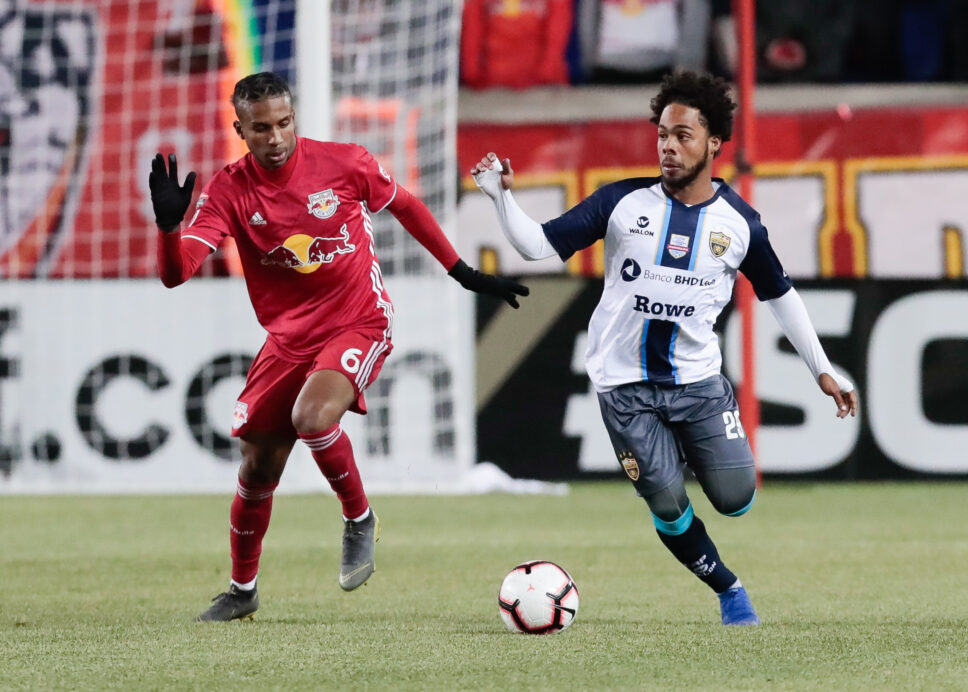 HARRISON, N.J. —A “needless” yellow card has left the New York Red Bulls without their starting right back for what could be one of their toughest matches of the year, and in his place will likely be a player that is high on potential but low on professional experience. Very low.

The Red Bulls will begin their Concacaf Champions League quarterfinals series vs. Liga MX side Santos Laguna at home on Tuesday night, but will not be at full strength when the opening whistle blows. Right fullback Michael Amir Murillo is suspended for the match due to yellow card accumulation, and all signs point to youngster Kyle Duncan, who started in that spot over the weekend, replacing him.

While inserting Duncan would be a like-for-like move in the general sense, the Red Bulls would lose some of the overlapping threat and physicality that Murillo provides. They would, however, gain some more speed and energy down the right flank, and that could help in applying their touted high press so that Santos Laguna’s most dangerous players never feel comfortable.

“He has different qualities,” said Armas last week of Duncan. “He can defend 1-v-1 in a certain way, his engine to get up and down, he’s good in the air, he tactically understands. … He’s fearless and he’s a breath of fresh air when he’s out there. He flies around the field and he likes playing so he fits in many ways.”

The Red Bulls will need all of that fearlessness and then some if they wish to get past Santos Laguna, who are very likely to target the 21-year-old Duncan with Julio Furch and Eduar Preciado in the first leg given the American’s inexperience. Duncan has only played six professional games, totaling 455 minutes, to date.

He likely would have had more, but a 2018 rookie campaign that started so brightly was derailed by a torn right ACL. Duncan returned to action in his first competitive game in last Wednesday’s 3-0 win vs. Atletico Pantoja, replacing Murillo in the 59th minute not long after the Panamanian was cautioned.

“It was pretty emotional but I had the motivation of my players, my family, also the fans, the staff,” said Duncan last week. “I felt like I had something to prove so went back out there and played my game and I think I did well.”

Last week’s substitute appearance, and his 64-minute appearance on Saturday in the MLS season opener vs. the Columbus Crew, will be good preparation for Duncan if he plays on Tuesday. Furch, the left forward, and Preciado, the left winger, are two of Santos’ key men, boasting cleverness, quickness, and technical ability.

They are players that will have to be nullified in order for the Red Bulls to have a shot at not only winning the first leg but at advancing to the Champions League semifinals. It is a tall task that will fall on the entire defense, including Duncan should he get the nod as is expected.

“He’ll be a consideration for sure,” said Armas. “We have a few options and a few different ways we can play to fill that void, but we like Kyle and it hurt us last year when he got hurt because he was off to a great start. He worked hard to get back and here he is and had a great preseason.”

For Duncan, the match would be the biggest and likely the toughest of his fledgling career to date. He believes he can deliver, though, and his teammates are equally as confident in him.

“He was great last year for us before he got injured so we know how good of a player he is,” said midfielder Sean Davis. “He’s a guy that’s hungry and wants to prove himself so he’s going to get a big chance and we’re happy for him.”