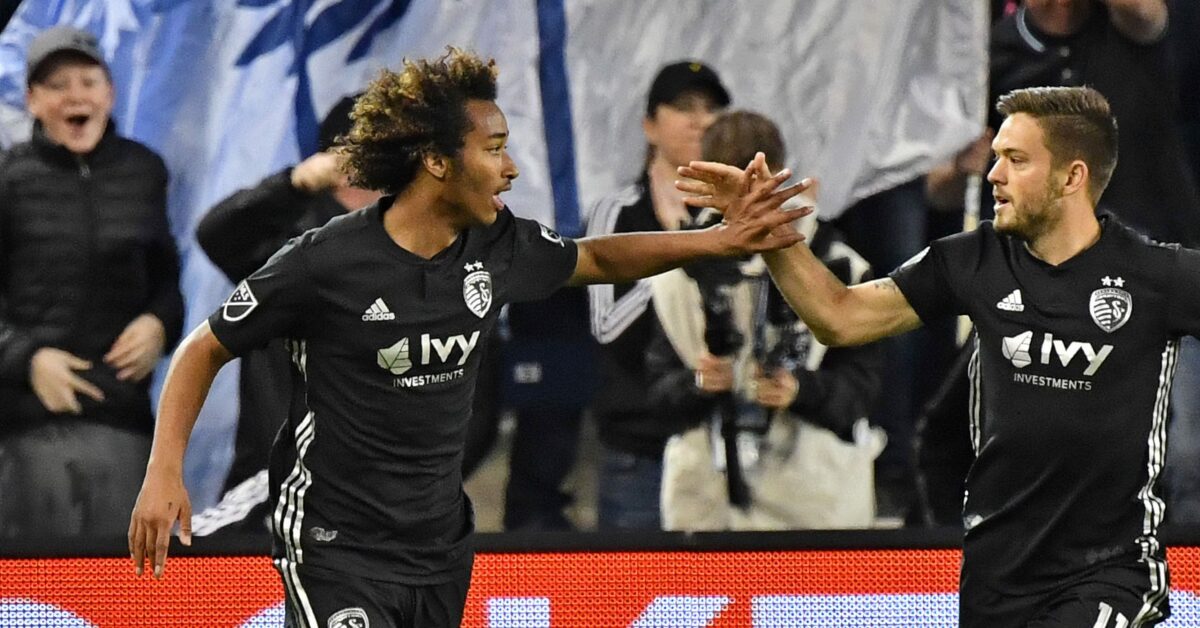 Gianluca Busio may only be 16 years old, but his coaches and teammates see a level of maturity well beyond that of most high schoolers.

The teenage forward/midfielder is on quite a run in MLS play recently. He has goals in each of his last three league appearances, including the 88th minute equalizer in Sunday night’s 2-2 home draw against the New York Red Bulls. He also had SKC’s lone goal in his third career start last weekend against FC Cincinnati and one of the team’s many goals in their 7-1 demolition of the Montreal Impact on March 30.

Sunday night’s goal was a result of being in the right place at the right time, but it showed some strong positional awareness for a teenage player. Krisztian Nemeth swung a corner into the penalty area that fell to Graham Zusi after a punch from Luis Robles. Busio was making a run at the far post, where the ball was slated to land before the goalkeeper’s fist got in the way.

“I positioned myself where we’re supposed to be on corners,” Busio said after the match. “The ball popped out and I saw Zusi was going to hit it, so I backed out to an onside position and luckily it got to me and I tapped it in.”

Being able to recognize a chance like that was pretty big, and it was just the most prominent example of some strong off-ball movement throughout his 34 minutes on the pitch on Sunday night. He routinely moved into threatening spaces and provided his teammates with chances to set him up. On the ball, Sunday wasn’t his strongest performance aside from the goal, but over the course of his brief career he has developed a reputation for being an efficient passer. Overall, he’s impressed to the point where he doesn’t exactly look like one of the youngest players in MLS history.

“I say it all the time, he’s not 16,” SKC head coach Peter Vermes said after the Red Bulls match. “He’s like 25. He’s a very mature kid. He gets it. He’s always in the game and he understands what the game needs. He’s an important player for our club and at the same time he’s making big strides in a short period of time.”

Busio first made waves in 2017 when he became the second youngest player to ever sign an MLS contract at the tender age of 15 years and 89 days. Only the famed Freddy Adu was younger when he joined the league.

He made his debut at the end of July last year in a substitute appearance when he came on at the tail end of a 3-2 loss to FC Dallas on July 28. A week later, he picked up his first start and provided an assist on the only goal in a 1-0 win against the Houston Dynamo. His real crowning achievement of last year was on October 17, when he became the youngest player to score a goal in MLS since Adu 14 years earlier and the second youngest goal scorer of all time.

Like any player that young, he still has a lot of work to do to improve his game. He was a bit timid tracking back defensively and could have been more aggressive in his challenges. Busio wasn’t much of a threat to Kaku out wide in the moments leading up to the Red Bulls’ second goal, allowing plenty of time for Kaku to swing in the floating pass to set up Brian White’s header. He also backed out of a couple 50-50 balls that could have used a bit more aggressiveness.

All of that can be developed without much trouble and the future is certainly bright for Busio. He should have plenty of options when it comes to furthering his career. Sporting Kansas City would love to hang on to him, of course, but he holds Italian citizenship through his father, which means a move to Europe wouldn’t have to wait should overseas clubs come calling. All of that is still a long way away, however.

For now, he credits his teammates for keeping him from developing too much of an ego.

“They keep me humble,” Busio said. “Everybody on the field, they’re old professional guys. They teach me how to be humble. If I get a big head, they’re going to knock me down a couple pegs. The guys around me keep me humble.”