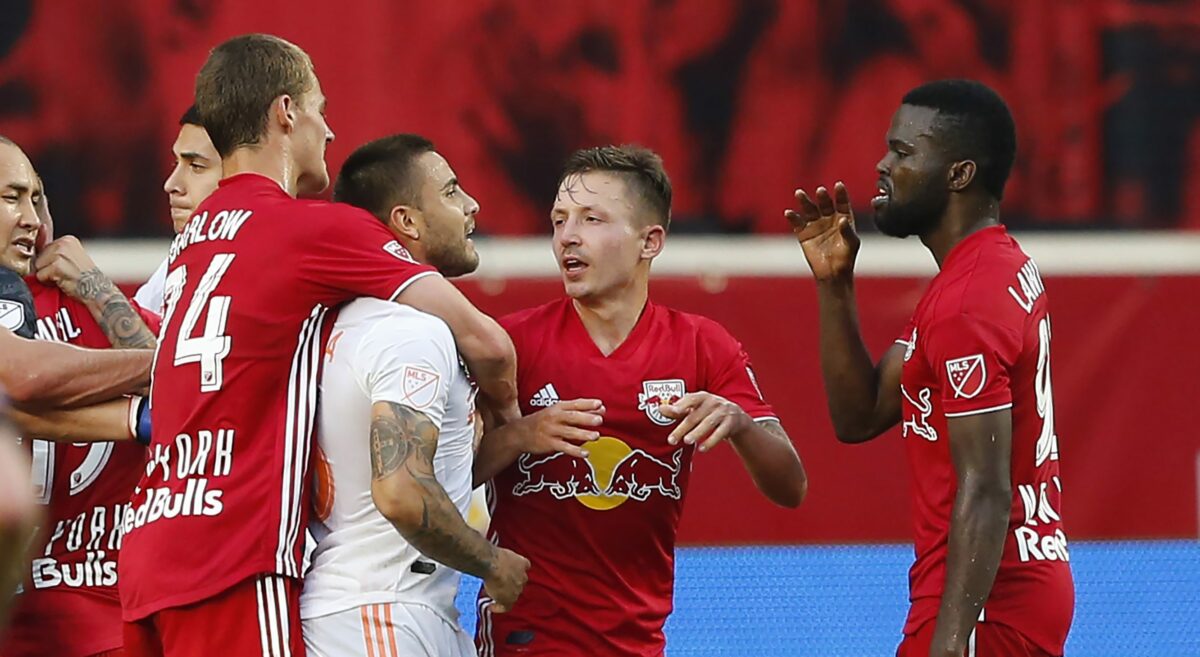 HARRISON, N.J. — It is getting real personal, if it is not that already.

The New York Red Bulls and Atlanta United renewed their not-so-friendly acquaintances on Sunday, and the fireworks at the end of the match were as big a talking point as what happened over the course of the 90 minutes. The Red Bulls posted a 1-0 win at Red Bull Arena despite playing down a man since the 35th minute, but a fracas largely centered around Atlanta United winger Hector Villalba and Red Bulls fullback Kemar Lawrence grabbed a chunk of the spotlight.

Villalba and Lawrence got in one another’s face just as the full-time whistle was about to be blown, primarily because the Paraguayan international took exception to the trash talk and taunting the Jamaican delivered after fouling him. Villalba immediately sought out Lawrence and bumped him with his chest before the two exchanged heated words and gestures, prompting both teams to come together.

“We at no moment have disrespected them,” said Villalba, who left the field after the melee to a chorus of boos that he responded to by gesturing as if he were holding the MLS Cup trophy. “We came last year and we won here, and no one disrespected anybody, so I think we expect the same from the opposing team.

“They’re like that. When they win and everything is good, they disrespect you. When they lose, they don’t say anything and they leave and they don’t remember that we turned it around on them here.”

Lawrence scoffed at the notion that he was being disrespectful when asked about Villalba’s post-game comments.

“If he feels that’s disrespectful, that’s his fault.”

Why Lawrence got so fired up with Villalba in the first place was because of what this match meant to 26-year-old left back. Lawrence was forced to miss last year’s Eastern Conference Finals against Atlanta United because of a knee injury, a series that ultimately ended with the Red Bulls’ elimination and Atlanta United going on to win MLS Cup.

This was personal for him (and something he told SBI back in February that he was really looking forward to).

“I’ve been carrying around a lot of anger because I got injured last year and I missed out one of the biggest games ever for my team,” said Lawrence. “God gave me such an awesome thing to just be on the field and I just had that feeling if I was on the field last year we would have won that game. I had the worst offseason, knowing I was injured, knowing I couldn’t help my team.

“The only thing I could do is text guys or try to motivate guys, so getting back from injury and facing these guys when I’m getting at my full fitness level, it was just amazing and the only thing on my mind was to repay them for how my team felt last year. I felt like we did that tonight.”

Lawrence also stated that the 24-year-old Villalba said something “nasty” in his direction earlier in stoppage time after the veteran defender cleared an aerial ball and laid on the field in discomfort. The Jamaican international did not, however, mention that as a reason for why he was so fired up.

Nonetheless, Villalba, who had a bag of ice on his right knee in the locker room, maintained that he thought Lawrence’s actions were in poor taste.

“I leave with that bitterness and that bad feeling because, like (former Atlanta manager Gerardo ‘Tata’ Martino) taught us, we came here, we won, we didn’t say anything to anyone,” said Villalba. “Today, they win, they disrespect you, they think they’re slick, so you have to do the same to them.”

“I think it’s ugly to have to see another team become a champion on your field. Surely, that has something to do with it,” Villalba later added.

The table is set for a doozy rematch this summer. The Red Bulls are scheduled to visit Atlanta United at Mercedes-Benz Stadium on July 7, a date that players such as New York captain Luis Robles have already memorized in anticipation.

There should be no shortage of motivation in that one for both sides given Sunday’s scuffle, and that will especially hold true for Villalba and Lawrence as they prepare to do battle yet again on the flank.

“I can tell you, to be honest, they haven’t beaten us with me in the lineup. That I know for sure,” said Lawrence. “I don’t know what it is with me and them, but I just want to be in the lineup because I have a feeling they won’t win.”