Emotions boil over between D.C. United and TFC after finally completing their postponed meeting 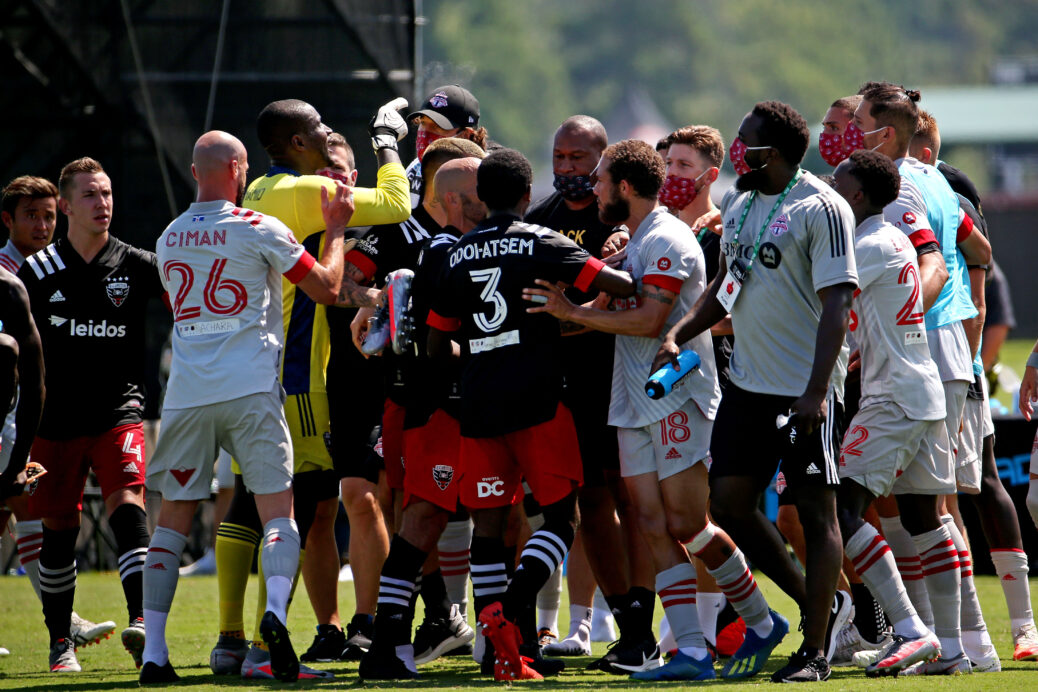 For D.C. United, there was immense excitement. For Toronto FC, there was deep frustration.

Throw in all that has transpired over the last couple of weeks and it made for a volatile concoction.

Toronto FC and D.C. United played to a dramatic 2-2 draw in in their MLS is Back Tournament opener on Monday morning, but the stalemate was not just noteworthy because of D.C. United’s ability to claw back from two goals down despite playing down a man for an entire half.

Following the final whistle, both teams came together for a large scuffle near the benches. No punches were thrown, but both teams argued vehemently and players had to be separated to avoid a potentially bigger conflict in the aftermath of a match that had been postponed multiple times in recent weeks.

“It’s no secret that our boys were a little bit pissed off about how this has all played out to get to this point,” said D.C. United head coach Ben Olsen on Monday afternoon. “But a lot of it is out of (Toronto FC’s) control and out of our control. We’re kind of in this hotel together and we’re eating next to them and we see each other 10 times a day for the last 6-7 days. Then we play a game. We’ve been not let out of our rooms for a day-and-a-half because we had a COVID case.

“Emotions are high and it wasn’t surprising that there was a dust-up. It didn’t surprise me that it was a physical game and there was a red card. I think it was always going to shake out that way.”

Toronto FC and D.C. United were expected to meet last Friday, but the game was pushed back to Sunday due to the Canadian side’s late arrival to Orlando, Florida. The results from the teams’ most recent round of COVID-19 testing over the weekend forced another postponement until Monday, with the official announcement of the game’s rescheduling not coming until minutes prior to kickoff on Sunday morning.

While that development might be understandable given the ongoing nature of the global pandemic, the fact that Toronto FC did not show up to the field for warm-ups on Sunday while D.C. United did raised some eyebrows. Throw in the Toronto FC’s delayed travel and it all rubbed D.C. United the wrong way.

“I think we deserve more respect and we have the feeling that they didn’t respect us, because we were ready two times and they didn’t show two times,” said D.C. United centerback Frederic Brillant, who scored the equalizer in the 91st minute. “Before we start the game, there was tension between them and us and in the end they were frustrated because we came back.”

As far as Toronto FC captain Michael Bradley was concerned, D.C. United’s anger was misplaced. Bradley stated that his club’s actions over the last few days and weeks were not a case of gamesmanship, but the understandable reactions to the challenging circumstances everyone is going through right now.

“We’re in the middle of a pandemic. We’re trying to look after ourselves and look out for each other and in turn look out for any of the teams that we play against,” said Bradley. “In the meantime, if there are some big gaps in certain protocols or guys don’t feel well on days that you’re supposed to travel or you wake up on the morning of one game and somebody has tested positive, it seems to me that prudence and caution have to come first right now.

“We all want to play, we all want to step on the field and compete and enjoy that part, but you also have to be sensitive and have respect for the fact that the level of concern and the level of worry amongst not just players, but people all over the world is going to vary to a certain degree. There has to be understanding for that.”

Toronto FC head coach Greg Vanney added that you could blame his team for the way things had played out in recent days if you wanted, but also said that D.C. United players may have been tapping into the notion that Toronto FC was trying to get a leg up with the delays in order to fire themselves up.

“For them that’s been maybe their mantra to try to get them through this game,” said Vanney, “and to give them the best opportunity in the game was to have that extra emotion.”

Whatever the case, cooler heads apparently prevailed once the teams walked into the locker rooms.

Toronto FC and D.C. United may have gotten into it on Monday, but the tournament is moving forward. So too will the focal points of each of their attention.

“I think it’s done and it’ll blow over and we can now kind of focus on another team,” said Olsen. “We’ve essentially been focused on Toronto for two full weeks, so it’ll be nice to kind of transfer our energy now on New England and trying to get a win or the right result going forward.”