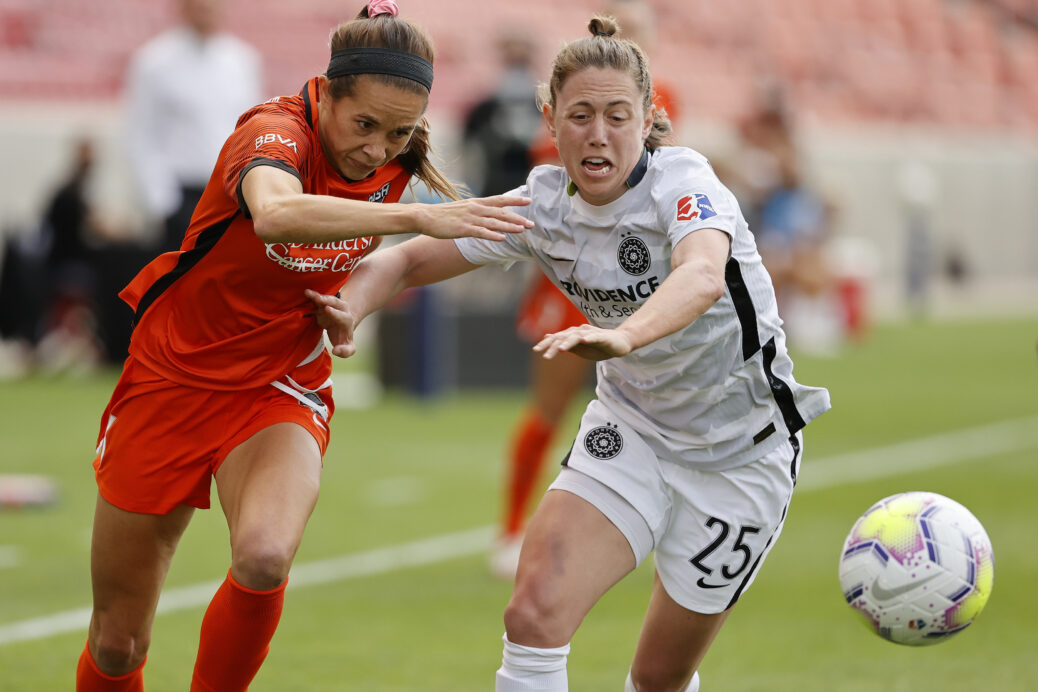 The Houston Dash are advancing to the NWSL Challenge Cup championship match after beating the Portland Thorns 1-0 in Wednesday afternoon’s semifinal game.

Rachel Daly broke the deadlock in the 69th minute when the English international connected on a header. Sophie Schmidt’s original header struck the crossbar, but Daly was in the right place at the right time to put away the game’s only goal.

It was the Dash’s third goal of the tournament off a corner, the most of any team participating in the competition. Daly is now the Golden Boot leader heading into the finals with a total of three goals.

“We only had one goal last year off set pieces,” said Daly after the match. “We’ve got good threats in the air. It’s always good to get on the end of that.”

While the Thorns held the majority of possession, the Dash often looked a bigger threat on the counter. Quick outlet balls to Nichelle Prince were a constant cause of concern for the Thorns back line throughout the match, and their counterattacks also allowed Daly to register the most shots for a player on either team with five.

Portland were missing a lot of important figures in the matchday squad. U.S. Women’s National Team players Becky Sauerbrunn and Lindsey Horan were ruled out with injuries, while Tobin Heath opted out of the Challenge Cup before the competition began.

Still, the Thorns had chances of their own. Christine Sinclair fired a shot over the crossbar in the 41st minute after a ball was played over the top of the Dash’s defense.

Morgan Weaver, the hero of the quarterfinal match who sent the North Carolina Courage home with her first professional goal, almost equalized in the 94th minute. A timely tackle from Ally Prisock, a center back filling in for Megan Oyster after she suffered an injury last game, stifled any comeback opportunity by the Thorns.

The Chicago Red Stars booked their ticket to the Challenge Cup final by preventing a collapse that would have seen the Red Stars lose a three goal lead to Sky Blue FC.

A 3-2 victory on Wednesday night, the Red Stars maintained their three goal advantage until the 72nd minute when a redirected header off a corner bounced toward Evelyne Viens. The forward then pulled off a rare backwards header in front of the goaline to suddenly pull Sky Blue back into the match.

Just five minutes later, Midge Purge took off on a blistering run down the right wing. She rounded the corner and sent a cross directly to Julie Ertz. In an uncommon mistake from Ertz, the Red Stars defender whiffed. The ball hit her standing leg to roll into the net.

A historic comeback stopped there as the Red Stars were able to see out the rest of their match. Sky Blue had numerous chances throughout the match via Paige Monaghan and Ifeoma Onumonu, but they were unable to find a breakthrough.

The Red Stars began the game hot with two goals in the first eleven minutes, and Bianca St. Georges was at the center of both of them. Katie Johnson supplied a pass that St. Georges creatively finished with the outside of her right foot for the first goal, while St. Georges lofted a cross to Rachel Hill for the second goal.

😱 what a way to score your first goal in the #NWSL!@biancastgeorges fires @chiredstarsPR ahead.

Savannah McCaskill continued her strong tournament by scoring the Red Star’s third goal of the match. She drove at the Sky Blue defense and passed to St. Georges. Her teammate returned the favor allowing McCaskill to fire a shot past goalkeeper Kailen Sheridan.

As a club that already surprised people to make it to the semifinals, a full strength team with Mallory Pugh and Carli Lloyd could have potentially made a serious run at the Challenge Cup title.

The final between the Dash and the Red Stars will take place on Sunday, July 26th. The two teams have not played each other yet in the Challenge Cup. It will be the Red Star’s second straight championship appearance, having lost to the North Carolina Courage in the 2019 NWSL title match.