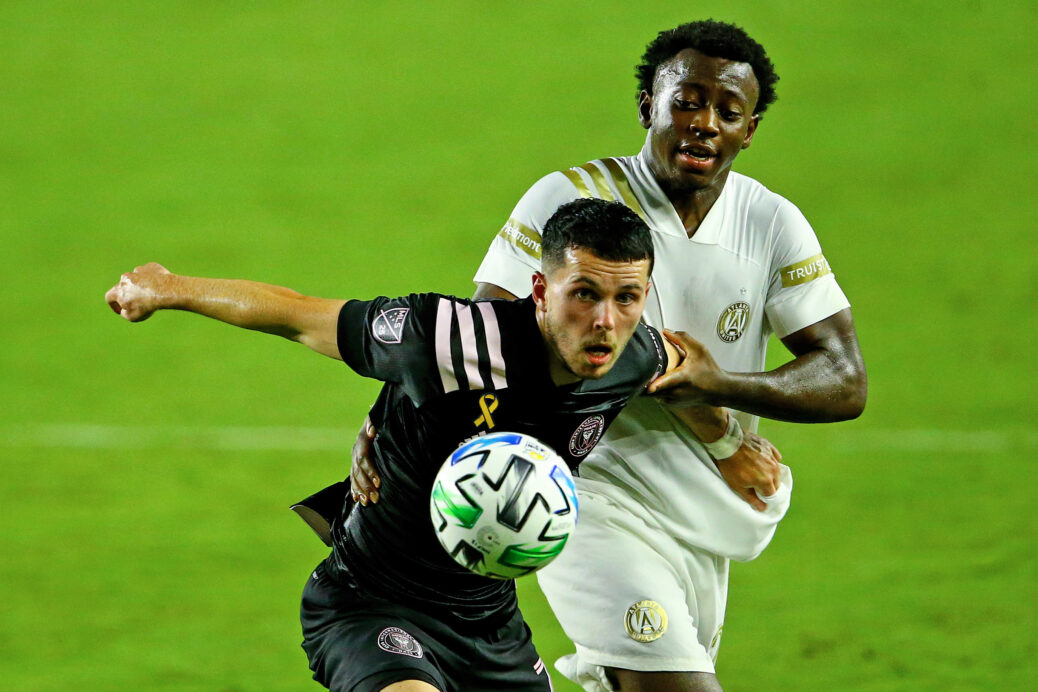 Diego Alonso spoke to Lewis Morgan prior to Wednesday to tell the winger that he needed to take on a bigger role and make a bigger impact.

Morgan enjoyed his best day in an Inter Miami jersey in Wednesday night’s 2-1 home win vs. Atlanta United, bagging a brace that included a stupendous second strike that might just stand as the expansion side’s best goal of the year.

The Scotsman’s clinical finishes will rightfully be what is mostly talked about after this one, especially given Inter Miami’s long-standing struggles in that regard, but he did more than just score. Morgan was also a constant threat down the right side, regularly driving the attack by unsettling defenders and putting them on their heels with his trademark dribbling runs.

Whereas in previous games Morgan settled mostly for whipping in a dose of hopeful crosses from the wing, he took matters more into his hands in this one. He looked much more aggressive, decisive, and confident — which was surely a byproduct of him scoring, at least partially — and gave Inter Miami the type of secondary attacking threat that it needs to help prevent defenses from zeroing in on just Rodolfo Pizarro.

It must be noted that Morgan’s passing was a bit off throughout the match, and he faded, probably due to fatigue, before coming off. That said, it was when he got involved that Inter Miami was at its most dangerous Wednesday and when he wasn’t that Atlanta United was able to find more of the game.

This was a huge performance for Morgan, and one certainly to build on.

Nicolas Figal has been Inter Miami’s most consistent and thus best player this season, regularly turning in steady to very good performances at the back.

Wednesday night, however, was an entirely different story for him.

Figal endured what was, on an individual level, his roughest night of the 2020 season. From the opening whistle, the centerback-turned-fullback just did not seem to be mentally focused and sharp. He mis-hit passes he regularly makes, struggled with his defending, and even gifted Atlanta United a counterattack with a poorly-executed free kick played low and across the field.

All that is to say nothing of the needless and reckless foul he committed to give up the penalty kick late in the first half. Truth be told, Figal was lucky not to get sent off there for sending a forearm into the face of Jon Gallagher.

Even so, that was essentially it for Figal on the night. Alonso had seen enough and pulled Figal at halftime.

“He had an unfortunate night,” said Alonso in Spanish. “He’s a player that has been very consistent, maybe the most consistent on the roster, and today was not his best day. He needs to recover quickly because he is a player that we need.”

No player is immune to a bad game, and Figal will surely be back in the lineup this weekend. Still, this was one to forget for him.

It would be unjust to talk about this game and not mention the performance of Ben Sweat, who is slowly but surely becoming a more important player for Inter Miami.

Sweat continued his recent run of good form with a precise assist on Morgan’s golazo, but more than that the veteran left back continued to provide an overlapping and dangerous threat down the flank.

The defender is looking more and more confident, too, as he is starting to play less safe and take players on with a little more frequency. One play in the second half demonstrated that perfectly, as he pulled off two successive cutbacks to create space for himself near the sideline.

If Sweat can keep this up, Inter Miami may soon rack up more goals and win more games.

Luis Robles (8) — The back-to-back penalty stops were game-savers, and he also had a number of other good stops and interventions.

Nicolas Figal (3) — Just did not seem himself from the opening whistle, and should have been sent off for his needless forearm in the box.

Andres Reyes (5.5) — A bit unlucky on Atlanta United’s equalizer, but was not as good as he had been in recent outings. Also gave up a late foul in a dangerous spot.

Leandro Gonzalez Pirez (6.5) — Solid at the back yet again, breaking things up regularly vs. his former side and winning almost every aerial ball that came his way.

Ben Sweat (7) — Looked confident in the attack again, was not troubled defensively, and set up Morgan’s game-winning golazo with a good feed.

Jay Chapman (5) — Had one really good pass that lead to a near chance, but other than that this was a fairly quiet 60-minute outing.

Victor Ulloa (6) — Got stuck in a little more on the defensive end than he has for much of the year, and moved the ball well.

Lewis Morgan (8.5) — Two clinical finishes helped pick up a sorely-needed win, but he was also a constant threat down the right with confident dribbling runs and put in some defensive work as well.

Rodolfo Pizarro (6.5) — Dished out a well-weighted pass to set up Morgan’s opener and did a lot of running around to grind out the win. Should have done better on his early chance, though.

Brek Shea (5) — Chipped in defensively during his hour on the field, but did not do all that much in the attacking third.

Robbie Robinson (5.5) — Set up a great early chance that should have been put away and was aggressive and energetic throughout. His touch wasn’t there, however.

Juan Agudelo (5) — Was limited to doing mostly defensive work during his 30 minutes, which he did a serviceable job of on the left wing.

Blaise Matuidi (5) — Brought some more physicality to the midfield as the team tried to close this one out, but was not overly involved.

Julian Carranza (5) — Rarely saw the ball as the squad went into preserve mode, though he contributed by tracking back a bit to help defend.

Wil Trapp (5) — Had a couple of nice long passes as the No. 6 and took up good defensive positions in his 15-minute stint.

Diego Alonso (7) — It seemed like he might have gone into defense mode a tad early, but got Morgan to play more aggressively and correctly realized that Figal needed to be removed at halftime.