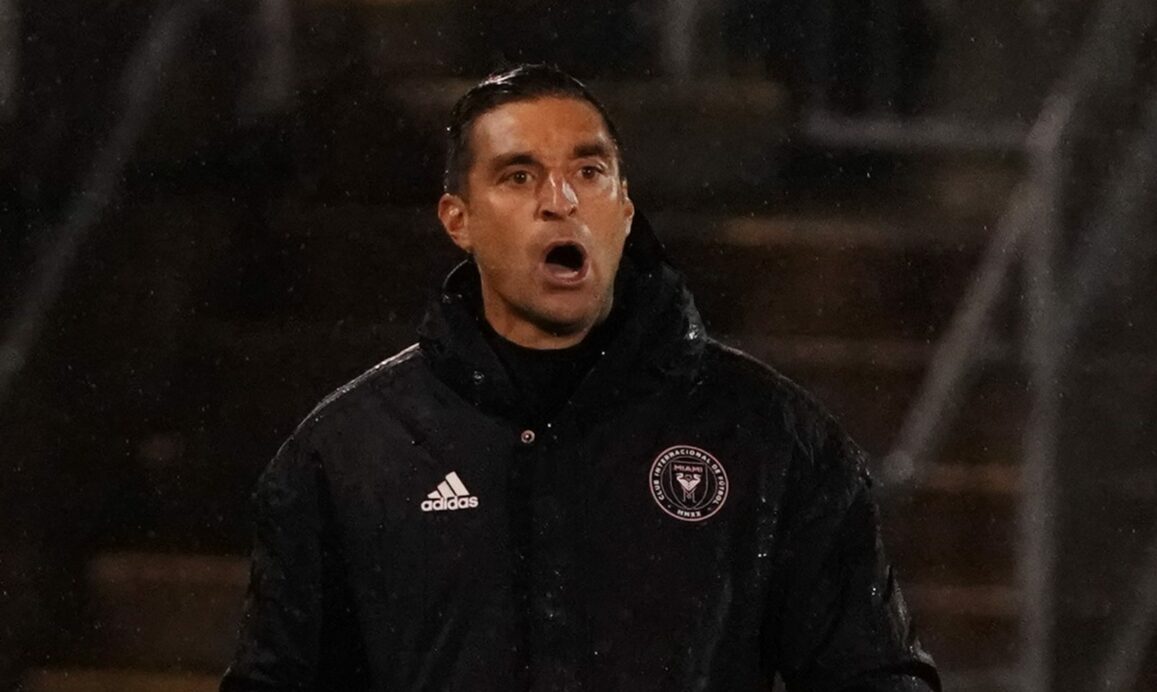 One criticism of Inter Miami head coach Diego Alonso this season that has been written about at different times in this space is his use of substitutions. The Uruguayan head coach has at some points waited too long to make some or been a bit too reactive with them.

Sunday was an example of both.

Inter Miami missed out on another big opportunity to position itself well to make the playoffs on Sunday night, giving up a one-goal lead and losing, 2-1, to Toronto FC. The defeat left Inter Miami in a precarious and complicated situation heading into the final weekend of the MLS regular season, and a major talking point after the match was Alonso’s delay in making subs.

Alonso waited until after Inter Miami fell behind to begin to make changes in the 85th minute, subbing in four players at once as the expansion side chased the result. It proved too little too late, of course, but it has to be noted that Alonso, as he stated afterwards, was a bit hamstrung by the personnel he had available.

“To put someone on you have to understand that you have to improve the team,” said Alonso in Spanish when asked about his substitutions. “If you can’t improve a certain facet and if the players that are playing are doing it well, then it’s difficult to take someone out. For example, it was tough for us to put in another centerback and improve that situation.

“…It was difficult to make any adjustments defensively and in the attack we had the sensation that the three offensive players — (Lewis) Morgan, (Rodolfo) Pizarro, and (Gonzalo) Higuain — are players with the most quality on our squad and surely amongst the best in the league as well and they could win us the game.”

There is rationale behind not wanting to break things up defensively. After all, not having any proven natural centerbacks in the squad due to varying reasons led to Alonso going with a makeshift five-man back line that saw Alvas Powell, A.J. DeLaGarza, and Christian Makoun play in the middle of in order to close down and limit the space Toronto FC had to play in.

Still, once Toronto FC moved out of its 4-2-3-1 formation and into a 4-4-2 look the game changed. The Canadian side began to find more space between the lines to play in, and was getting into more advanced spots high up the field.

As a result, Inter Miami’s lack of possession became more noticeable because it appeared that at any moment Toronto FC could score. The match seemed to be calling out for Inter Miami to insert another midfielder like Victor Ulloa to help close the gaps, but to do so Alonso would have had to lessened his back line or attack by removing a player from there.

Alonso was reluctant to do so, but his gamble ultimately did not pay off and now he will bear the brunt of the post-game criticism.

Recurring issues on both sides of the ball

Inter Miami’s season has been underlined by two chief recurring issues: An inability to generate much danger in the opponents’ penalty area and a knack for making mistakes in its own.

Both were on full display in the demoralizing defeat.

Ayo Akinola is too strong! 💪

First, there were the individual errors that overshadowed what was otherwise a solid defensive display against a Toronto FC side that was also missing several starters. The makeshift back line that Alonso turned to put in a good shift by and large, especially in the first half, but those costly gaffes that have been seen time after time this year reared their ugly heads yet again.

The initial one came in the 55th minute via the out-of-position Powell, who was playing centrally. Powell failed to attack a cross coming his way and instead opted to try and position himself to clear it, a decision likely made because he is both not a centerback and has lost match sharpness after not playing since July. What that resulted in was Ayo Akinola overpowering Powell and finishing with aplomb.

The second major blunder came via the mistake-prone Ben Sweat in the dying minutes, though Richie Laryea could probably win an Oscar for his portrayal of a fouled player. Sweat made the poor decision to kick out at Laryea, whom the Inter Miami left back had turned away from goal on the play, and the Toronto FC substitute used that ounce of contact to sell an Olympic-style dive.

Those were not the only problems Inter Miami had, though. While they stand out more because they directly led to goals, Inter Miami’s attack once again did not come up with many at the other end and was largely ineffective. Pizarro was largely a passenger in this one, Higuain had to drop repeatedly to find the ball, and Inter Miami finished with just two shots on target in its 16th match in 2020 in which it was held to a goal or less.

Clearly, that type of production combined with the individual issues in defense is a recipe for defeat. It explains perfectly, however, why Inter Miami is on the brink of finishing the year as one of the worst sides in MLS.

If there was one major positive in this one from Inter Miami aside from how well the depleted defense peformed for much of the 90 minutes, it was Higuain’s passing.

The Argentine striker dropped into deeper spots repeatedly to find the ball and subsequently released an array of superb passes that helped Inter Miami threaten in the attack. Most notably was his sublime aerial clip to a darting Morgan on the diagonal run in the first half, though the finish from the Scotsman wasn’t there.

Now obviously Inter Miami would prefer Higuain to be getting on the end of things — like he did in that play in the second half in which he trapped the ball incredibly before smacking a curler off the crossbar — rather than creating. Still, it is not a bad thing to see Higuain facilitating for others to try and generate danger, especially given the well-documented issues Inter Miami’s attack has in getting him the ball in the final third.

John McCarthy (4.5) — Didn’t have much to do, but his decision to not make a diving attempt on the penalty will be his most remembered contribution in this one.

Dylan Nealis (6) — Pressed well and was the Inter Miami player with the most touches. Not at his sharpest when in the opponent’s half, though.

Alvas Powell (5.5) — Needed to attack the ball rather than wait for it on the equalizer. That said, he was mostly solid the rest of the way.

A.J. DeLaGarza (6) — Had some timely interventions despite being the centerback on the team with fewest touches.

Christian Makoun (6.5) — Delivered a lot of no-nonsense defending and a good pass to Higuain that led to the decent look from Morgan in the first half.

Ben Sweat (5.5) — Bit hard done-by on the penalty call, but a player of his experience has to know better there. Was effective getting forward, however.

Blaise Matuidi (7.5) — His goal was perfectly placed in one of the only spots it could go in, and his passing was also pinpoint at an even 92 percent.

Lewis Morgan (7) — Great hustle and work down the right to help set up the opener. Also had plenty of good service from the wings.

Rodolfo Pizarro (5) — Got on the ball often, but had very few positive moments in the final third.

Gonzalo Higuain (6.5) — One of the team’s highlights in this one was his passing, and he was denied of a superb go-ahead golazo by the crossbar.

Julian Carranza (N/A) — Came in too late to make an impact, though he wasted one possible chance by committing a foul when positioning himself.

Federico Higuain (5) — Got involved on a near-chance almost immediately after coming on, but overall too few touches in a late cameo.

Diego Alonso (5) — The defensive performance he got from a team down three starters was by and large very impressive, but his decision to not use his subs until after falling behind put a large dent in how he managed this one.