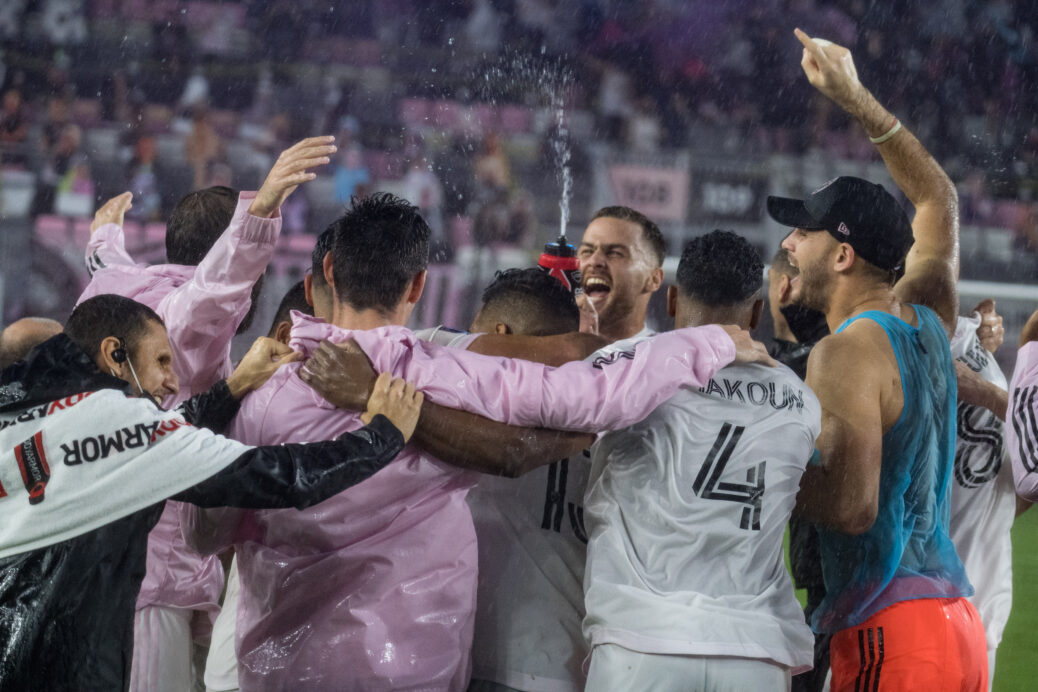 FORT LAUDERDALE, Fla. — Diego Alonso said just a few days ago that he would not scoreboard watch on Sunday as his Inter Miami played for its postseason life.

The significance of the moment got the better of him in that regard, but not of his team, which overcame tough odds, a nervy finish, and the wrath of Mother Nature, to boot.

Inter Miami celebrated qualifying for the playoffs on the final day of the 2020 regular season, defeating FC Cincinnati, 2-1, in a home game played in unfavorable conditions due to nearby Tropical Storm Eta impacting the area. The victory at Inter Miami CF Stadium combined with several outside results in games played simultaneously around MLS ensured the South Florida side punched its postseason ticket, punctuating an expansion campaign filled with plenty of challenges on and off the field.

“We are in the playoffs and that is a big step for us.”

We call that a GOLAZO-AZO-AZO!

Mikey Ambrose with a top class strike to give us the lead! #InterMiamiCF | #DecisionDay pic.twitter.com/Wgnd8l9xlx

Plagued by a steady dose of inconsistent performances after getting off to a record 0-5 start to the year, Inter Miami entered Sunday afternoon’s bout in 12th place in the Eastern Conference. Alonso and his men knew that only a win vs. the worst team in the league would give them a chance at reaching the playoffs, and even that did not guarantee anything.

Thankfully for Inter Miami, both Atlanta United and the Chicago Fire lost their respective games vs. the Columbus Crew and New York City FC. Those results coupled with a 2-1 win vs. FC Cincinnati that came courtesy of first-half goals from defenders Mikey Ambrose and Leandro Gonzalez Pirez was enough for the Herons to finish the season just above the red line in 10th place.

“I’ll be honest, near the end when there was little time left, I asked one of my assistants how the other games were going,” said Alonso, who let out an emotional roar when the match ended. “I asked during stoppage time and he told me, and that is why I was so euphoric at the final whistle.”

Of course, Inter Miami’s players did not know a whole lot about what exactly was going on in the other games when the ball stopped rolling in their match. They had inquired at halftime in the locker room, but were not getting many scoring updates from the coaching staff during the 90 minutes.

“The reality is when the game went final I honestly did not know any result,” said Gonzalez Pirez, who scored the winner. “I knew a little at halftime that Chicago was tying and Atlanta was losing and I did not know much about D.C. (United), but when the game ended I quickly went to ask because I did not know whether to celebrate or not.

“…When we found out we were in, we exploded and began to jump and celebrate.”

True to form in a season in which nothing has come easy, Inter Miami suffered a good bit on Sunday before locking up the playoff berth. The Florida team struck twice in the opening 25 minutes and looked then like it would cruise to the finish line, but a sensational strike from Joe Gyau in the 66th minute combined with centerback Andres Reyes’ 88th-minute ejection made for a tense finish.

Inter Miami hung on, however, despite the adverse circumstances on the field and with the inclement weather.

“That was horrible,” said Ambrose, whose 19th-minute opener marked his first career goal. “I have played in some games with horrible weather before … but this one was probably the worst one. The wind wasn’t in our favor in the first half and then against us in the second. It kept changing directions. It would be going one way and then it went the other way. It was crazy.”

Inter Miami, forgetting about the storm for a few minutes, celebrated on the field and gave a nod to the announced crowd of 2,703 fans in attendance after the game went final. The festivities will be short-lived, though, as the focus shifts towards the first round playoff match vs. Nashville SC. The two expansion sides will meet on Nov. 20 in Nashville, Tennessee, in a one-off game that Inter Miami believes can be the start of a deep run.

After all, Alonso and his players are seeing the playoffs as newfound life.

“We have been saying since we won the game that this is a new season now,” said Ambrose. “Everything that happened in the past, all that stuff we went through, it does not matter now. It is a new season. We are looking forward to the next game and now it is playoffs so it is one game at a time. Every game is a championship so it is going to be fun.”