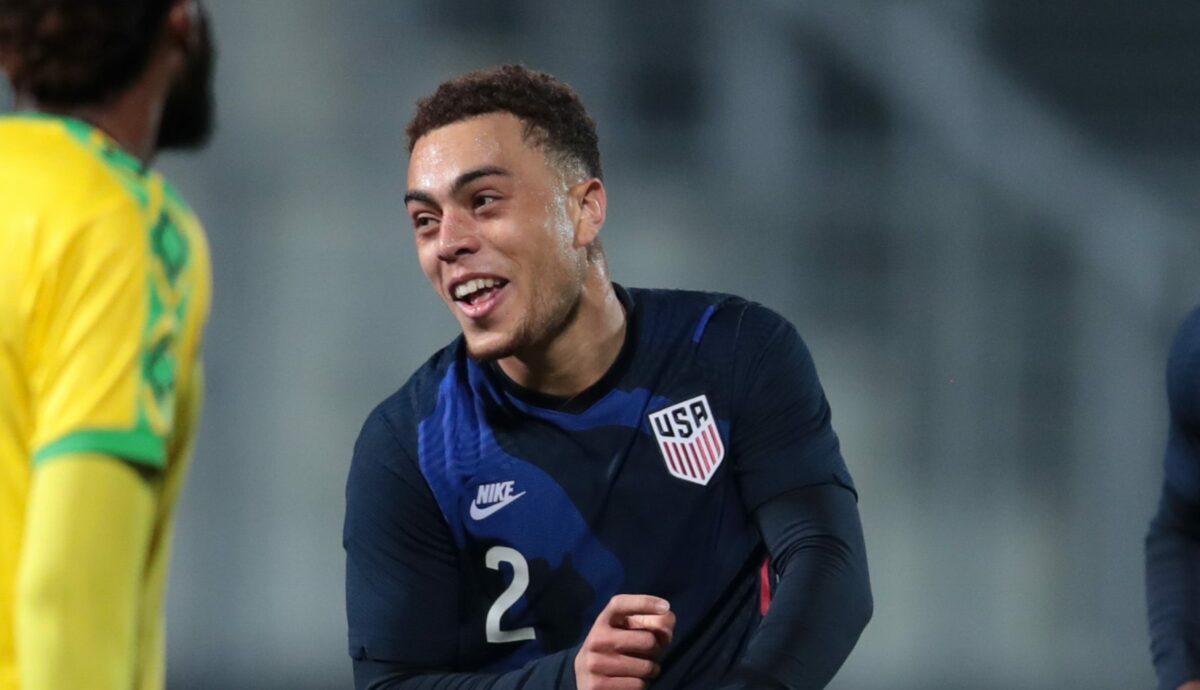 Sergino Dest opened his scoring account with FC Barcelona over the weekend, and he said on Tuesday that he wanted to do the same with the U.S. Men’s National Team this week.

The USMNT recorded a fourth straight win on Thursday by picking up a 4-1 friendly victory vs. Jamaica, but the scoreline did not fully tell the tale of how tight the game was at one point. The Americans and Jamaicans were locked in a stalemate in a tight and somewhat drab first half, and it was not until Dest provided a moment of individual brilliance that the game opened up.

Dest scored his first international goal in the 34th minute of the match at the Wiener Neustadt Stadion in Austria by unleashing a ferocious right-footed shot from distance after dribbling forward from near midfield.

“First of all, Segino is sick,” said chuckling midfielder Brenden Aaronson, using the slang term for great. “He is so good. He is playing left side first of all — it is hard enough — and then he comes in on his right and bangs a shot far post. I did not expect anything else. He has that quality. You saw it with Barcelona on the weekend and to give us that lead off the bat is also great because they were hard to break down at first.

“We needed something special and Sergino gave that to us. What a player.”

The #USMNT defender cuts inside and fires home a ROCKET for his first international goal! 🚀🇺🇸 pic.twitter.com/F5jxhkpACy

Sometimes when things are not working from the run of play collectively, you need individual talent to step up. Dest did just that and on the heels of a two-goal performance for Spanish giant FC Barcelona this past Sunday.

“It is really special,” said Dest. “I was playing left back so I was just thinking to myself, ‘I have to score. I have to keep this level,’ and I was looking to just come in with my right foot and just shoot. Obviously, look, I can also shoot with my left foot, but today I felt there was a lot of space in the middle so I had to cut inside.”

Making it all the more impressive was not only that he told USMNT head coach Gregg Berhalter that he would score vs. Jamaica, but also that he did so in his first game back in the left back spot. The 20-year-old defender has been playing exclusively down the right at Barcelona, but that did not stop him from making an impact both with his goal and overall play during a 67-minute shift.

“For me personally it is not that hard (to change positions),” said Dest. “I can play on both sides. Right back is good for me and left back is good me. I do not prefer any, to be honest. I just like to play the game and it does not matter for me which position I am in.”

Whether that is Dest being honest or diplomatic is up for interpretation, but it seems very likely that he will continue to get looks out on the left flank with the USMNT for the foreseeable future. There are several options to play on the right side of the defense, including Thursday’s starter Reggie Cannon, but not as many on the left.

That combined with Dest’s impressive versatility is why Berhalter has used the talented youngster on the left and why the coach will probably continue to do so in the short term.

“Regarding Sergino it is left or right and it just depends on the personnel that we have in camp, it depends on who is in form in the left and right back positions,” said Berhalter. “Antonee (Robinson) is a guy who came and did really well. We have Reggie, we have Bryan Reynolds on the right, we have DeAndre Yedlin on the right.

“We have a ton of people on the right and sometimes it may make sense to play him on the left.”

If that is the case, then Dest will need to continue to get more reps with left winger Christian Pulisic. The two played together for just the second time ever vs. the Jamaicans, meaning their understanding and chemistry is still a work in progress and something that has to be fine-tuned and rehearsed ahead of the more important matches that are to come later this year.

Still, the early signs with regards to Dest playing on the left have been promising. Thursday’s game, with his golazo included, was just the latest one.

“When somebody has the ability to do that like Sergino … it definitely takes that load off your back (as a team),” said midfielder Sebastian Lletget. “It is special to see.”