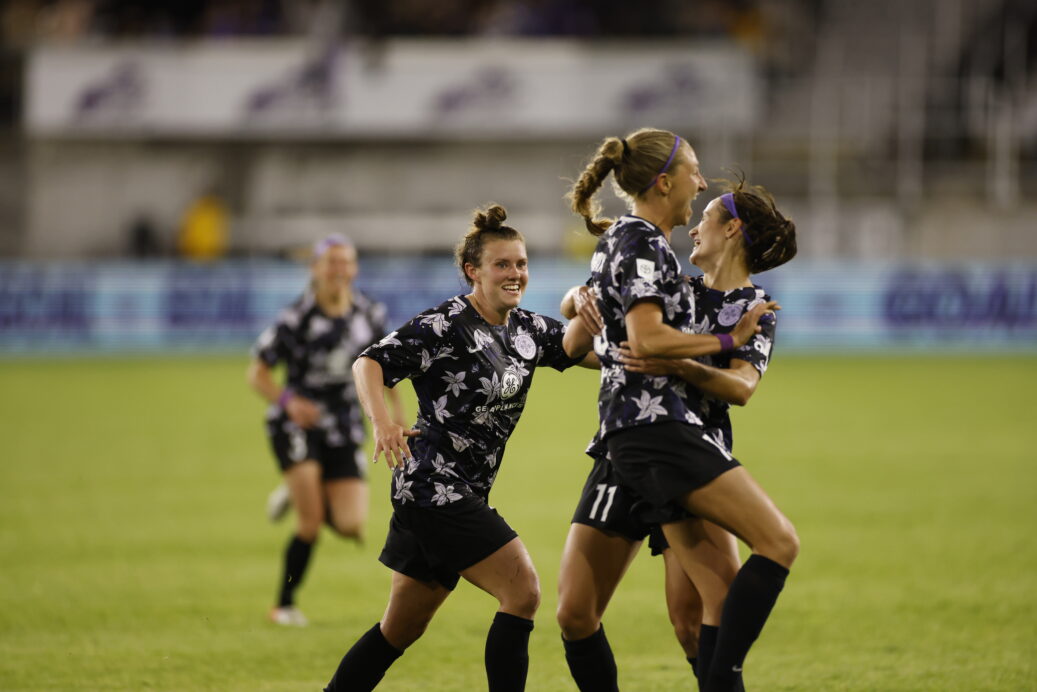 LOUISVILLE – There was a lot of rain, initial joy, heartbreak, and then triumph all on display in 2021 National Women’s Soccer League expansion side Racing Louisville’s inaugural home opener at Lynn Family Stadium on Saturday night.

There was even a rainbow hovering over the stadium shortly after the home team took the lead.

Taking on the Orlando Pride to open up the 2021 NWSL Challenge Cup campaign, the new kids on the block let an early lead slip, but managed to send the 5,300 fans in attendance home happy with a dramatic stoppage time goal to settle at 2-2.

When watching an expansion team for the first time, there’s always some degree of expecting a rude welcome to its league. Orlando equalized just before halftime and pulled ahead in the 88th minute, and the game looked stolen.

But no, there was some extra time magic.

Working with a generous six minutes, Louisville made the most of its final opportunity, and defender Brooke Hendrix goes down as the hero. Her teammate Freja Olofsson batted down a set piece ball at point-blank, Hendrix was there, and delivered a calm finish.

“I saw it was at 90 minutes, and I was like ‘Alright I’m going for it,'” said Hendrix. “It went in and I kind of blacked out, I’m not gonna lie. I was just running around screaming and yelling, I honestly didn’t know what to do but I was so excited.”

“I learned that I don’t know how to celebrate a goal,”

The second was more dramatic, but the first represented a couple of meaningful firsts.

Making her mark as not only the first goal scorer in team history, Cece Kizer earned the first of her career when finished a through ball from Emily Fox. Kizer, formerly of the Houston Dash, has waited three years for the moment.

“I just kept telling everyone today, I was like ‘If I score today it’s gonna mean so much to me and I’ll probably cry’, which I teared up a little bit,” said Kizer. “Coming here, I just really wanted to make a name for myself because I was playing behind great players at Dash and I knew I had a really good opportunity here. So, scoring that goal just means the world to me.”

It’s been a very long and hard journey but it’s been really fun to see my hard work pay off.”

That experience did not make one bit of difference, though.

Louisville came out of the gate pouring on the pressure, and should be left frustrated about a pair of early opportunities which saw Yuki Nagasato with the opportunity to punish Harris for being dangerously off her line on the counter, and another where she got a ball at point blank but fumbled the shot.

“I think we probably should have had one or two goals at the very least,” head coach Christy Holly said of the opening sequence. “We’re young, we’re naive, and we definitely left ourselves exposed at different times.”

Not to let the disappointing moments outshine the special day, Holly put the result aside.

“I’m definitely frustrated and I think there’s many things that we can do better, but this was a day the owners, the management, the players, and the fans all deserved”

Challenge Cup action rolls on, and Louisville travels for a meeting with the Washington Spirit on Thursday. Both are trailing the North Carolina Courage in the Eastern bracket of the competition.